40 MORE Of The Worst Rob Liefeld Drawings, Numbers 20 Through 11.

Share All sharing options for: 40 MORE Of The Worst Rob Liefeld Drawings, Numbers 20 Through 11. 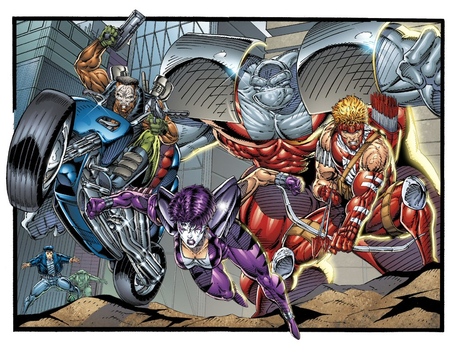 Youngblood was basically just a long social experiment where Rob Liefeld revealed he didn’t know how things worked, or were supposed to work. The main character of Youngblood (arguably, I guess) was a guy named Shaft who was a bow-and-arrow guy, but his bow didn’t have a string. It just fired arrows through…technology, I guess. But it was the first real example of "I don’t like figuring out how things work, so I’ll stop drawing them. Check out Shaft in this picture. He’s about to fire two arrows of differing sizes without a bowstring.

But there are much more egregious examples in this very panel that suggest Rob doesn’t know how things work. To wit, Badrock/Bedrock’s shoulder pads. Look at his right shoulder pad. How’s that thing staying on? Magic? Is it some sort of spoiler-type system where there’s a strut attached to his shoulder that allows the shoulder pad to hover like that? Why would that be happening? Also, look waaaaayyyyy off to the left there. See that blob emerging from the other side of the motorcycle? That’s Be(a)drock’s right hand. Try to fill in the rest of his hand and arm with your mind. I’ll wait here while you scream.

Okay now: the motorcycle that Chapel is driving. Well, "driving," because he is holding a gun in each hand and holy shit look at that fuckin bendy bike. Just wheelie-ing in sad, static limbo while Chapel leans waaaayyyyyy forward over the handlebars (check it out; his knees are in his armpits). Is he performing the world’s first and only motorcycle-ollie by gripping the hog betwixt his thighs and yanking upward to be a badass? Probably!

And of course, the ultimate thing that Liefeld doesn’t understand: a lady’s body. Boob-flopping; giant thighs terminating into her shoulders; pelvic shelf somehow visible from this angle. Her tits-half is clearly, in no way, connected to her thighs-half. Just horrifying.

And of course, never sleep on Liefeld’s depictions of "bystanders reacting," because it’s almost always a dude in a halfsie leather jacket and a beret, standing with legs farther than shoulder-width apart and arms held out at his sides, the way no one does.

HOLD ON TO YOUR BUTTS
I don't know what my favorite part of this is, the fact that Liefeld couldn't draw a clean half-circle for the moon and made it diamond shaped or Sunspot's epic pouch-suspenders with matching codpiece. Wait, I know, it's the WORST ARM EVER DRAWN attached to the tallest Steven Seagal in a neckerchief ever attempted. Or maybe it's Domino's right boob jutting out of the side of her ribcage and dwarfing her shoulder. Is she holding a super soaker? What's that tube for? And why did she wear a one-piece v-neck bathing suit to the moon?
Liefeld gets extra points here for hiding every single foot and just arbitrarily deciding how big and how much of a floating head everyone should be. The right half is clearly the only cover he intended, and the left half is his sketch notes. Nobody would give EVERYBODY on the team thigh pouch belts. I think the tall guy is how Rob Liefeld sees himself. 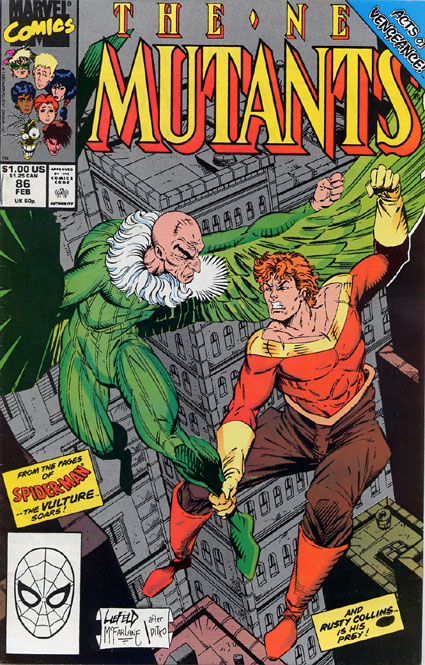 This is probably the only type of Liefeld fashion that even he would be embarrassed drawing in 2012. Off-the-shoulder Flashdance-style spandex unitard, over which is worn bright orange gauntleted gloves and pants that look like he’s late to a potato sack race. But despite all of that, HOW HORRIFYINGLY SKINNY MUST THE VULTURE’S CALF BE JUST ABOVE THE ANKLE? Because that is a fist that Rusty is making, and there is no way that the Vulture’s leg would fit inside of there. Also, if you look notice at the end of the Vulture’s leg there, his right foot is on his left leg.

And that was the last time Rob Liefeld drew a foot.

As an aside, this is the most Acts of Vengeance/1990 cover ever. Todd McFarlane inking a Rob Liefeld drawing, with a huge fuck-off signature box alerting you to that fact; two dutch-angle narration boxes (one with a smudged-out typo that went on through to the printers!) AND a Spidey UPC AND a corner crossover denotation PLUS a cover dedicated to a fucking superhero whose superhero name is RUSTY. 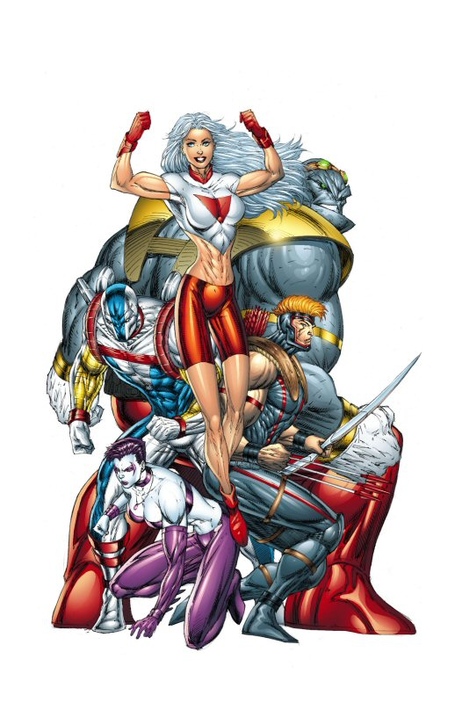 We try to have fun with these, but the point you need to take away isn't that we're funny, it's that Rob Liefeld cannot fucking draw to save his life and should have every dollar he's ever earned taken away so he can work in a mill somewhere and Neal Adams can have his Conan sword.
Anyway, the ridiculous group pose in the background is funny, but Suprema is a total mess. Besides her elf boots, yoga shorts that aren't really yoga shorts because he just drew lines across her stomach and legs and colored the inside red and t-shirt that doesn't have sleeves, contours to her weird underarm muscles and comes to a point in the middle (Rob Liefeld has never seen clothes), her body is royally fucked. Look at her abs. I think Rob's so used to drawing women from behind with their backs bent and asses out that he blanks on what a stomach looks like, so he just draws a back in the front. How many lines does it NEED, Rob?
The worst part is her right bicep. Her upper arm is just a thigh with a forearm and a hand on the end. It's a fucking thigh, look at it. Compare it to her other arm. That's a thigh too, but Jesus. If you draw something and it looks like garbage, you can draw it again. Or erase it and redraw that one tiny part. Don't fart onto a blank page and send it in to be colored. That's why they put so many fucking lens flares on it. 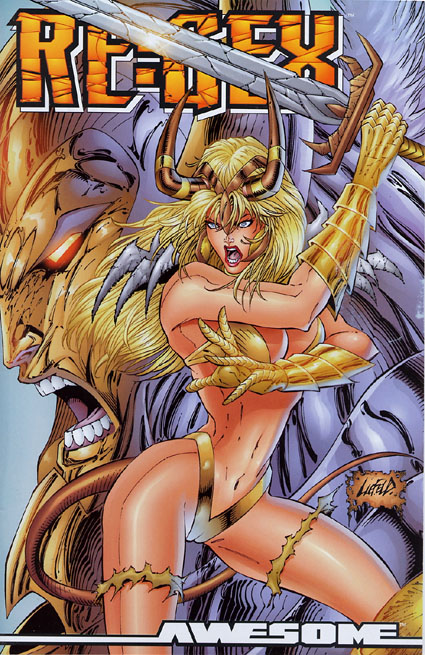 More Re: Gex goodness for you here. Wait, not "goodness." What’s the word? Oh yeah, "blech."

Well Rob, you finally did it. You just went ahead and drew a vagina. Them’s the labia majora. Well done.

One last comment on this piece. Open your hand, with the fingers extended. Hold that hand up next to your head. I bet your hand isn’t longer than your head, right? Now look at this lady’s clenched right fist. now compare that fist to the length of her face. Just sayin’. 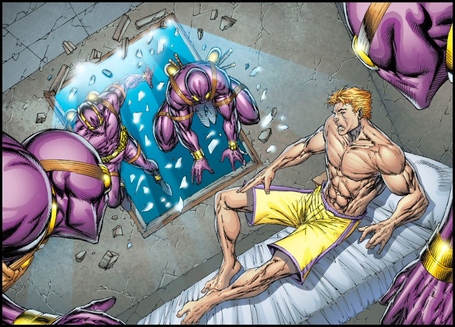 Three major questions here:
1. If these guys are crashing in through a window, why are rocks flying everywhere? Is that supposed to be pieces of the window?
2. Why is he surprised to find guys jumping through his window if two guys just waltz into his front door? If they can walk in on him all willy nilly, why are these guys bothering to leap through the window headfirst? Is this Lupin? Christ.
3. The window guys don't need to do much -- somebody's already broken the guy's index fingers and big toes. Holy shit, look at those things. He's got a thumb for a toe and a witch finger.
And no nipples. And his Lakers shorts are crammed into his asshole, apparently. Okay, more than three questions. 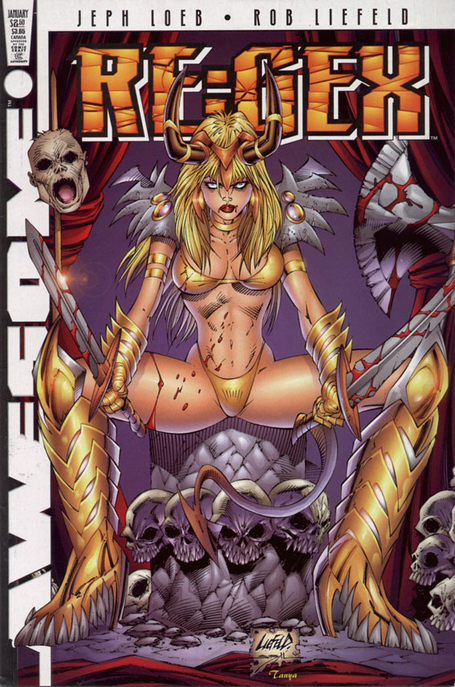 One last look at Rob’s gross "Re:Gex" whateverthefuck. The bendy-swords are in full swing here, but if you look at…I dunno, Thong-erella?...here, you can notice that his refusal to re-draw anything that conflicts with anything else extends to basically every part of this cover. Her left hand is not really attached to her wrist. I will bet any sum that the bloody axe-head on the right side of the image is meant to be a part of her sword that is sort of-but-not-quite bending off the edge of the panel there. Also, there is absolutely no way that this character is mean to be sitting on that skull-adorned pillar or whatever frigging thing that is meant to be. It looks like she’s popping a gnarly squat right in front of that thing, but of course if it is meant to be a pillar, he didn’t draw the rest of it behind her. 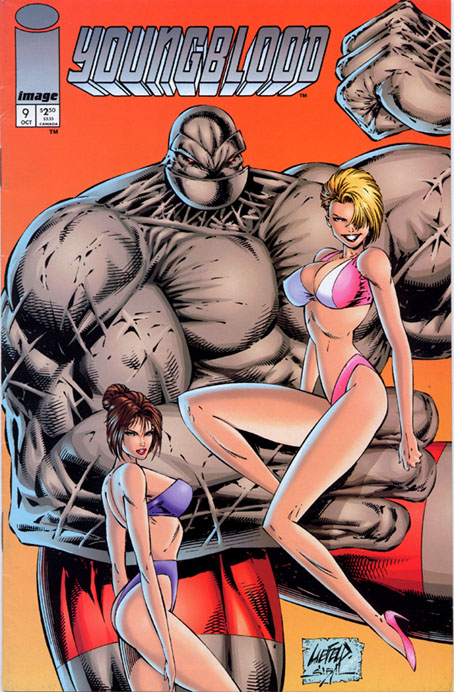 Ladies and gentlemen, the cover to Youngblood #9, or as I like to call it, "the weekend version of that Badrock cover with the blind laser sight lady".
This one is straight from Rob's high school art folder and I'm so tired of explaining what's wrong with him. He doesn't know how to draw multiple characters standing on the same plane. He doesn't know how to draw a woman standing. He doesn't know how to draw a woman sitting, either, unless she's supposed to be slipping off of Badrock's hand. He thinks the ribcage is the biggest part of a person's body. He thinks the thigh should be twice as long as the torso. He thinks we're cool with seeing what he sees when he closes his eyes to masturbate. "A lady ... TWO LADIES. And they're wearing bikinis! And their boobies are SO BIG, and they're CHOKING THE LADIES TO DEATH. And nobody has shoulders! AND A MONSTER IS THERE."
Also, pretty sure Bedrock has the inside of a bicycle wheel as his neck muscles. 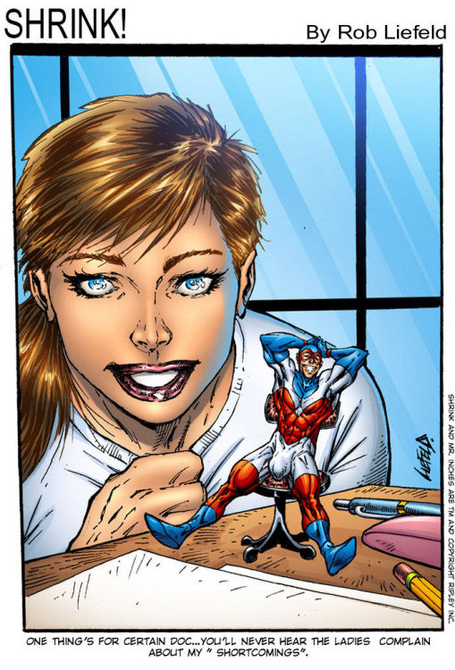 At some point, Rob Liefeld put out a series of "joke" "comics" called "Shrink!" that were his super, super, super sad and gross attempt at a single-panel comic strip. Shrink, get it? Because a psychiatrist, but also superheroes sometimes shrink? AWESOME COMICS

In this one, the titular psychiatrist gives you, the reader, a combination thousand-yard-stare and death grimace while the also-titular (I guess, who gives a shit) shrinking character brags about his sexual endowments in such a way as to make you feel grosser than you have ever felt while reading a comic strip.

At first, it seemed as though the character seemed to be bragging about one enormous, grotesque testicle. But then I took a (shudder) closer look, and, nope! Dickhole! THAT’S A DICKHOLE. VISIBLE THROUGH HIS SPANDEX. LOOKIN’ AT HIS DICKHOLE. 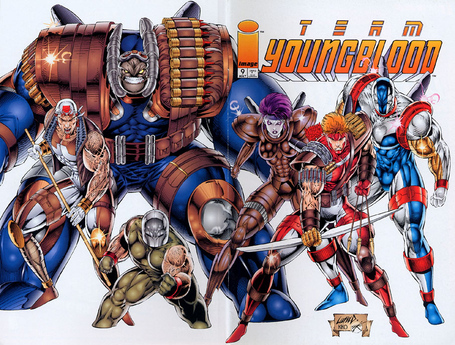 How does Rob Liefeld draw short people? By refusing to draw the bottom half of their legs. He also draws tall people this way. Look at Badrock's feet. LOOK AT THEM. He drew a leg and capped it off with a flat edge and a fucking semi-circle.
That's not the worst part of the picture. Look over on the right, if your retinas don't burn out from looking at so many lens flares. See Shaft? Diehard, Bedrock and Fake Domino are standing behind him. Diehard's leg is in front of Fake Dominos, so you'd think she was in the back, but HER leg is over Bedrock's. So unless the latest Youngblood mission is "three-legged race" there is no way to properly size these people up, especially when they're standing onnothing. Oh, and that's also not the worst part of the picture.
See the janitor looking guy on the left? His name is KNIGHT SABRE.
KNIGHT
SABRE