We all ate tacos. Here's all the tacos we ate.

Well, it's over. We did it. The Doritos Locos Taco Throwdown Oh-Thirteen is in the books. If you missed out on what this is all about, SHAME ON YOU. You can read the mission statement, build-up and rules here, but the point is that we went out into the world and ate a bunch of tacos. Doritos tacos. From Taco Bell. You know the ones. They're the ones that move the quality of your life from "regular" to "mas."

Luckily, we were not alone. We had the help of the Internet (mostly on Twitter), as dozens of friends from around the globe tried to cram their face-holes with as many succulent, sodium-packed DoLo tacos as would fit into their poor, poor bodies. Some people bested their marks from last year. Some people fell well short. Most people were competing in their very first #DoLoThroDo!

Some people missed out on DoLo, either by not hearing about it in time (somehow), by having other (more civilized) events on this day, by living in a city/county/state/country that does not offer Taco Bell, or simply by choosing to stand aside and tut-tut the participants on Twitter. To that latter group, I must ask: how's that wet blanket? Cold? Uncomfortable? Some people enjoy a good, damp blanket. It's the way your father went to sleep and his father before him. I'm not about to begrudge anyone their traditions or proclivities. I'll be over here under my cozy, dry blanket. The dry blanket is also coated in Doritos dust, but we're all just out here livin' our lives, people.

Anyway, on to the results!

We asked people to document and post their proceedings and final tallies. People were happy to oblige, be it on Twitter, Instagram, Vine, or other. One enterprising trio even contributed a live Google Hangout. This was splendid. Participation was off the charts and more than we could have hoped for.

For the complete rundown and most of the media available, we cannot recommend enough this Storify, which was meticulously assembled by our good friend Andrew Webber. Tremendous stuff and a must-read for anyone interested in the #DoLoThroDo mythos.

And thanks also to @Weird_Meat, who handily compiled a running chart of the leaders and their calories consumed throughout the day, which I now post here: 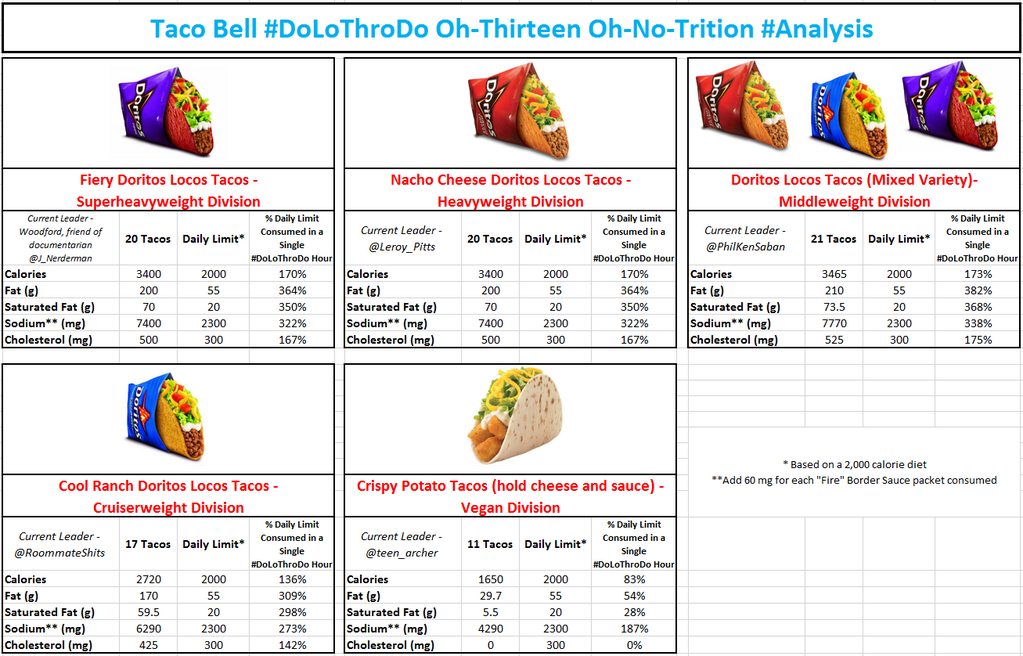 And here are the final winners:

SUPERHEAVYWEIGHT DIVISION (FIERY/FLAMAS TACOS): Woodford, whose consumption of 20 Fiery DoLos was documented by @J_Nerderman. This American hero wore an American flag, which almost certainly assisted in the victory.

MIDDLEWEIGHT DIVISION (A MIXTURE OF TYPES OF TACO): Last year's co-champion @PhilKenSaban, who ate the most tacos of ANYONE in an hour, with 21 Nacho Cheese and Cool Ranch DoLos.

CRUISERWEIGHT DIVISION (COOL RANCH TACOS): A dark horse snuck in just under the wire, as @RoommateShits (surely a prophetic handle) squeezed in 17 DoLos (besting the previous mark of 16) as the clock ran out on the day.

VEGAN DIVISION (FREESTYLE): Another friend of the program, @teen_archer, blazed his own dairy-and-meat-free trail, as he purchased 11 crispy potato soft tacos (no cheese, no sauce), and managed to eat a whopping 11 flour tortillas wrapped around nothin' but tater. (lol butt-tater)

As for how your intrepid hosts performed: not so great! I managed to beat last year's mark of 10 Nacho Cheese DoLos by taking down a cool dozen, while Pete Holby fell short of his previous co-champion mark of 17, finishing with 16 (and a half). But DoLo isn't about us anymore ... as if it ever really was. It's all about the tacos, man. The tacos.

If you require more information, including the effects of the aftermath, please listen to the latest episode of Scientific Podcast Goes Boink.

Our grand champion gets the final word, I think.

Well, it was fun. I'm gonna go take a nap now and then I think I'm gonna call some hospitals. #DoLoThroDo