The Most Watchable Movie Ever Bracket, Day Three: Comedies.

Share All sharing options for: The Most Watchable Movie Ever Bracket, Day Three: Comedies. 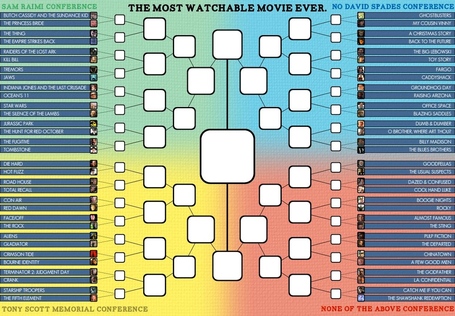 After a narrow brush with the worst fate imaginable when Joe Dirt was nominated, the comedy No David Spades Conference was refined to cut out any trace of David Spade's existence. Each film in this conference will be accompanied by a dude's misinterpretation of a costume from the film that you're wearing to a Halloween party. Voting for this conference will close at 5pm EST, September 22. Discuss your selections or David Spade avoidance tips in the comments section below. Comments have been disabled on the ballot pages in order to keep discussion confined to one place.

To quote a comedy film that will most likely enter the competition as a wildcard and win the whole thing, Larry the Cable Guy: Health Inspector, GIT 'R' DUUUUUUUUUUUUUUUUUUUUNNN