In case you somehow missed it, Saturday was the inaugural DORITOS LOCOS THROWDOWN OH-TWELVE, an evening set aside for people on the Internet to eat as many Doritos Locos Tacos from Taco Bell as they could in an hour. By any metric, the event was a rousing success. Particularly if the metric you're using is "total tacos consumed."

At the end of the evening, we had some people filled with regret and others filled with despair. Most of all, however, we were filled with tacos. Vaguely Doritos-flavored tacos. Increasingly soggy tacos. We crowned co-champions and we have tales to tell. Listen to them with us, won't you?

The ultimate winners of the event, with 17 tacos consumed each, were the Internet's @PegPelvisPete and our own P-Boi staffer Pete. Please take a moment to congratulate them in the comments or to perhaps follow them on Twitter. They would greatly appreciate either, I'm sure.

Some of the participants were able to consume 10 or 12 tacos, which is certainly commendable. Personally, I could only manage nine -- and even that number was mostly spurred on by my sitting so close to Pete as he powered through his Herculean task. After I powered through my ninth DoLo, I certainly had time enough to try for a tenth, but while I felt I definitely COULD eat that delightfully round number, it would not be without consequence. I am glad I refrained, for just a short time later I felt fine. And apart from a powerful thirst the following morning, I was none the worse for wear. In fact, I had the remaining three tacos from my Fiesta Party Pack the following day for an afternoon snack. They were eaten cold, out of the refrigerator, presenting no significant drop-off in quality, flavor or texture. This, I feel, is far from a compliment.

But enough! You are not here to be bludgeoned to sleep by the story of a rank loser. You are here to be awed by the epic story of a superhuman victor.

Without further ado, here is Pete's first-hand account of his tremendous accomplishment. Read on and let his words be a balm to your soul.

I think all people have impulses of which they are not proud, and in many ways I am very glad that all mine led me to do is consume as many Doritos Locos Tacos as possible. This was impulsive, nor did I have to make some measured decision about whether I should or should not participate. As soon as Bill announced it was taking place, I knew I would do it, and I knew I would try to win. Is winning the right word? Was this a contest? I really should have bothered to check that before I started. I can eat, both in the sense that I enjoy consuming substantial amounts of food and that I am capable of pushing past the point where my body says, "Hey pal, you're nourished. Good job!" Anyone who has ever really gorged knows what the territory past that point feels like. It's not fun; your body races to develop levels of discomfort that can keep pace with the shame your mind is putting out. (It's up to the task.)

I went into this having eaten exactly one Doritos Locos taco before. I had a vague sense of what I was in for, and I spent most of Saturday trying to stop thinking about how this probably wasn't going to be tremendously challenging. As it turns out, I was taking after a mouse with the vanity of foresight. Eating a whole bunch of Doritos Locos Tacos is miserable! The first few genuinely were a breeze, but around No. 5 or so, I knew I was in for a slog. That's the point at which they stop tasting like Doritos, an effect I found quite curious. The distinctive tang disappears completely and you're left with one mouthful of salt after another. I had 18 tacos worth of salt (literally this much) something the fine people at Taco Bell were sure to note: 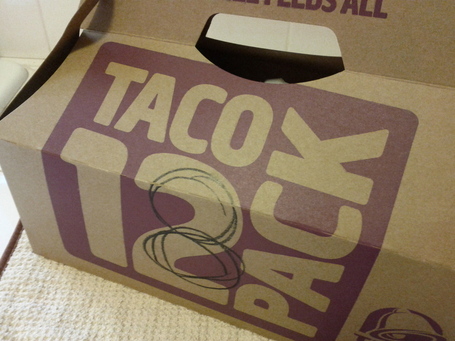 By taco No. 9, I had set upon the goal of a dozen. Bill had announced that internet user PegPelvisPete had managed seven, and that was the highest so far. Three more and I'm OK, I thought. This wasn't so tough after all! Hubris, thy orange-coated fingers have gotten all over thy best jorts. Bill went on to announce that seven was a "so far," and PegPelvisPete had updated with his total: 17. I retrieved the remaining tacos (I had been keeping them warm in the oven) and set to work. I got to 13 with 15 minutes left in the hour, and after 14 I knew I was done. "Is this being an adult?" I wondered. Having the sense to stop at a point past sensibility but before injury? I considered this as the clock ticked down on my remaining time, and I considered it further as I went back to the remaining tacos and kept eating. Slowly, carefully, and with no small number of "HEY PAL CUT IT OUT" signals from my body. With two minutes left I had had well and truly enough: 17. I respected the other Pete's effort, and I was happy to match.
The ensuing hours passed with no more discomfort than I had found in similar failures of restraint in barbecue joints and delicatessens. All in all, a small price to pay for an evening of fun on Twitter, and at long last, the "Accomplishments" section of my résumé is no longer blank.
-------
Thank you for joining us on this spectacular journey, everyone. Should you have your own #DoLoThroDo12 story to tell, please let us know about it in the comments. And join us next year for OLIVE GARDEN NEVER-ENDING PASTA BOWL THROWDOWN OH-THIRTEEN.