Share All sharing options for: The 40 Worst Rob Liefeld Drawings, Part 4 Of 4 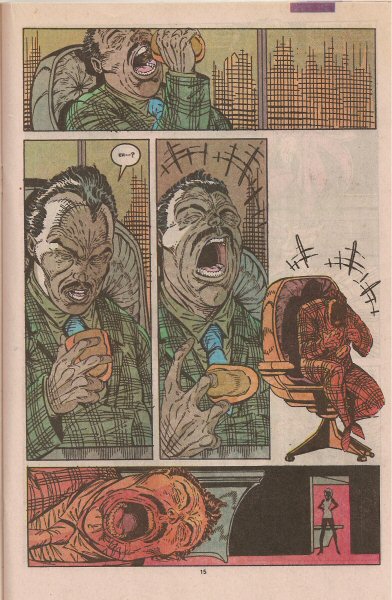 In a room comprised of screen doors, a man decides to close his eyes and drink nothing out of half of a metallic medicine capsule. Realizing something is amiss, he has a heart attack! This turns him orange and whites out his surroundings, and just before his Nubian secretary can enter the room he collapses, eyes still closed, and dies, all alone and orange on the magenta void that used to be his floor.

(sorry about your Dad, Berto, I liked you back when Bert Blevins was drawing you)

Okay by this point we all know about Rob’s little foot problem. Look back at that other picture of the blonde in the dress with her cooch showing. Notice anything? Besides her vag you moron.

Apparently Rob never learned how to draw a woman standing flatfooted, so rather than, you know, LEARN he instead drew every female character en pointe. Or had them jumping. Or crouching. Or running. Or standing with their legs behind something. Or standing in water. Or falling. Or flying.

These women look very uncomfortable. Domino especially, just all one giant leg tapering down to a finger-foot, trying to dislocate her ribcage. 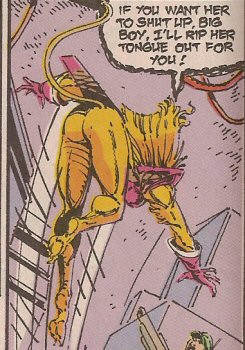 I'm not an expert on anthropomorphism and I'm the last person to consult when it comes to sexualizing an animal lady, but is the tail supposed to come out of the middle of the butt cheek like that?

And while we're at it, hey Rob, speed lines are supposed to suggest motion, so you only have to draw them going in the direction of whatever you want to look like it's moving. You don't need to draw perpendicular lines across them. Your characters aren't shitting out ladders when they jump. 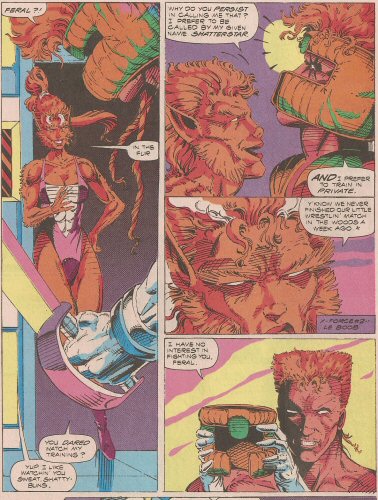 This page could've made the list based on Feral's right leg disappearance somewhere in the middle of the sword handle in the first panel, but no, this was selected by Bill Hanstock based on the magically changing hairstyles. When you create a character and you give him a bunch of ponytails, you have nobody but yourself to blame when you have to draw them on.

In the first panel, Shatterstar's hair is long and flowing, with two ponytails coming out of the same spot on the right side of his head. In the second panel his hair has gotten shorter and the ponytails are nowhere to be found. In the fourth panel, when he takes off his hilarious padded helmet, the hair has shortened further into a Colonel Guile flat top with a rat tail. So I guess Shatterstar's hair reacts like a flaccid penis and shrinks when he's faced with unwanted sexual advances. I can't explain where his pupils or eye makeup went, though.

In the first panel, Feral has a big ponytail (that is floating underwater or something, because ponytails don't work like that) with white bangs. In the second panel the ponytail is offscreen so who knows what's going on there, but the white bangs have disappeared completely. In the third panel, she's not wearing a ponytail at all and has the haircut she has normally, with white streaks returned, but her bangs are still orange.

So he only had to draw two characters on this page and fucked them up consistently, even though he had the other drawings he just did to work from. Ehhhhh, we calls it hereditary blindness. 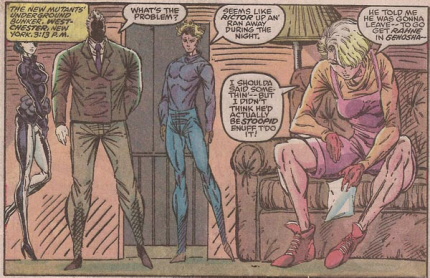 No one in Rob Liefeld’s world ever just stands like a normal fucking human being. They’ve always got their chests and asses sticking out at odd angles, or standing on the balls of their feet, poised to strike, or one guy inexplicably with his face in complete shadow although it’s literally the only shadow in the entire room and it’s just in one completely localized area just right there.

Whoever painted that wall fucked up so badly. Matt Murdoch should stick to lawyerin.

Oh man, this has EVERYTHING and then some. You’ve got the terrible feet AND feet being blocked, the terrible grasp of anatomy (check out David Bowie there with the ridiculous elongated neck all offset onto one of her shoulders, arms different lengths, like nine feet tall, and the coup de grace, both legs forming one ridiculous slender leg. Look at the knees! THAT IS ONLY ONE LEG).

This is a tremendous example of Liefeld’s knack of drawing people interacting with things but not actually drawn as such. You’ve got Cable sitting on some kind of hover…bike? And his foot isn’t touching it at all, and his hand is just kinda noncommittally NEAR any supposed controls. I swear Liefeld probably drew Cable standing on the dock, crouched and ready, then looked down and said “Whoops! Heh, got a little more page down at the bottom there!” /scribble scribble 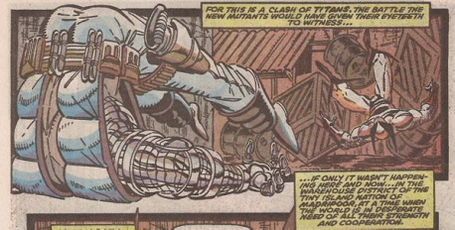 I held this picture up to my roommate out of context and said “I want to see how long it takes you to figure out what is happening in this panel.” He stared at it for about 45 seconds, brow furrowed, before timidly offering, “Breakdancing contest?”

The correct answer is that it doesn’t really matter because dear GOD just look at how terrible all of this is. 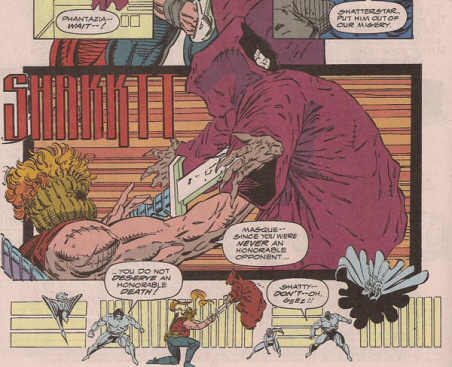 This page actually used to make me furious when I was thirteen, because there is no fucking way Shatterstar is pushing that sword into that guy with his PALM. Also the wrong person is finishing his line in the last panel.

These two frames say all that needs to be said about Rob Liefeld: He is a terrible artist with no concept whatsoever f basic human anatomy, physics, or how things operate. There are a myriad of comic book artists who painstakingly research anatomy and medical photographs and watch cinematic masterpieces to try and emulate the great auteur principle of mise-en-scene. They have friends and models pose and they set up the appropriate lighting and take pictures for reference. They look at metallic objects to get the sense of reflection just so. Rob Liefeld, on the other hand, thinks you can put the flat of your hand against the bottom of a sword’s handle and push it through a guy, lifting him off the ground.

Look how smushed everyone looks in that panel at the bottom. That’s not a stylistic choice or anything, they just wouldn’t fit otherwise. That’s the only reason Shatterstar is on bended knee offering everyone a Jawa kebab. 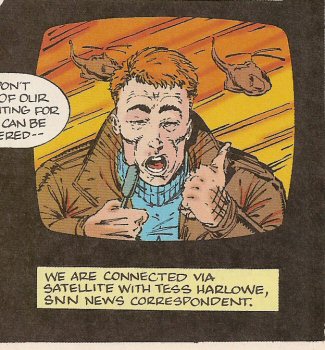 we are connected via satellite with an eyeless, 14-fingered disabled man who chose to wear a turtleneck and a trenchcoat with the collar popped to his report in the desert

tess, what have the iraqis been doing to your thumb, jesus christ

i'm sorry we can't hear you, try talking directly into your hot dog on a stick 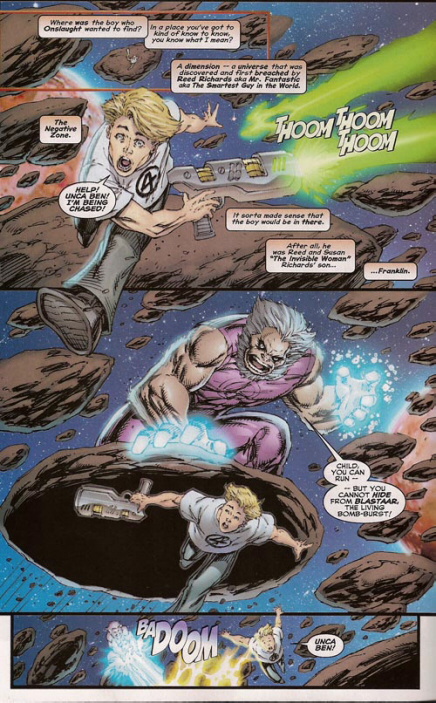 This is by no means the worst art that Rob Liefeld has ever subjected the world to, but it is the most blatant example of how little a fuck he gives about every aspect of his “craft”, the industry, and above all, the reader. We’ll ignore the elephantine Strong Sad leg that he’s given Franklin Richards in the first panel, and the billowy 90s wide-neck T and feathered ‘do, despite this comic actually having come out THIS YEAR. Look at Franklin’s hands in the first and second panels. I have made a lot of jokes about this sort of thing up to this point, but I think this is finally concrete evidence.

Rob Liefeld drew this ENTIRE page of a comic book before realizing that Franklin was supposed to be holding a gun. Then, instead of using Photoshop or altering his existing art, he DREW IN a gun behind his hand on the first and second panels, then called it a day. LOOK AT THE HANDS. THERE IS NO WAY HE EVER INTENDED FRANKLIN RICHARDS TO HAVE A GUN.

Rob Liefeld is still getting commissioned to do work for both major comics publishers. He is one of the most successful, recognizable, well-known and popular comic book artists in history despite being difficult to work with, egotistical, contrary and missing deadlines on a consistent basis. He has made more money than most of us will ever see in our lifetimes. He still cannot draw a foot.

Good news, y'all! Rob Liefeld has drawn so many shitty drawings that in June 2012, we did ANOTHER all-new list for him! Check it out here!