Share All sharing options for: The 40 Worst Rob Liefeld Drawings, Part 2 Of 4 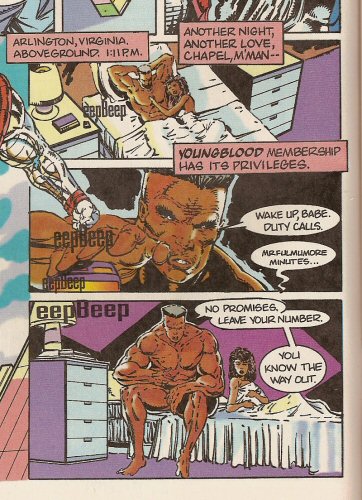 Imagine me at age 12 getting to read a comic about how the big black naked bodybuilder uses the girls he dates. Now imagine me at 27 going over it again, laughing at how skeevy it is, and then noticing an absolute cavalcade of illogical nonsense horseshit about it. Nothing in these panels makes sense. I get what he's going for, he sits down at his drawing desk with his button-fly jeans and his backwards baseball cap, rubbing his chin and pondering what the new, hip comic book collector would like to read. So he spends at least a minute and a half drawing these pictures about a tough guy who wakes up, gets called in to work, and tells the woman he's had the have sex with that he's like dust in the wind. Liefeld smiles, pats himself on the back for a job well done, and slams a Dew.

Now, what is wrong with this, you may ask

It's 1:11 PM. That's the early afternoon. Chapel congratulates himself for "another night, another love." He uses the colloquial phrase "M'MAN" to show that sex with broads is no big d. So even though it's just past noon and he's "ABOVEGROUND," he's saying it's nighttime and his room is completely dark with a bunch of nighttime shadows on the wall.

The Youngblood communicator thing goes "eepBeep," a sound no-one has heard or capitalized in that fashion anywhere ever, and he tells her to wake up (at 1:11 PM, again, above ground, where the sun should be). She asks him for five more minutes of sleep, and he responds with NO PROMISES YOU KNOW THE WAY OUT. If she had said "ooh baby i'll be here when you get back" or "when can i see you again" it would've set her up as in awe of Chapel's manhood (which is what Rob's going for, I think), and the response would've shown Chapel as a hard womanizer who values his life as a soldier more than any woman he might take to bed. But she asks him for five minutes of sleep, so when he responds like that it makes him deaf, or some weird taskmaster of the alarm clock.

I don't think he's sleeping, though, because he's got his arms behind his head like he just finished up or is in a hammock, and depending on how long they've been there she's been sleeping with her face in his giant hairless armpit.

To recap, it's daytime but everybody acts like it's night, Chapel quips without being set up for it, and even though Chapel sleeps on a mattress on the floor his bedspread still gets a full hang. And in the second panel Chapel is coated in a fine mist. 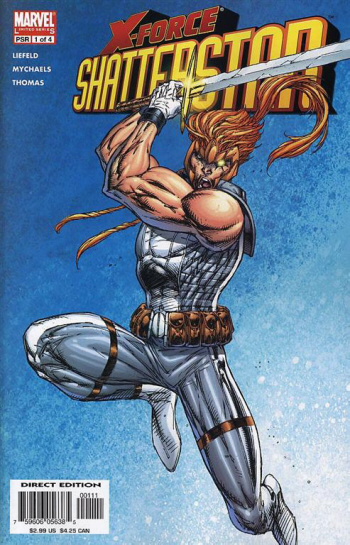 "You know what? I’m not drawing that other hand. Too tricky. Pfft what are you talking about? No one’s going to notice."

Look out, bitch-fight in front of the furnace!

Prophet, a time-displaced hero who needs an asshole of adamantium to carry that many pouches around his thigh, drops a big leg on Combat, an alien with powers that include making me too apathetic to even finish this sentence with a joke. Well, Bill Hanstock thought he was dropping a big leg on Combat. In my humble opinion, Prophet is going for a Bronco Buster and Combat is countering with the foot to the dick. Whatever is happening, it shouldn't be happening long enough for Combat to get out two whole sentences, have Prophet respond, and then go OOOF as though the action has been completed.

Yep, that's how comic books work. Maybe he's saying OOOF because he got his wingtip stuck in the furnace. 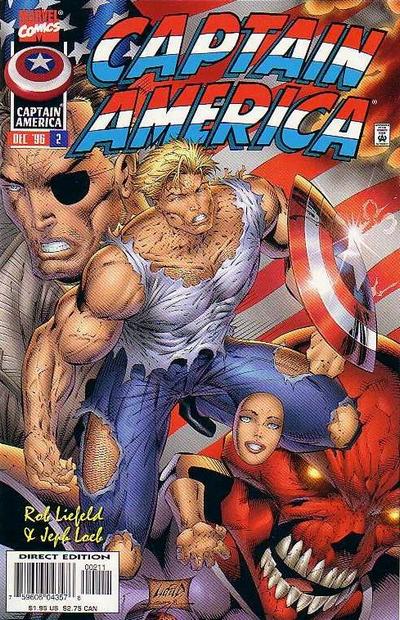 ALL GRIMACING ALL THE TIME

To be fair, you would grimace too if your neck was doing that. I honestly had no fucking god damn idea why that face and hand are there. How do you get perfectly symmetrical tears on your pants like that? Haha, ruined T-shirt, shredded Dockers jeans, perfect tiny little dress shoes. The shield is all fucked-up and Liefeld never learned to draw anything other than early-90s feathered, blow-dried hair that doesn’t touch the ears. I think the only sideburns he’s ever drawn were on women. I think he just draws the face and then draws a big floppy squiggle on top with an arrow pointing to it that says "(hair)" and then the inker sighs and takes a pull of Southern Comfort and does his job as best he can.

I thought I would be above making a comment about how it looks like the Invisible Woman is taking a shit, but there it is. I’m pretty terrified by this drawing, honestly. This looks like it should be in an issue of Heavy Metal with VERY DIFFERENT THINGS happening to cause that expression. Liefeld’s approach to drawing women? Fat lips and plenty of eyeliner.

Look at where her upper arm is going off-panel and where "her" "fist" re-enters the frame. Also, any time he draws anyone running ANYWHERE, they always have their arms held straight out to their sides. Like, I understand that you have to create the illusion of movement but I think what is more important is the illusion of me not hating you.

First of all, Cable’s hips and thighs are comically wider than his upper body. Secondly, he obviously drew that gun in after he drew the whole rest of Cable. Cable’s fist is sort of nebulously hovering outside of the area where I guess the hand would GO if that were an actual gun, but he isn’t actually holding it. It’s just kind of tucked under his arm as though he were taking a gigantic newspaper to the john. And where’s his other hand for Christ’s sake?

I think everyone needs to realize that Rob Liefeld was THE MOST POPULAR COMIC BOOK ARTIST IN THE WORLD at the time. His comics sold millions of copies. He starred in a Levi’s commercial that was ABOUT HIM. AND THIS IS WHAT HIS ART LOOKED LIKE. HE MADE MILLIONS AND MILLIONS OF DOLLARS FROM THIS YOU GUYS

Well at least he traced out exactly where the borders of her vagina are, in case anyone was wondering. Wait, someone put one of her legs on sideways. Oh well, heh, I’d hit it. 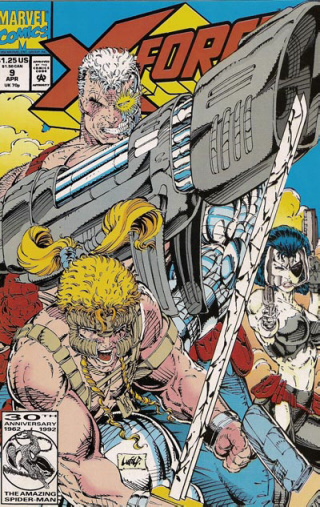 "I think Cable should be holding a BIG gun on this cover."

Well yeah he usually is.

/draws an artistic representation of excess 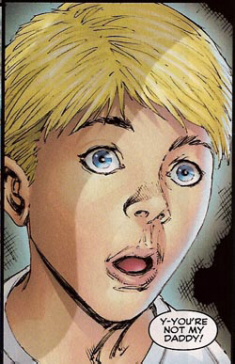 I have never seen a drawing of lips make me feel as creepy as looking at this does.

Welcome to the 90s! Guns, swords, and long hair. Is it any wonder that it took so long for comic books to be a socially-acceptable artistic medium? If Jack Kirby is the Thomas Edison of comics, Rob Liefeld is the Al Jolson. Except I think Al Jolson could draw pretty well.

I really cannot get over how enormous Rob tends to draw his male characters. Really, they’re so over muscled and a stereotype of a stereotype that they just end up looking like weird wrinkly fatasses. All the pouches and half-shirts ain’t helpin either.

If I had a nickel for every time Liefeld had his characters standing behind something so he didn’t have to draw their feet, I would still not have nearly as much money as Rob Liefeld.