Share All sharing options for: The 40 Worst Rob Liefeld Drawings, Part 3 Of 4 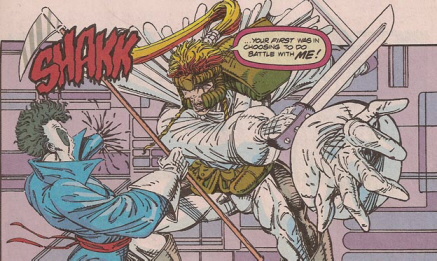 Here’s a game to play: which one of those fingers is a thumb? Give up? So did Rob Liefeld!

The guy with the swords, as touched on before, is another of Rob’s creations, Shatterstar. His power is that he has swords and boxing headgear, and also that he has a star around one eye because Paul Stanley is totally a badass you guys.

Anyway, Shatterstar has all these swords all the time, and Rob Liefeld cannot grasp the basic concept of how the blade of a sword sits on the hilt. Or hey, maybe he just doesn’t give a shit. Here you see the blade kind of resting diagonally or almost perpendicular to the hilt, probably because he used a ruler to draw the blade and then was like "Hey I used a tool to make sure that line was straight, now kiss my ass, PHYSICS."

In addition, either Reaper is tiny and Shatterstar is crouching down in to chop his hand off, or else he is jumping for no reason in such a way as to not gain any leverage or anything, just to be awkward. 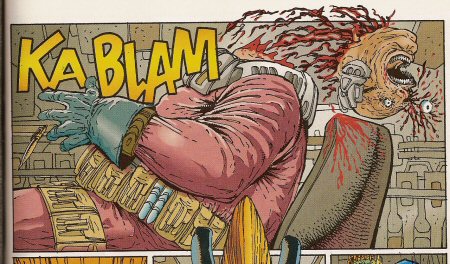 "Darker Image" was intended to be a 4-issue miniseries from Image used to introduce three "grim and gritty" characters. In the first issue of Youngblood a guy uses psychic powers to explode Saddam Hussein's head, but that is for babies. Featured in the comic were The Maxx (who ruled), DEATHBLOW*, and Bloodwulf.

Okay, DC Comics has a character named "Lobo" (which means "wolf"), an intergalactic bounty hunter who was popularized as a parody of the ultraviolent antiheroes becoming popular in comics in the late 80s. Bloodwulf, who has "wolf" in his name, is intended as exactly the same as Lobo. If you wanted to say he was a parody of Lobo you could do that, with Bloodwulf serving as a parody of a parody of ultraviolence by doing ultraviolence without irony instead of with it and get all meta, but, well, he's just Lobo again. He shows up for no reason to infiltrate a base and kill the guy in charge of it (this is the plot of everything Rob Liefeld has been asked to write himself - the first 8 issues of Youngblood open with them jumping from an airplane onto somebody's base). On the way in, he walks by LOBO.

It's like when your friend decides he wants to write X-Files fan fiction, but instead of writing his own episodes of the X-Files they're all stories about Mulder and Scully hanging out with their new friend YOUR FRIEND. There is absolutely zero humor or creativity going into it, Liefeld just drew a goddamned Lobo comic, and because he goes LOOK GUYS IT'S LOBO I'M SELF AWARE it's supposed to excuse the fact that he's a lickshit with the artistic ability of 2 girls with 1 cup. In the big finale, Bloodwulf shoots the boss in the head one time (ka-blam) and manages enough force to sever the head completely from the body and still be accurate enough to pop out the guy's eyeball. Thank goodness Bloodwulf shot him in the neck hard enough to break the spine off a foot below impact and spill the body's supply of stringy goop. And look, even the fat guy is covered in pouches.

The 4-issue miniseries ran for 1 issue. 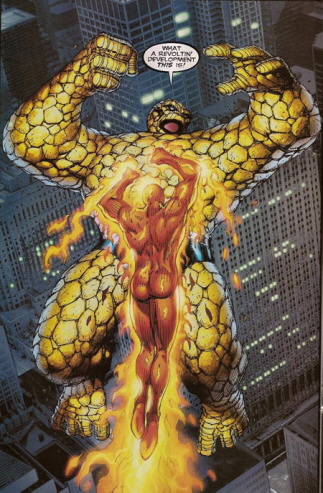 Now for a tasteful splash page of the Human Torch fucking The Thing missionary-style! Splash page? More like SLASH page, am I right!

Note the Torch’s full, supple buttocks. If this isn’t a drawing of a naked guy on fire anally violating a semi-nude grotesquery in midair I don’t know comic books! The Thing’s blow-up-doll mouth is also kind of disturbing, as is the fact that he kinda looks like he’s pretty into it. Never would have figured Ben Grimm to be a bottom, but there you have it.

At least they’re face-to-face, so you know this ain’t just some cheap fuck; there’s some passion involved at least. Work those nipples, Johnny! Work them good! 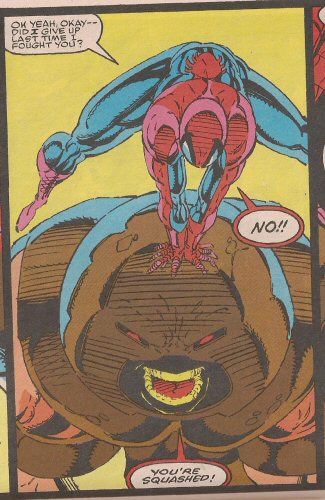 Rob Liefeld likes to draw lines all over his characters. So when he gets a chance to draw Spider-Man, a super hero with lines all over his costume, what does he do? He adds metallic reflections to his head and shoulders (the same reflections as Juggernaut's helmet, so mystic metal and cloth reflect light in the same way), cross-hatches his boots, and colors his belt a different color so he doesn't have to draw on it. 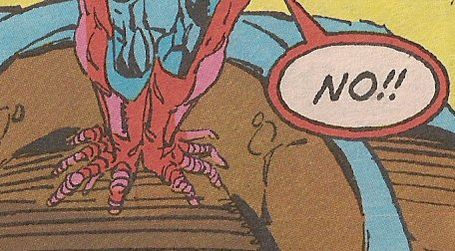 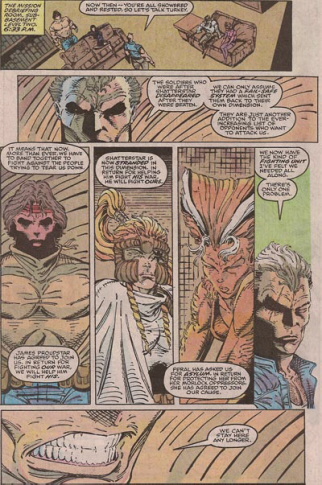 How many teeth are in a mouth? Like a billion, right? I’ll just draw a billion, all the same size and shape.

All of the characters on this page are in the same room. Not that you’d know that, given the way Liefeld draws the majority of his backgrounds. Where most artists would include, say, details of the room or an actual background, Rob uses groundbreaking techniques like, DAGWOOD’S HAIR! HORIZONTAL LINES! CURVES! And CROSSHATCHING!

Seriously, if that establishing shot weren’t there you’d think these people were all just kind of abstract concepts. What are they, in a wind tunnel? Who gives a shit, get back to people holding swords. 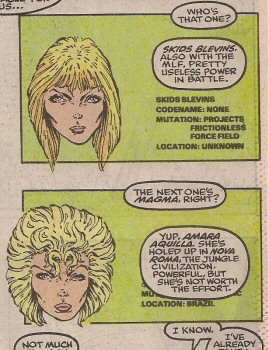 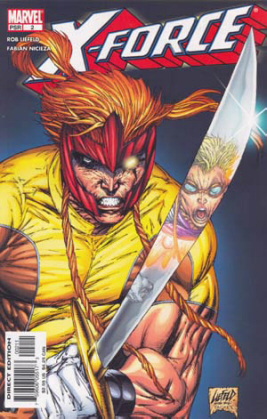 And again, I use "holding" in the loosest sense of the word, because Rob Liefeld does not understand how a human hand grasps something. Take this cover, for example. Shatterstar’s fist is at a minimum the same size as his head, and it’s somehow supposed to be holding that sword, which I guess Cannonball is flying at sideways or something?

God, look at HOW HARD Shatterstar is flexing. Maybe his superpower is that you can see all of his muscle and sinew through his skin. Oh mercy, I just realized that the guy has a semi-short haircut everywhere, but has a real long ponytail, and then ALSO has two long braids coming out of like the back of his neck somewhere. Can you imagine how hard you would elbow your friend if you saw a dude with three ponytails? You would elbow the shit out of them. 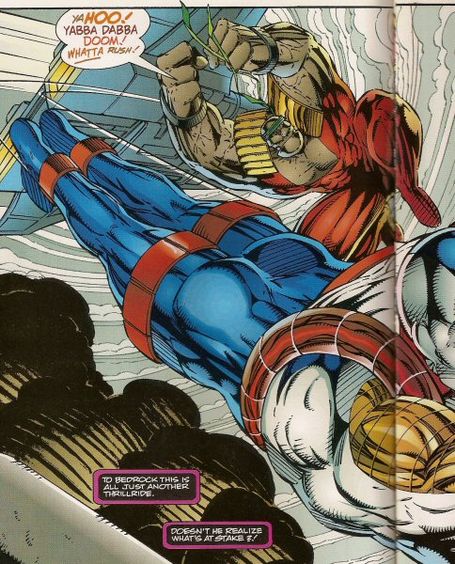 In this issue of Youngblood, the team jumps out of a helicopter to infiltrate an oh son of a bitch just quit it

The art in this splash page (every page) is notably bad for the big weird choice of having hard buttocks as its feature, but is included on this list as a catch-all for the best part about Youngblood: Rob Liefeld's writing. If you needed to find something worse than his ability to draw, it's his ability to write. And thank goodness he was paid millions of dollars to both draw and write!

It's a double whammy, here. Bedrock shouts not one, not two, but THREE catchphrases in one word bubble. One of them is YABBA-DABBA DOOM, which should have an entire wing of the Smithsonian devoted to its awfulness. But the best is Diehard's reaction. Doesn't he realize what's at stake?! Doesn't he realize what happens when you pair an exclamation point with a question mark?! You get to yell questions!? YaHOO! Whatta rush! 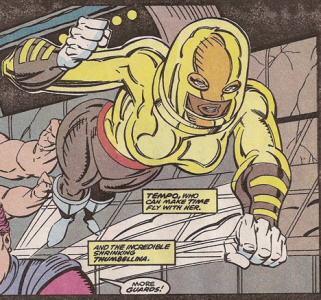 So, is she flying? Jumping? Falling? According to movement lines, only her right calf and left forearm are moving. And NOT EVEN IN THE SAME ARC. Her hips and upper body don’t line up, and judging by her eyes she’s clearly drunk.

And I know that Liefeld (sadly) isn’t to blame for this, but what the fuck kind of introduction to someone and their power is "Tempo, who can make time fly with her." So like, she flies, I guess? And something to do with controlling time? Ah the hell with it, we’ll make it up as we go. 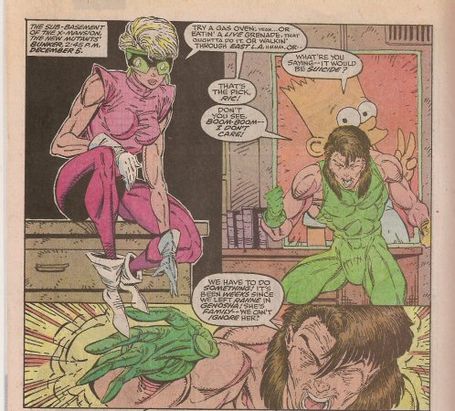 I've never though to question Rob Liefeld's sexuality, what with all the anatomically incorrect women and all, but I have to question whatever it is that keeps him from drawing a man's area without making it look he's got a fucking snow shovel shoved down the front of his pants. Look at Rictor's enormous area, it's almost as wide as his waist. As I write more of these it gets harder for me to write anything but LOOK AT THAT and WHAT IS GOING ON WITH THE GLOVES, WHY DOES EVERYONE ON THE TEAM WEAR SHORT SLEEVES AND GLOVES.

But I invite you to check out that Bart Simpson poster in the background. Not only is it TOPICAL~ but it's a blatant exercise in dissecting Rob Liefeld's shortcomings. He doesn't have the patience for uniformity or technique, so Bart's hair spikes are all different sizes. He doesn't have the natural talent to draw a curve without having it end in a rippling lat, so Bart's fingers look like butterknives. He doesn't have the perspective to recognize how sizes and shapes relate to each other, so Bart has an Alfred E. Newman ear growing into his cheek. Rob, couldn't you have just traced a picture of Bart Simpson into the background? We all know you don't have any qualms about tracing.

Wait, why is Boom Boom sitting on a dresser? Is that where Rictor keeps his eyes?