The Montreal Expos: The mouse that never roared

Ten years ago today, the Montreal Expos played their last ever Major League Baseball game. From the Progressive Boink Classic archive, here's Nick's post from 2004 saying farewell to the mouse that never roared.

Share All sharing options for: The Montreal Expos: The mouse that never roared

May 27th, 1968. Montreal and San Diego are announced to be the two newest cities prided with an MLB baseball team to call their own. The following year in February, the Expos began spring training. The first game the Expos ever played was in Shea Stadium against the New York Mets, who they defeated 11-10. Their first game in Montreal was against the Cardinals, who they also defeated 8-7. Two weeks into the season they recorded the franchise's first no hitter, under the wing of Bill Stoneman, against the Phillies. The Expos were not wasting any time.

It was a baseball town where raising talent was a priority, especially given the fragile budget that it was facing. The Montreal Expos raised 5 Cy Young award winners in their 36 season history, only one earning the title in Montreal , Pedro Martinez. The inability to hold on to these potential leaders came from poor funding and careless administration. The only pitcher ever to record twenty wins within a single season for Montreal was Ross Grimsley.

In 1979 the Expos came closer to the division title than they ever had, coming in second and bringing the pennant race into the final series of their season. In 1980 they would lose the division race again, this time by one game, which was lost on the final day of the season. In 1981 there was a strike, and the Expos lost in game 5 of the NLCS to the Dodgers, who would go on to win the World Series.

That brings us to 1994. This was the year that makes even me, a red sox fan, who has not won a championship in 86 years and has been closer than any other team in that time without actually accomplishing the fact, feel lucky to have not been from the city of Montreal . It started in June when the Braves came to town, surrendering a three-game series to the Expos, and in the process, first place in the NL East. The Expos would stay in first place for the rest of the season, ending the regular season with the best record in baseball, 74-40. A normal baseball season is supposed to consist of 162 games, you say? Not 114? Well that's because the players went on strike, ending what would have most definitely been the finest season in Montreal Expos baseball. The 34 game difference from wins to losses is the greatest deficit at the end of any MLB season.

It was just a sad day in baseball. 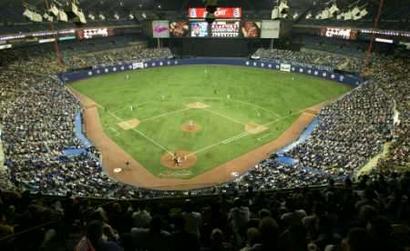 Another sad day struck Montreal on September 29th , 2004, when the Expos played their last game at Olympic Stadium. The MLB had just announced that the Expos would be moving to D.C. the following season. They also announced that they had never heard of Bill Lee or knew that a spaceman had played within the MLB. They just don't know what the fuck they're talking about.

You say, "Nick, there were absolutely no fans in Montreal and the yearly revenue was probably in the red, they needed to move the team in order to help it develop and mature into a decent ball club."

First off, there were fans, just not enough to make enough money for everyone to be happy. The fans of the Montreal Expos have to be the most dedicated fans I've ever encountered. I tip my cap to them. 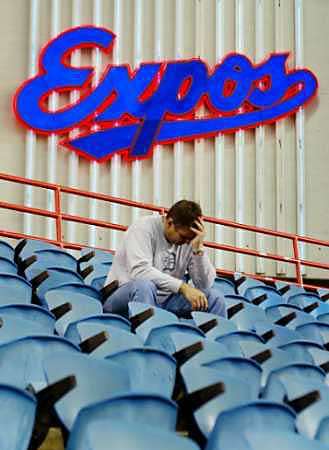 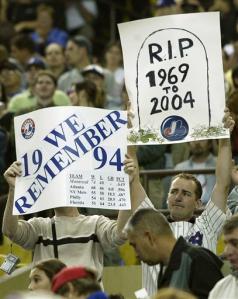 I can't even imagine.

Secondly, I'll show you a decent ball club. Prior to trading away Orlando Cabrera the Montreal Expos had the highest fielding percentage in baseball. That is a constant that with proper pitching and timely hitting leads to successful seasons. Getting pitching is hard for a low-budget ballclub to manage, and the bats just weren't there...ever. Nonetheless, a basic foundation of defense had been established, and with a decent GM a good team's going to be made, but they just got fucked over by money-craving assholes. These type of people ruin everything I like.

Take this moment to tell your current GM that you love them. Let them know they're appreciated.

Back to this being a sad day in baseball; I'll admit that I didn't watch the game as it happened, I was busy chewing out the good people at MLBTV for blacking out my Red Sox game. I did spend the day afterwards reading about 5 articles on the team and a subsequent article explaining to me why D.C. is the future of baseball. After reading these I turned to MLBTV, and watched the replay of the game. The Marlins won 9-1 and Jeff Conine was named the player of the game. The game was played as any other game would have been, given the odd amount of fans present within Olympic Stadium.

Words fail in the 9th inning. Rudy Seanez will be the last pitcher ever to take the mound, retiring the Expos 1-2-3 to complete the sweep. That's not what matters, though. What matters is that with two outs in the bottom of the ninth inning at the last game you will ever see played at this ballpark you feel like you're watching an execution. You're watching the boy that no one tried to help be put to death, and the whole town shows up to see him die, and they all know it's not his fault. Terrmel Sledge was the last batter to step into the batter's box in Montreal's Olympic Stadium, and the electricity that flowed through all those fans in attendance and every baseball fan who understands the importance of tradition and knows why Ichiro is going to have an asterisk next to his name was indescribable. I sat in front of my laptop, watching the replay of this game, and felt as though I was going to cry. I am whole-heartily convinced that this game was perhaps one of the saddest sites I had ever seen, excluding personal matters. The fans rose to their feet, gave a rousing round of applause, and cried. They clapped slowly, pausing occasionally to wipe the tears from their cheeks and the cheeks of their loved ones. They held up signs that had inspirational words for the team that they loved, a team that was being taken away from them.

Sledge hit a lazy pop-up to third baseman Mike Mordecai. It was while the ball was in the air that everyone realized the significance of the game. Sure, that day at work they told everyone how they were going to the game, you know, to be part of the history, and how much fun it would be. It's sort of like that time in your life when you're putting on your best suit or dress for a loved one's funeral. Then you show up, and you see the body. You see that pop-fly reach it's apex and begin it's decent into Mordecai's glove. You want to jump to the casket and shake the person, coerce them to wake up, stop sleeping and wake up. You want to run onto the field and tackle Mordecai, keep the game going on forever. It's man's inability to deal with the mortality of everything that sparks this side of human nature. You want to call God an asshole, how could he end this person's life in such an unfair manner. You want to call Mordecai an asshole, if he had any sympathy he would drop the ball and tip his cap to the crowd. But then you see that body, see that third baseman settle underneath the ball, and slowly raise his glove. You accept it. You stop clapping. You stop crying. You just watch, braindead and numb. 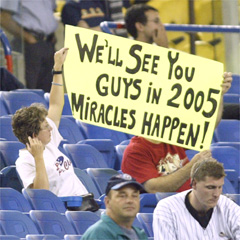 Mike Mordecai caught the ball and trotted to his respective dugout. The ball was tossed across the diamond to the Expos dugout, to Field Manager Frank Robinson. Paparazzi covered the field barraging the players and coaches with microphones. They were the last people in the world these guys wanted to see, they just wanted to thank their fans and savor the fleeting moments they had left in their home. 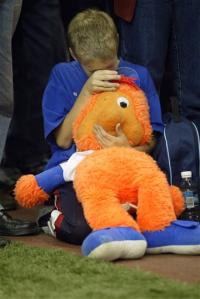 The fans stayed, and they cried again. They clapped louder now, and the players tipped their caps, most of them now crying, too. Money ruined this sport, and this is a true example.

This is a salute to the 1994 "Best Team in Baseball". Remember your home.