The third annual and largest Doritos Locos Taco Throwdown is at an end. Let's find out whether any records were set and how much sodium was consumed.

Once again, we journeyed to the mountain. The road was arduous, the going difficult, but somehow we persevered. And we reached the top. Together, leaning on the strength of one another, we managed to ascend to the apex, the air biting and thin, the view majestic. We surveyed the land below us, stretching out toward the horizon. It was beautiful. We all shared this one, beautiful, perfect moment together, savoring the elation of accomplishing something that few are ever willing to attempt.

Then we had to lie down for a little while, because our backs hurt. From eating too many tacos.

Yes, the DORITOS LOCOS TACO THROWDOWN OH-FOURTEEN was a rousing success by any metric. By far -- by FAR -- the most people who have ever participated, stretching far and wide throughout both the United States and Canada. We are proud of each and every one of you. Even if you only had one DoLo in solidarity, that's what it's all about: it's a day for all of us to have kinship with one another; to experience what it's like to eat a ridiculous foodstuff for the sake of community. We built a village. And got orange dust all over ourselves.

But some of you aspired for more.

Here, then, are the winners of the #DoLoThroDo14:

SUPERHEAVYWEIGHT DIVISION (FIERY/FLAMAS TACOS): Ricardo Marquez (@iBlogBetter) took home the belt and set a new record in the Fiery division by consuming 22 FIERY DOLOS. This is much more impressive than you even know. He was determined, he had the heart of a champion, and it paid off. He is, reportedly, still alive.

HEAVYWEIGHT DIVISION (NACHO CHEESE TACOS): Shockingly, the division that started it all took a significant tumble from last year's all-time record of 20. There was a two-way tie between Steve Mallinson (@stevemall95) and Marc Normandin (@Marc_Normandin) this year, with 13 Nacho Cheese apiece! (Both founders of the #DoLoThroDo, Pete Holby and Bill Hanstock, ended with 12 each. If only we'd known!)

MIDDLEWEIGHT DIVISION (A MIXTURE OF TYPES OF TACO): And here is where a legend was made. LSU fan Sal (@GEAUX_SAL), riding high on elation from his team's blowout victory on Saturday (I believe they played the Washington Generals), decided to become a hero. He downed 10 Fiery, 10 Nacho Cheese and five Cool Ranch en route to an all-time overall record of 25 DoLos. Unheard of. Unbelievable. The previous record for most DoLos in an hour was 21, set by two-time champion @PhilKenSaban in 2013. Sal, we are unworthy of your majesty.

CRUISERWEIGHT DIVISION (COOL RANCH TACOS): Once again, a division took a tumble. Stefanie (@stefanielaine) was our champion this year, managing a mightily impressive 14 Cool Ranch, but fell short of the all-time record of 17 in the division, set last year.

VEGAN DIVISION (FREESTYLE): Pioneered last year, this division of potato tacos, no cheese, no sauce, saw a NEW RECORD in what is, unbelievably, the healthiest category (by far). Michael Bendlin (@lamegigcontest) crammed in 15 of these potato soft tacos! Well done to Michael! That's a new record in an under-the-radar category!

Once again, our official #DoLoThroDo dietician Ryan Thibs compiled all of the nutritional information for the winners of each division. Some of you may want to turn away: 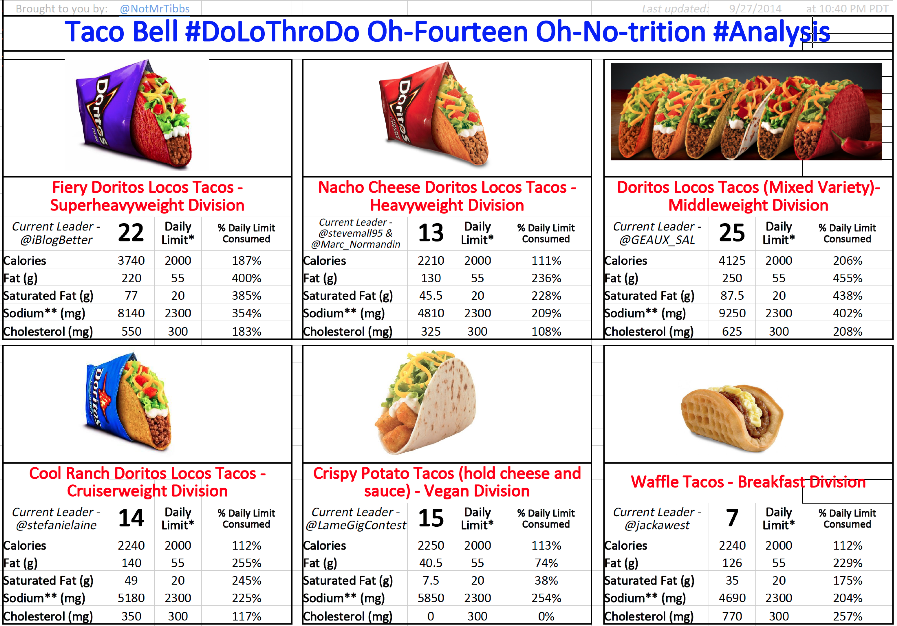 And here, for all of you, is a Storify of the highlights of the day's action:

Please feel free to share your own testimonials and congratulations to one another in the comments below. We love you all and we'll see you next year.