Sons of Anarchy: Playing With Monsters

It's the third episode of the final season. What was ridiculous and what didn't make sense? SPOILER: most of the episode.

Share All sharing options for: Sons of Anarchy: Playing With Monsters

The third episode of the final stretch of "Sons of Anarchy" is probably the best one of the season so far. That's not to say it's "good," per se, but it's definitely better. Let's dive in, shall we?

- Regarding a heavy box:

GEMMA: What you got in there? Guns and ammo?
NERO: Books.
GEMMA: Ah. Way more dangerous.

- Not The Fat Prospect (RIP) has sex with the babysitter in front of Jax and Tara's baby.

- So much gangland warfare! Only like nine people die in this episode. That may be a record low. The Sons kill three 1-9ers and then Nero's crew hops out of a panel van later and machine-guns a bunch more 1-9ers to death later on in the episode. We know everything about violence and nothing about suffering.

- Remember the casual racism I mentioned three bullet points up?

LADY: Some guys are here to see you.
TIG: What color?
LADY: Black, and blacker.

Jesus Christ. I mean ... look, the lady starts off being less racist than everyone else, so at first you're like, "Oh this is a reminder that the Sons are all racists, because that lady didn't think to mention their race, just 'some guys.'" But then, nope, it's just a setup for a casual racism "punchline." Everyone in this show is terrible, which I know is the point.

- The episode ends with Jax brutally beating a man in his own home because he backhanded Gemma. A full-extension jump-stomp to a grounded man's head counts as a denouement, right?

- Again in the last episode, I mentioned about how every 10 minutes in this show, there's another docks or construction site meeting with a different group of gangland leader types. But what I forgot about, until this episode is how often these devolve into RPG fetch quests. YEAH WE CAN PROBABLY DO BUSINESS. BUT FIRST I GOTTA LIL PROBLEM YOU CAN HELP ME WITH, says interchangeable gang guy. It would be awesome if, in like episode seven of this season, one of these guys follows that up with YOU GOTTA KILL 15 GNOLLS AND BRING ME 8 GRAVEYARD ELIXIRS.

What would the class groups be in a "Sons of Anarchy" MMO game? Man of Mayhem, Crow Eater, Nomad, Legitimate Businessman?

Dammit, now i want to play this hypothetical game.

- One of Nero's sex workers' father shows up at Nero's brothel to knock his daughter around and steal her money. He hits Gemma, then Nero starts punching him. They turn around to see Jax's son Abel standing in the doorway, watching everything. For some reason, this gives everyone pause and has them soul-search about who they are and what they've subjected this innocent child to.

1. maybe don't bring your grandkid to a brothel how bout
2. This kid has already been kidnapped by the IRA, sold to an orphanage, had untold people killed in front of him and was nearly impaled by a tree branch when Gemma fell asleep at the wheel, high on drugs. A dustup at the house of ill repute is your wakeup call? NOPE.

Gemma has a heart-to-heart with Abel and assures him, "Your daddy is a good man." lol okay

- Jax tells his new 1-9er friend to set up a fake meeting among the mutinous 1-9ers. The guy says he'll make the call. In the very next scene, Peter Weller tells the Mayans about the meeting going down. They're like, "How do you know about this, Peter Weller?" and Peter Weller says, "I know everything there is to know within a 10-mile radius." This writing is so lazy, it's the title of the new Garfield anthology.

- Nero gets invited in and the babysitter says, "Gemma made cake." I was taken aback. "Gemma made cake" are three words I never expected to hear on this show. It turned out she made pineapple upside-down cake for the guy who gets beat down by Jax at the end of the show, but even that doesn't make any sense. "Gemma made cake."

- Gemma gives her birds to the babysitter. That's a storyline I didn't expect to get tied up and it sort of puts a nice bow on Gemma/Clay. Of course, later in the episode, she's seen talking to a pair of crows as though she's confessing things to Tara, but I'll take what I can get.

- Theo Rossi's facial hair. He's definitely gone without shaving for months and this is the result: 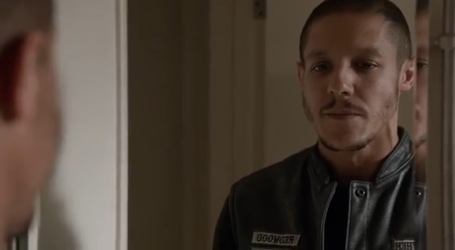 - For the first time, I noticed that Drea de Matteo, the guy who plays Happy and Not The Fat Prospect (RIP) have all made the opening credits for the final season. I'm legitimately happy for them. I care about weird things with regards to television performers.

- In a sometimes-lousy show filled with legitimately great actors, Mark Boone Junior is possibly the best actor of them all who never has anything at all to do. I relish his few scenes. GIVE BOBBY ELVIS A STORYLINE YOU CADS.