Sons of Anarchy: Toil and Till

In this episode: death, but no bare butts. So we're on the wrong side of the ledger already.

Share All sharing options for: Sons of Anarchy: Toil and Till

The second episode of the final season of "Sons of Anarchy" is here, so it's time to watch reprehensible people kill a bunch of strangers indiscriminately! It's okay, though, because they love their mama.

- They cut the Asian guy's head off and put it in a box of fortune cookies. Because this is what passes for nuance in the mind of Kurt Sutter.

- People keep talking about how smart Jax is, for the millionth episode. What a cunning strategist. He basically slipped on a banana peel in season one and has been collecting buckets on his legs and arms and has a massive turkey jammed over his head and he keeps falling down stairs but people won't stop looking at him and going, "what a mind!"

- There's literally a new sheriff in town and it's a LADYSHERIFF. She brings Unser back onto the force as a consultant, because every police department can use a guy with terminal cancer and deep criminal ties. OH BUT WAIT Unser getting back on the force is just a plot device so Gemma can go into Unser's trailer while he's asleep and see massive stacks of files labeled INVESTIGATION OF MURDER OF TARA. Paper-clipped to the top page, of course, is a picture of Unser and the words UNSER IS NOW A COP AGAIN AND TOTALLY WORKING ON THIS CASE SO WATCH OUT GEMMA. Seems like Gemma will take this as bad news!

- Massive shoot-out in another farm and orchard. Yet another in a long, storied list of "MC shoots at like 20 people with machine guns and kills them all, despite none of the SOA members getting hit even once."

- The casual racism is back up to season one levels.

- This is the second straight episode (of two episodes so far this season) where the Sons are shown digging a mass grave for all the people they've killed in this episode. They even meta-joke that they might be running out of mass grave sites. If you add up all the people SAMCRO have killed, it's probably way more than Stalin. Forget the FBI, someone needs to call the Hague on Jax Teller.

- Drea de Matteo reminds Gemma that Jax's oldest son Abel needs to register for "pre-K" and Gemma reacts like she's been told her grandson is headed to the gas chamber.

- You can tell it's the most awful thing in the world for the writers' room to string out the "we have to get all our pieces in a row to get out of the gun trade" week after week after week. Every 10 minutes is Jax, Chibs and Bobby meeting with a different gangland leader and nothing they talk about ever makes sense or matters and you get the impression every week's writer is typing these scenes with their head back, going "BLUH BLUH BLUH WHEN CAN I GET TO THE GENITAL MUTILATION SCENE ALREADY"

- Jax and SAMCRO find two patsies to pin their gangland killings on and kill them and I guess somehow convince the gang they double-crossed that two hillbilly stoners pulled off a daring daylight raid on 20 dudes and killed them all? Sure. Sure.

- And they killed a guy who is important to the guy who runs their Nomad Indian Hills charter*, who finds out that it's SAMCRO because one of the guns they planted is one that THAT VERY GUY was using earlier that day, because Jax is, in fact, NOT smart and is, in fact, RATHER stupid.

- Jax sheds a single tear while sleeping with his son. Because ... well because he misses Tara, probably. It's not clear. It's almost certainly not because of the 20 dudes he killed this episode, because again, Stalin.

- Jimmy Smits. I've never been much of a fan of Jimmy Smits. His acting style is usually abrasive and heavy on scenery chewing. Almost as though he cut his teeth on a Stephen Bochco procedural or something. When people were praising is awful, AWFUL turn on "Dexter," I was baffled that they could be watching the same show I was. But his role on "Sons of Anarchy" is EASILY the greatest role of his entire life. He's absolutely great and pretty much the only truly sympathetic character on the show.

- Juice. Theo Rossi is the only other character on the show one could conceivably root for to come out of this okay. The Jesse Pinkman of the SOA universe, for all intents and purposes. Theo Rossi does a great job with what little he's given, which these days is "mope and have a conversation on a couch with Gemma." I'll take it.

- Tig and "Not the Fat Prospect (RIP)" should definitely get a buddy-cop spinoff. 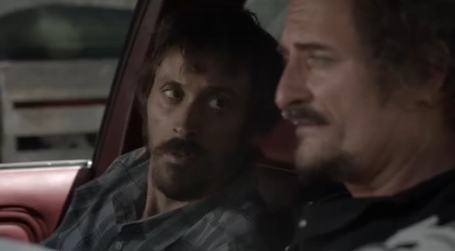 I don't care if they're both dead at the end of the season. Kim Coates' Tig is too great a character not to get some wacky spinoff.

* Originally I thought it was the Nomad charter, because the show doesn't make any sense. Thanks, Kyle Rancourt!