Couch Census, July 6th Update: There Are Now Over 600 Couches In The Entire World.

Share All sharing options for: Couch Census, July 6th Update: There Are Now Over 600 Couches In The Entire World.

As it turns out, this is not an exercise in couch-counting at all. Instead, it is an exercise in staring myself in the mirror and acknowledging my hubris, my shortcomings, my foolishness. I am the grand idiot of the god-damned village, but I will stand on this crate and bang this saucepan no longer.

Indeed, the last few weeks have taught me a lesson: don't be so hasty to declare the couch census concluded. Every week I've announced that I believe we have counted every single couch in the world, and every week I have been proven wrong by reports of yet more couches, both domestically and abroad. You guessed it. I must update the couch census yet again:

For the first time, I will refrain from telling you that we have counted every couch in the world. It is likely, in fact, that we have not. Please see the following chart: 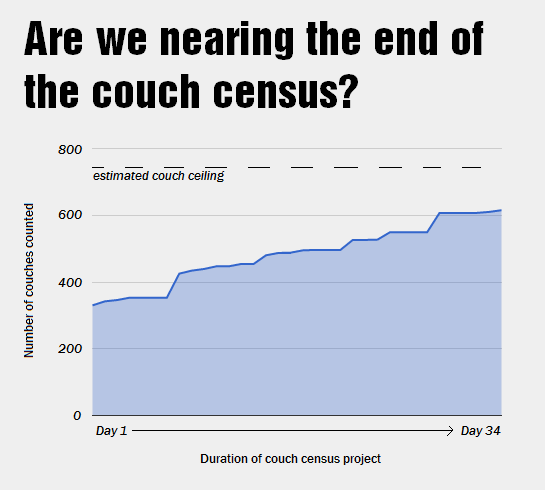 On Day 1 of the Couch Census, the comments section exploded with new reports of couches -- over 350 in a single day, in fact. The number of new couch reports has dwindled since then, with small spikes interrupting long phases of largely stagnant data.

The fact remains that the number of reported couches has continued to climb. So how many are left to count? If the statistical trend reflected here tells us anything, it's that the couch census is nearing completion.

As you can see, I have added my personal estimate of the ceiling for the number of couches there can possibly be on the planet -- 750. In truth, I imagine there are closer to 700, but I have been wrong before and I must prepare for the contingency of being wrong again.

Anyway. Once again, friends, thank you so much for your contribution to this exercise. Together, we will find answers. And as always, if you have any more couches to report, please do so in the comments section below.