Couch Census, July 20th Update: There Are 698 Couches In The Entire World!

Share All sharing options for: Couch Census, July 20th Update: There Are 698 Couches In The Entire World!

I knew it. I knew it! As the tally of couches reached 664 a week ago, I theorized that our couch count was slowing down because we had counted almost every couch in the entire world. I estimated, in fact, that there were probably around 750 couches on the planet.

Well, look at it now. The count continues to slow down, with fewer and fewer reports coming in.

Goodness gracious, that's a lot of couches. As always, if you think I'm lying, you are invited to consult my data via this Google Docs spreadsheet.

More happy news! Progressive Boink's own Bill Hanstock, as of this week, is the proud owner of a brand-new couch. Have you ever wondered what purchasing a couch would be like? Well, we're here to clue you in on the ins and outs. Take it away, Bill!

A couple of months ago, Kristen and I decided that we needed a new couch. We decided this because I sat on the couch too fatly one day and broke one of the springs. It was not the coolest, nor the most chill of days (in the parlance of our times). We were faced with the daunting task of ... couch-shopping.

The first thing we did was do some research online. While there was a couch on the Costco website that looked appealing, we quickly discovered that the drawback to online couch-purchasing is that you aren't able to actually sit on said couch before you're spending upwards of one hundred dollars (!) to have it shipped to you, butt-unsat. What if the couch arrives and is as uncomfortable as a plank of wood wrapped in Brillo pads? That wouldn't do at all! I attempted to visit the Costco in person to see if they had a display model, but not only did they not have a display model, the store didn't contain couch one! (Not that any couches there would have counted towards the survey anyway.)

We were resolved to take our time and puzzle through our options. While lunching in Pasadena one weekend, we stumbled across a store called "The Sofa Company." What luck! We went inside and were greeting by a cavalcade of sofas, settees, davenports, couches, and sectionals the likes of which mine eyes had never before beheld! It was like a Willy Wonka's chocolate factory of couches! We were informed that, while the store sold these floor models, their true trade was in custom couches. They'd make you a couch any way you wanted it, including constructing the thickness and firmness of the cushions to your exact specifications! Well, to a couch connoisseur such as myself, that news fairly bowled me over! I nearly fell over backwards in a puff of smoke like Snuffy Smith being the subject of a folksy zinger!

Unfortunately, when we returned home, we pulled up the Sofa Company website (sofaco.com, not to be confused with a company that makes saffron tacos) and dabbled with their online Couch Creator tool. While most of the models touted themselves as "starting at $1,699" that was the base price for the frame, apparently, as adding fabric to the endeavor instantly added a minimum of $2,000 to the price! "Too rich for our blood!" we grumbled, and it was back to the drawing board.

Eventually, we decided to try Ashley Furniture. We went there once and took a look around and a leather sofa-and-chaise longue combination that appeared to be right in our price range. We went home and debated the various ins and outs, also discussing that Ashley Furniture offered a discount if you chose to finance your purchase. (Financing a couch! What a country!) After another week or so of hemming and hawing, we returned to the store and I applied for the financing (they gave me up to a $4,500 line of credit! CHA-CHING!), and we ordered the couch. We also sprung for extra warranty coverage, so we're covered in case (read: when) we get delicious barbecue sauce smeared all over it.

We actually had to wait about two weeks to get the couch delivered, since it took them about a week to determine availability and schedule delivery, and we were out of town the following weekend. But on Monday, the couch finally arrived. We were worried it would fit as well as we wanted, since we are limited on space, but it is only slightly wider than the couch-and-chair setup we had previously. But after all of that, we have a wonderful, gorgeous, and exceedingly comfortable couch to add to the survey. Take a look for yourselves: 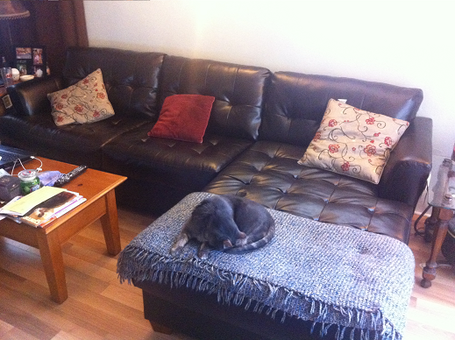 Thank you, Bill, for your wonderful story about couches! If any of you spot a previously unreported couch, please let us know in the comments.