Couch Census, July 13th Update: There Are 664 Couches In The Entire World.

Share All sharing options for: Couch Census, July 13th Update: There Are 664 Couches In The Entire World.

Whew! Well, that was a close one. We very nearly headed into Friday with a total of 666 couches, which I think we all agree would have done nothing but derail and trivialize our mission. Our mission, of course, being to count every couch in the entire world. But as it stands ...

(As always, feel free to peruse this Google Docs spreadsheet and view the data in full.)

And this time, I don't have to get down in the dumps about it! Because last week, I finally resolved to stop prematurely declaring that we had counted every couch in the world. Instead, I am taking a far more reasonable tack, and estimating that we will hit the finish line once we reach around 750 couches.

Just think. Only 80 or so couches left to count. What will they be like? What will they look like? I can hardly wait, can you? Let's first take a moment to look back and see where our couches are located. I mapped out every couch we've counted so far for which a geographical location was given. Let's see whether couches are a TRULY international phenomenon! 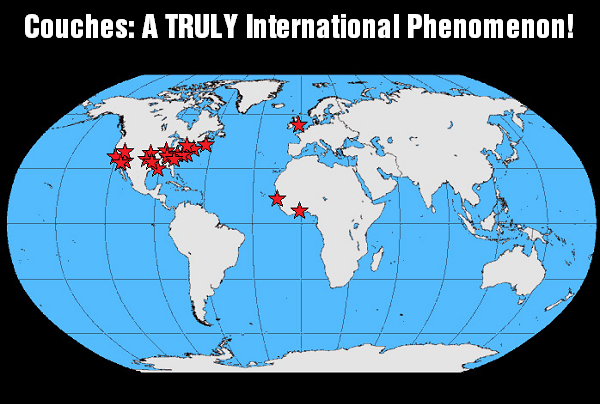 Well, friends, what say you? Have we counted all the couches yet? If you know of any that you have not yet reported. PLEASE let me know in the comments section below. I haven't had the chance to thank you all individually, but I want you to know that I really appreciate your effort, because this would certainly take a lot longer if I had to count them all myself. Happy couch hunting!