Couch Census, June 8th Update: There Are Over 300 Couches In The Entire World.

Share All sharing options for: Couch Census, June 8th Update: There Are Over 300 Couches In The Entire World.

Hello, friends! It's been quite a week, hasn't it? I've enjoyed hearing about your couches. We've counted futons, settees, sectionals, and heaps of junk abandoned on the shoulder of an interstate.

When I started the Couch Census by counting my couch a week ago, I was sure there were more. Perhaps a hundred more. But frankly, I was blown away by what I found:

Thank you so much for reporting all those couches you own or have seen. This, friends, is the fruit of our labor: the knowledge that there are 352 couches in the world (perhaps even more).

I have taken the liberty of drawing up a couple of charts to show you some of what I learned, and I'd also like to make a few supplemental notes detailing the weird, wonderful world of couches. Follow me. 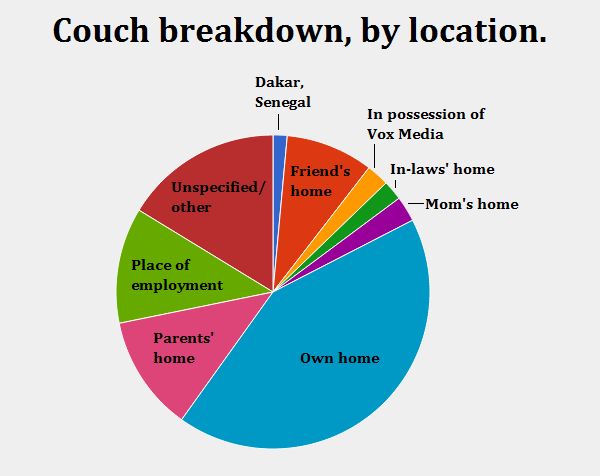 Couches are more commonly located in the couch reporter's home (146 couches) than anywhere else. Work couches (41) are exactly as common as couches reported as being at your parents' house (41). It's quite possible that our generation has embraced multi-couch living more readily than our parents' generation did.

It also appears as though Vox Media is in possession of 2.2 percent of couches in the entire world. Congratulations to Jim Nation, and everyone else at SB Nation, for such a solid showing.

It should be noted that I did not specifically require anyone to share where they found these couches, though it's certainly a good idea. Some were kind enough to share the room in which the couch was located. 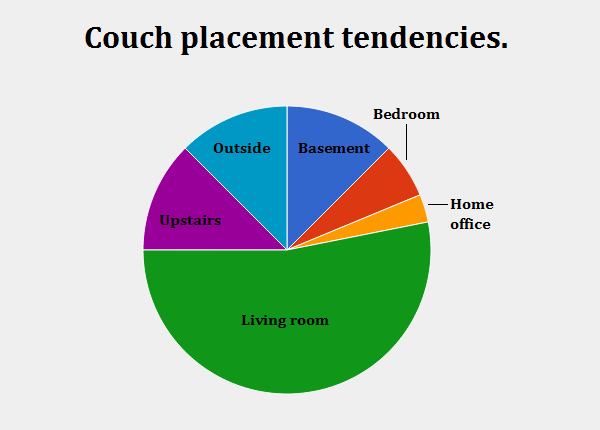 No surprise here: of all the room-specific couch reports, the majority of couches exist in the living room. There were, however, four instances of the ever-elusive upstairs couch. "Upstairs," of course, does not include couches in second-story apartments or couches in high-rise offices, but rather the second (or higher) floor of an individual abode.

As loathe as I am to distract us from the primary mission and send us off on a tangent, I really would like to hear from those of you who have an upstairs couch. Why is it upstairs? If you took the trouble to drag it up a flight of stairs, you must have had a very good reason for it. What was that reason? If you could offer an explanation in the comments, I would be grateful.

Here are some miscellaneous couch reports that I found particularly interesting:

So. Are we finished? Have we found every couch in the world? I would like to say so, but I am not certain. Perhaps our efforts were not exhaustive, and there are in fact as many as 400 or 500 couches in the world.

To find more couches would certainly be an "egg-on-face" moment for me, but I must accept the possibility that there are more couches. If you are aware of a couch that has not yet been counted, please report it in the comments. Any other information you're able to offer, as well as a photo, would certainly be appreciated if feasible.

By the way, several of you have attempted to tweet couch reports to me at @jon_bois. Unfortunately, I am unable to include such reports in the census for fear of duplicate reports, and I can only count couches that are reported in the comments section. Please make note of this going forward (if, that is, there are actually any couches left to be counted).

Once again, everyone, thank you so much for your assistance in this matter. God bless you.