Couch Census, June 29th Update: There Are Well Over 500 Couches In The World! WOW!

Share All sharing options for: Couch Census, June 29th Update: There Are Well Over 500 Couches In The World! WOW!

I'm such a knucklehead. A week ago, after having counted four hundred ninety-five (495) couches, I thought our census was complete. I reasoned that together, we had finally counted every couch in the world.

I was wrong. Apparently, my journey to couch-count completion is not yet over, and I shall complete it with my head hung low and the soles of my feet dragging across the ground. After receiving further reports of couches from you, my associates, I must update the tally.

Once again, in the interest of full disclosure, I am making the data publicly available. Click here to access the spreadsheet.

Well, surely that's the total. Well done, everyone. Let's celebrate with a chart: 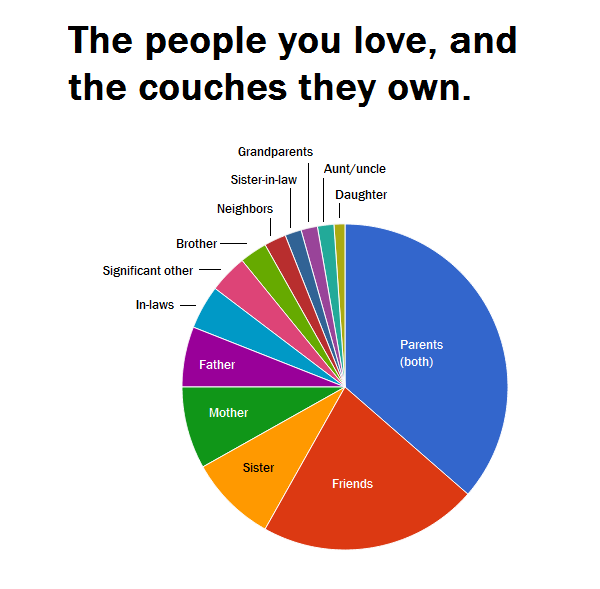 Not all of you reported who the couches of record belonged to, but of those who did, it appears that your friends and parents have most of them. These results are about what I expected, with one outlier: why do so many sisters have couches? I have two sisters and to the best of my knowledge, neither is in possession of a single couch. And why are there so many more sister couches than brother couches? Confusing. Remarkable.

It also seems as though our parents have a ton of couches. Nearly a hundred parent-couches, and yet, precious few grandparent-couches. My working theory is that just as many grandparents have couches, but they only have one. The following generation is one of material excess. I know folks from that generation that have, like, seven couches in their houses sitting around doing nothing. Why? What for? ... I'm sorry, I'm issuing moral judgment and I need to rein myself in. This study is not about that.

This study is, however, completed. Or at least, I'm almost certain it is. I'm going to put this out there, just as a formality: if, somehow, by some chance, you actually see a couch somewhere in the world that you don't think we've counted yet, please let me know in the comments below. A complete census is a happy census.