The Most Watchable Movie Bracket: A Winner Is Crowned.

Share All sharing options for: The Most Watchable Movie Bracket: A Winner Is Crowned.

I saw Skyfall over the weekend. There were a few reasons it was awesome -- beautiful cinematography; a ton of Rockin' action set pieces; decent quips; enjoyable if a little groany fan service stuff; weird little naturalistic acting touches, like Javier Bardem repeatedly saying "boop!" or Albert Finney peering fearfully through his beard like an overgrown, beardy baby. There were also about a thousand reasons it was dumb as dicks. Did (SPOILERS) Javier Bardem's master plan really anticipate all the countless tiny improbabilities that had to go just right in order for James Bond and a good five dozen other people, highly trained spies and government agents all, to fall into his nefarious trap? If so, then why was the culmination of this diabolical genius's master plan, over a decade in the making, just a big ol' courtroom shootout? Structurally, if the entire point of the dang thang, and of all the lives lost over the course of the movie, was to save M, then why did they have her just flop over and die 20 minutes after being grazed by a bullet? And on and on.

But (SPOILERS OVER, DORKS) none of that mattered, at least not as far as I was concerned, for the sole reason that it was fun as hell to watch. That's no mean feat. I've seen plenty of people get the Internet Shit kicked out of them for saying stuff like, "Heh, you'll dig the frickin' crap out of that movie, if ya just turn yer freakin' brain off!" but the truth is, it's really hard to do get that kind of movie right.

Take something like National Treasure. Or Transformers. It makes hundreds of millions of dollars around the world and spawns an entire sequel-generating machine, and yet you'd be hard-pressed to find anyone over the age of eight who actually likes it. Hundreds of people spend millions of dollars making a clattering carnival ride of a movie that distracts people by the millions, but truly pleases no one. It's really easy to make an endurable movie. It's not at all easy to make a deeply watchable one.

What makes the feat of the truly watchable movie even more impressive is that film came of age in the modern and especially post-modern eras. Ulysses came out almost 100 years ago; the Impressionists worked closer to the time of the French Revolution than to our own. Film came around and flourished just as we were picking clean the deconstructed bones of every form of art or storytelling: Even the dumbest ass among us has a better sense of precisely how art and literature work than have 99% of all people who have ever lived. A movie that can push all our buttons even as we are fully aware of the buttons being pushed -- that's a big deal. Smart but not challenging, exciting but not noisy, brisk but not insubstantial, the watchable movie is one of the great achievements in modern art.

And we found the most watchable of all the bastards. We voted in an orderly manner, on Election Day, and we found it. Congratulations, dudes. It is Die Hard, and it got to where it stands from weeks and weeks of rigorous polling and agonizing matchups. It managed to beat Hot Fuzz, Road House, Slap Shot, Terminator 2, and, finally, Raiders of the Lost Ark. It features both Carl Winslow and a proto-Urkel, it stars Bruce Willis before his head turned into a big chunk of Silly Putty, and it set the template for almost every action movie trope adopted by Hollywood after its release. It is great. Yippee ki yay, Mr. Falcon. Today we are all Mr. Falcons. 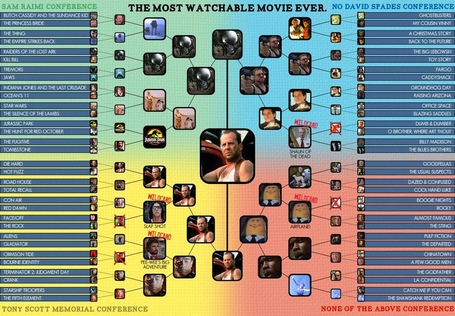