Share All sharing options for: The Most Watchable Movie Bracket: Election Day.

It all comes down to this. After two months, hundreds of nominations, 64 initial entries, four wildcards, and a bunch of worthless turds threatening the possibility of the grandfather of Epic Movie winning this whole thing, we have arrived at a final faceoff. Here's the bracket: 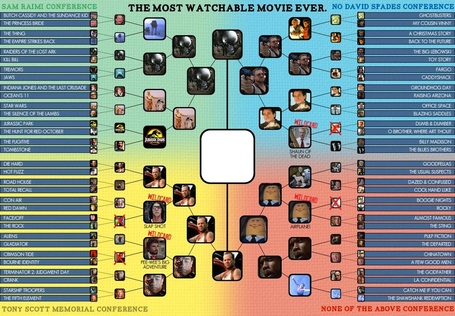 Your task is simple. Vote below to determine the most watchable movie of all time. Both choices are action-adventure films punctuated by comedy and starring mildly to moderately smug white men entering middle age ("Appropriate choices for Election Day!" - Andy Borowitz). Both made in the '80s. Both spawned two fairly immediate sequels and then one super shitty one many years later. Only one can emerge victorious. Polls close at midnight tonight. Choose wisely.