Mark Teixeira runs like he has everything up his butt. This is an invitation to get recursive.

Share All sharing options for: Mark Teixeira's butt and the Teixeira fractal.

A couple of months ago, just before I appeared on an amazing podcast to elaborate further, I made the observation that New York Yankees first baseman Mark Teixeira runs like he has everything up his butt. I don't mean this in the juvenile sense, suggesting that he has a poopy bottom. Nor do I mean it in the manner of the proverbial "stick up the butt."

I mean that quite literally, Mark Teixeira runs like he has everything up his butt. Kittens. Oboes. The concept of ennui. J.D. Salinger. Papua New Guinea. A year's supply of ham. The complete Motown catalog. The Cincinnati Bengals. They're all crammed up there, and that's why he runs like that. It's the only rational explanation.

Here, just ... take a look at this clip. While it's not the epitome of what I'm talking about (the textbook example would be Teixeira scoring from second base without a slide on an RBI single), it's still got all of the components of Mark Teixeira having everything up his butt. He legs it out like he's got everything clattering around in there. After he lunges for the bag, he draws his legs in tight and clenches, lest the universe come toppling out of his nethers like bathroom string theory.

Via my Twitter discussions with the insanely talented Craig Robinson of Flip Flop Fly Ball fame, we quickly discovered that if Mark Teixeira runs like he has everything up his butt, it would naturally stand to reason that he, in fact, has himself up his butt. (Along with all of us, of course. Perhaps we are merely living this fleeting existence inside of Mark Teixeira's butt as he goes first-to-third on a Nick Swisher single. We'll literally never know.)

This recursive paradox theory was sparked by a relatively innocuous tweet.

@sundownmotel There's gonna be a restaurant in there, like in Being John Malkovich, but full of Teixeiras.

This supposition is, of course, entirely accurate. Craig then imagined that these recursive Teixeira diners may at some point opt for the frowned-upon practice of "dining and dashing" (an alliterative reference to departing from the restaurant without paying one's tab). But of course any "dashing" done by Teixeira doppelgangers while inside Mark Teixeira's butt would being that they would each be running like they have everything up their butts -- which means --

Craig suggested that image needed to be a poster. Luckily, that is what he does for a living. Without further ado, I present the end result of the "everything is up Mark Teixeira's butt" theory, courtesy of Craig Robinson.

Ladies and gentlemen -- the Mark Teixeira fractal. (Note that the below image only a browser-friendly preview. For the full majesty of this visage, you absolutely must click here.) 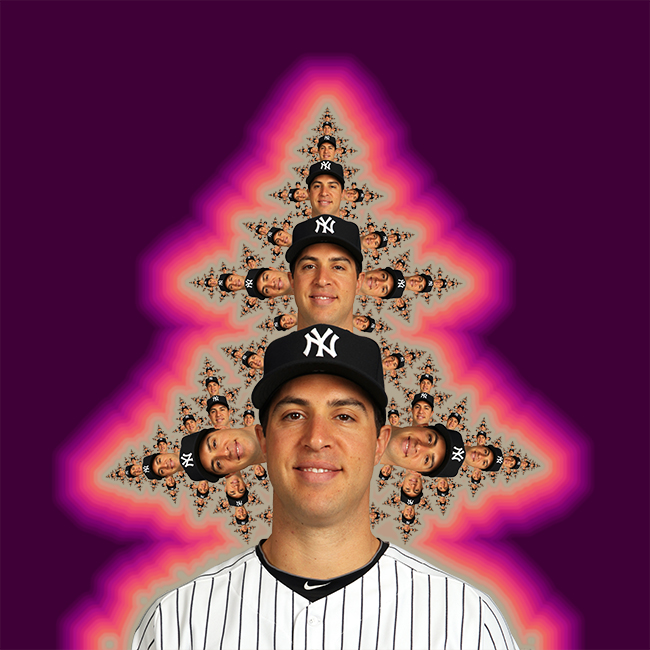 My god. It's full of stars.

(The stars are also up Mark Teixeira's butt.)