This Saturday, Kentucky Derby season is ushered in with Thunder Over Louisville, the largest fireworks show in America. It's upstaged by an air show of America's most fearsome fighter jets. They are evil, and terrible, and beautiful.

Share All sharing options for: Thunder over Louisville: Worshipping the death machines

Thunder Over Louisville is the largest fireworks display on the continent. It really is something. 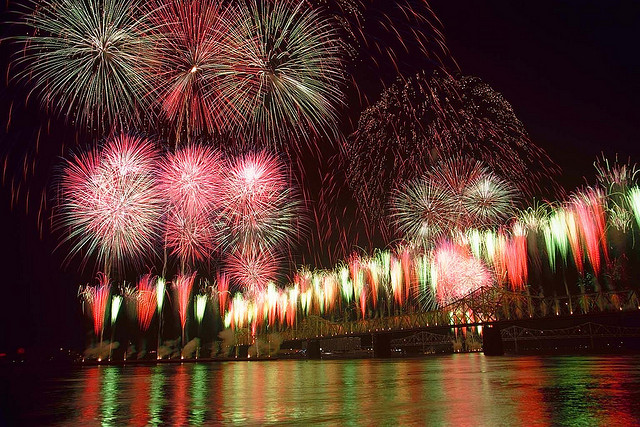 You feel it in your chest just as well as you hear it. I grew up about nine miles from the bridges, and the noise would scare the hell out of my dog. It might well be America's loudest thing, and to me, it completely outdoes the Kentucky Derby, the event it's supposed to usher in. It's deafening, and ground-shaking, and sort of Sun-like.

And the fireworks, in turn, are outdone by the air show that precedes them. Have you ever seen an F-22 Raptor perform a vertical climb?

I watched an F-22 do this during Thunder 2009. It was cruising, slowly, not far above the Ohio River, and then the nose turned up, as though it were performing a wheelie. And then it shot upward, growing smaller and smaller, until its wings looked like little arms and it resembled a person in those Christian comic books about the end times who was being Raptured. And the sound, of course, was like a perpetual explosion.

It's a 32-ton aircraft. It's a 32-ton thing that can shoot up in the air, at a nearly vertical angle, at 200 meters per second, and it's a 32-ton thing that can reach 65,000 feet and travel at twice the speed of sound. The latest estimates put the age of the universe at about 13.77 billion years. We can't know this, but we can suspect that the universe has never seen a thing like this, natural or otherwise, that can move defy gravity and change direction like this. We were just a collective of little carbon lifeforms, staggering around the planet and re-arranging stuff. But we have this now, this profoundly unnatural thing, that perhaps the universe has never, ever seen.

It's certainly the single most amazing thing I've ever seen, and it isn't even close. And of course, we haven't even discussed its military capabilities. It's designed to be difficult to spot with the naked eye. It employs stealth technology that render it invisible to radar. Its heat and noise emissions are carefully controlled, so as to avoid detection. It can deploy electronic attacks that disable enemy computer networks. It can fire missiles capable of destroying a target a thousand miles away. It--

This is a machine for killing people. That it what it is for.

A single F-22 costs about 3,500 brand-new BMWs. Watching it Saturday will cost you an hour of sitting in traffic, and perhaps the cold you catch out by the river. If deployed in combat, depending on the estimate used, it will cost an average of two, or five, or 10, civilians their lives for each enemy it kills.

I'm horrified of war. I'm not built for it. I'm not built to fully process the lives and deaths of the innocents. I protect myself from feeling their deaths by seeing them as little numbers, and knowing how I would feel, by proxy, instead of feeling. It's a measure of disrespect, reducing these people to numbers, but it's the only way I know to protect my feelings (which, apparently, are what's really important here). But even through this little exercise, I know the shame I should feel.

God, I wish this plane and the stealth bomber and the Apache helicopter would never be used for what they were for. I don't care how much they cost. I don't care that they require my tax money. I don't give a shit. I want them to fly over the river, their empty munitions bays empty to allow them greater maneuverability, creeping under the bridges, roaring over the delighted hundreds of thousands of people, rocketing into the stratosphere, being fundamentally unlike anything that has ever existed in the history of the universe.

I think of that vertical climb again, and this profound sense of awe comes over me again. Is The Future always in ... the future? I feel that at some point, it would be appropriate to ask whether The Future is a thing we can actually reach. In fact, I think we're here. Four hundred years ago, we didn't know what bacteria were. Thirty-seven years ago, we sent a thing to Mars. Fifteen years ago, I instant-messaged a person in Turkey. We are in the future, and we have been here for a while.

That our most beautiful, staggeringly forward achievement is an instrument for killing folks, and that a great many of us are okay with that, tells us a lot about The Future: that it really isn't all that different. We're still animals. Now we're just animals who can build a God.

I don't know how else to explain a being like the F-22, though it's certainly a God of the Old Testament, the sort that will turn you into salt for looking at it sideways. Watching it makes me feel like a caveman. I know it's built for evil things. I wish it never existed. It does, here, now, and it looks like the monster all those cave paintings and hieroglyphs were trying to tell us about. For a moment, when its nose lifts and it shoots into the clouds, I feel, falsely, like it transcends whatever it was for, and it exists only to be the most sophisticated thing in the universe. It is.