Every company must begin somewhere. When you're a fledgling business, you have to get people to pay attention and stick around long enough to sample what you're putting out. Way back when most big companies started out, they could get away with outright lies or claims of malady relief or hell maybe William Randolph Hearst would just send some dude to rough you up a little until you bought his paper.

Nowadays, most (probably all) of those things are pretty illegal. To make matters worse, the Internet exists, so not only can you read shitty Yelp and Amazon reviews of stuff, you can also click over to a better thing and forget about the first thing faster than you can imagine.

You know what most companies have to rely on now? Press releases. And hoo boy, can they be silly.

And this is how the Sniper Putters press release kicks off:

Times are changing in the world of golf. Whether it's Rickie Fowler's neon shirts or the brazen style of the younger players, it's clear the game is no longer a country club sport.

Dig those neon shirts! What a wacky thing to have happened in golf, where silly clothes have never before appeared.

Sniper Putters, the "coolest" club on the market has established itself as the Rock N' Roll brand of golf; loud, yet unique and effective.

Sniper Putters are the "coolest"! Not in terms of temperature, as you may be thinking, but rather a subjective aesthetic measure of hipness. Try wrapping your heads around that little slice of Rock N' Roll, squares.

"Call it Rock and Roll, call it outside the box, we want to turn heads and remove that stigma and let everyone know golf is not only a sport, its' a Rockin' good time," Sniper CEO Dan Roland said, "The most important message we empower at Sniper Putters is our one word motto: We want to make golf "Cool".

Call it "Rock" and "Roll," call it outside the "box," but we're -- wait, what stigma? You haven't said anything about a stigma. You're removing the stigma that you're thinking outside the box? Well, okay dude, it's your company. Make golf "Cool." I double-dog-dare you.

But to be successful in the game, Sniper knows that it needs to have more than just flair. Their putters have a unique hosel that combines traditional with center shaft position that appeals to every golfer. Just the name alone has created a buzz across the golf world. The concept is simple; take the most complex part of the game and throw caution to the wind. Once golfers realize the performance of the putter is better than any other club they have picked up, it'll be just a matter of time before Sniper becomes globally known for its brash style and goal to preventing three-puts.

The concept is simple: THERE ARE NO RULES. Except that they're just saying that the "hosel" is different and that it's traditional otherwise. ARE YOU READY TO GET XXXXXXXXXXXXXXXXXXXXXXTREEEEEEEEEEEEMMMMM.

Also I think it would probably be spelled "three-putts." Unless they're talking about preventing placing three things next to one another, in which case I think that would be an OCD problem, not a golfing problem.

"First off, everyone and I mean everyone is drawn to the name and the logo," Roland said, "Just the name SNIPER creates a buzz and throw in the cross hairs with the green primary color of the logo you have the only putting company that turns heads and creates a double take."

"Look, dudes. We got a real B.A. logo here, pardon my francais. You think anyone can resist a friggin' hitman-style crosshairs AND a primary color? There's a reason Bret "The Hit Man Assassin" Heart (sic) was the best there is, best there was and best there ever will be. Try walking into a friggin' golf club store or whatever and not buying six or seven of these bad boys. Sure, that's probably too many putters, but we won't stop you."

"We do not use inserts for our putter face and we use stepless shafts to maximize the feedback and feel when you make contact with the ball," Roland said, "Our cross hairs alignment gives you the lateral and horizontal alignment making sure you are square at address leaving you with one simple task - straight back, straight through. This gives you the confidence to eliminate or reduce your three putts and make more pars and birdies."

I don't know what any of this means and this guy probably doesn't, either.

Sniper recently signed its first brand ambassador David Morland who is returning to the Nationwide Tour. He was first introduced to the "Rebel" putter at the PGA Tour Show in January. Since then, he hasn't been able to put the club down.

First of all, the Nationwide Tour is a NASCAR thing; you can't fool me. Secondly, the "Rebel Sniper"? Nobody under the age of 50 works at this company, do they?

"I lost count of how many putts he made in a row without missing," Roland said of his first meeting with Morland, "He turned to me and asked if he could take it home and this is a guy that has used the same putter for many years on both the PGA and Nationwide tours. To switch putters on the spot; that speaks volumes."

"To be fair, I was pretty ripped on Harvey Wallbangers at the time. That last part may have been sheer hallucination."

Sniper CEO Dan Roland, better known as the "Rebel on the Links",

Not a fucking chance.

came up with the concept for the company while trying to become the next tour pro himself.

He played in a few mini-tours and Monday qualifiers, but never could get over that hump. But he also realized that he wasn't comfortable with any of the putters he was using. So, using the old napkin drawing theory, he came up with the design for Sniper Putters; a club that is unique, raw and pure; a club that sells itself.

so what's with the press release then

"The theory behind the name SNIPER is as we know it, military or police snipers perched on a roof or in the bushes waiting to make that very important shot that could save a life or end a threat," Roland said, "They are the elite marksman and they are called on for the most pressure filled situation one person can endure. A Sniper lives by the creed "One shot, one kill". They don't get a chance to shoot twice so they have to be deadly accurate. On the golf course the mission is to eliminate three-putts. When the spotter has his sniper on target he gives him the order "SEND IT" and he pulls the trigger. When you line up a Sniper putter, you whisper to yourself with confidence, "SEND IT"...and you find your target every time."

"Ya see, I wanted something that would combine the elegant, pastoral beauty of the game of golf with a grim reminder of the cruel and violent world that we live in. I want golfers never to be able to let a second go by when they aren't thinking about ending the life of another human being. That's what golf is all about, in my humble opinion."

Roland is meeting with major retailers to discuss exclusive agreements to carry Sniper Putters, some of which will have global appeal. The company is also looking to sign an LPGA Tour player as Brand Ambassador before the end of the season and continue the kind of buzz that has helped them become part of the new world of golf.

Don't forget: murderous golf practices can also be for the LAYYYYDEEEZZZ.

All Sniper products are available on the company website: www.sniperputters.com

Well, best of luck with that, Roland et al. I'm sure your company will continue to redefine "cool" and will eventually "flourish."

Oh and by the way, at the end of it all? It's just a putter, of course. 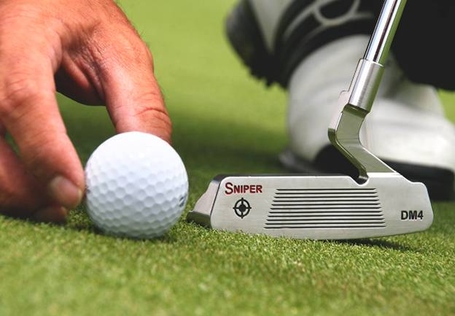 Can I interest anyone in my new company, Calm Garden Walk Putters? They're not Rock N' Roll, but they don't have a complex about it or anything.