Share All sharing options for: Story Of Intrigue: 'Driving.'

"Stories of Intrigue" is a pastiche of terrible amateur genre fiction. Another way of explaining it: here is a story written by the dumbest m'f'er taking Intro to Creative Writing at your local community college.

Here is "Driving," a story about a stuntman and getaway driver. It does not resemble and was not influenced by any other work of fiction, ever. 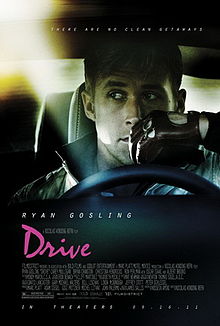 Scene: the parking lot of a local Mart. Hotrod Gosling sat in his custom built Ferraro. It was a thing of beaty: 500 gallon's of feul? Check. 1,000 M.P.H. in the transmission alone? Check. Window's that said "Carlite" in little white letters in the corner? Check. Thing in the middle where you put you're leftover ketchup's from the Arby's? Check.

The Ferraro's engine began to purr as though it was a animal (not a car). Hotrod chuckl't. "Easy there, Geraldine." He patted the thing in between the steerling wheel and windshield. "Easy girl. I'll put the petal to the medal as soon as my robber friends get done with the robbery."

Manwhile: thing's weren't exactly Easy Street (car reference) for his robber friends. One of them sneered. "This is a rubbery. Hand over all of your d'oh. Put it in this satchel." The clerk nervously gather't his money and put it in the satchmo. "Here is you're money," he said. "NOT. Your dead." He pulled out a 44 Mangum and shot the robber in the face and head until deader then charchoal.

Hotrod's ear's perked up. "I know the sound of that gun," he said. "That's a 44 Jeff Mangum. Holy frickin' crap!" This was a Wrobbery Gone Wrong. Hotrod press't the "on" button on his car, pushed the pedestal to the medestal, and hightail'd it out of their.

It was only a matter of time before the fuzz showed up. Hotrod chewed on a toothpick for which was for Symbolism. He yank't the gas cord and shifted into high gear. 100 RPM. 200 RPM. 500 RPM. Any faster then this and this car was gonna blow itself to Kingdom Kong. "Don't fail me now, girl," said Hotrod. "You're are a female girl."

Suddenly: siren's. The cops where 0ing in, the wail of there sirens joining in chorus as though Rockapella. Hotrod flip't on the radio. "Heh. My favorite jam."

Much as though the song, Hotrod had to Drive. He did a thing where he jiggled around the stick thing on the bottom of the car and then turn'd the wheel a bunch. His tires screamt like a bunch of frighten't grandmas at a Mudvayne concert. "Come on, baby. Don't let me down now, human baby car," he gristened through his teeth. Then he pulled the other extra brake right next to the stick thing. "Whoa," said the cops. "The cops are fooled." The cops were fooled.

But their was one thing left for Hotrod Gosling to do: put on a wierd mask and scare the crap out of the villain (there is a villain). He chased him on the beach wearing his wierd mask that made him look like Mr. Bald. "Oogy boogie boogie," he said and then the villain went into the ocean and drownt.

After giving some lady some money because he is a feminist, Hotrod hit the rode. He cranked into 10th gear. He began to muse. "Life is like driving a car," he genuflected. "Sometimes you're are going 100 RPM on the rode of live, lifing as though 100 MPH at a time, pental to the mental."

"And sometimes? You just Dryve." He hit the button with the red triangle thing on it, and the car did whatever it does when you do that. And then he was gone.