The Internet's Future, From 1995 Incarnate.

Share All sharing options for: The Internet's Future, From 1995 Incarnate.

I know we don't like to think about it much, but there was a time before the Internet as we know it existed. For a big portion of my life, the only way I knew of to make computers talk to one another was for a businessman or government guy in a movie to take the handset of a rotary phone and press it into one of those things that hooked up to a big fancy computer that had two round rubber parts for the speaker and receiver. I'm sure you have no idea what I'm talking about, but watch Tron or War Games sometime and you'll probably see the device in question.

Anyway, nobody I knew had one of those things, so the concept of "Internet" was still pretty foreign to me. In addition, I came to the Internet late compared to all my friends. I was the dude who always had to go to a friend's house if I wanted to see something online, but that was always just during my last couple years of high school (I AM OLD). Further, back then, "the Internet" was always just a weird bulletin board, or a super-pixellated crude animated GIF of boobs.

If you asked me in 1995 what the future of Internet was, I don't even know what I would have said. Maybe "Dave Mustaine rules." Luckily, no one asked me. Instead, they asked some other kids ... kids who turned out to be crazy geniuses.

The Atlantic shared this mind-boggling PSA from 1995 asking kids what the Internet would look like in 1995. It is 100% medically accurate.

So we're all very impressed about how spot-on these kids were. By which I mean "the teachers who wrote this script." But what I'm much, much, MUCH more impressed by is the sheer 1995-ness of this video. This is very likely the most 1995 video ever created. Let's look at the evidence.

The creators of this video thought that the following two sections of footage were the two most representative depictions possible of "The Internet."

The first image is just some strangely animated Levi's page viewed (of course) on Netscape Navigator.

The second image culls from a wider range of 1995-esque web pages, once again on Netscape Navigator.

DEEJAYS HOT TOPICS STREET. Has there ever been anything more 1995 than to just use a workboot print to sell(?) something. I'm pretty sure that's from an old Doc Martens webpage, which makes it doubly 1995. Perhaps even triply.

What really puts this video over the top though is, naturally, the children delivering awkward line-readings. You've got mom-jeans gal here, so terrified that she's reaching behind her back to grab her other arm. No one has stood like this since 1999 at the latest. Jesus, what did we ever do with our hands before cell phones were ubiquitous? 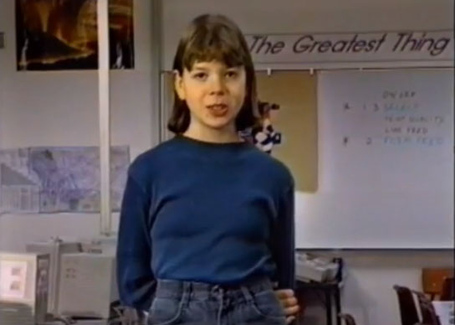 Next up is Michelle Tanner-hat. No one actually ever wore these scrunchy-backed hats except in sitcoms and they certainly never wore them backwards, so I'm calling bullshit on this one. 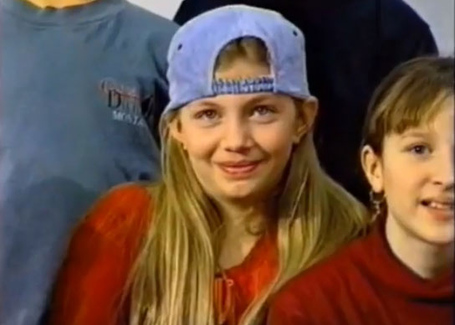 The only way this girl could be any more 1995 is if she was wearing overalls with one strap unfastened. Good lord, look at the sheer level of smugness on display here. If we could harness that smug, we could power America for years. It's probably a pretty safe bet that this lady thought she was going to be a big star. Thought there was a "T.G.I.F." sitcom part in her future. Hope that worked out for her. Who knows, this could be Michelle Williams.

And of course, the prize pig in this Internet state fair: 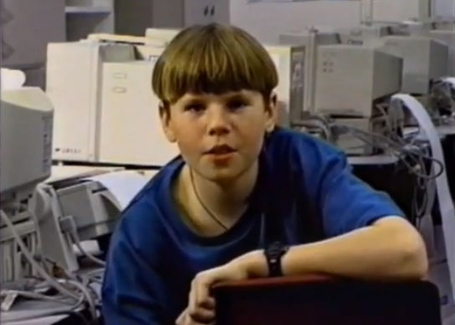 Jesus Christ, this kid just IS the year 1995. Mushroom cut, rope necklace, solid primary-color T-shirt and a big honkin' digital watch. Mushroom cuts were the hottest thing ever and all my friends had one. I really wanted to get one but my parents refused, claiming they didn't want me "looking like an idiot." I have never been prouder of my parents than while looking at this kid. Sweet fancy Moses, that is a dumb-looking haircut.

And this doesn't even get into this kid's obvious bad attitude. Check him out in the scenes where the kids have to say something in unison. He's playing that fucking seventh-grade game of "I'm too cool to look at the camera and/or I want to be a dick, so I'll play like I'm distracted by something else so no one can yell at me for just being an enormous butthole." Dig his technique:

"WWwhhhy oh what's back there oh hm? UH YEAH Mrs. Stevenson just something fell down back there I think GOSH."

This next group image has something for everyone, I think:

You've got glasses-girl, focused like a motherfucker, jaw clenched in anticipation. "I WILL NOT BLOW THIS I WILL NOT" says glasses-girl. You've got lower-left hand girl, doing her best Christopher Walken impression. Lower-right hand girl is absently answering the question while cleaning out some ear-gunk. Hat-girl is distracted, thinking about becoming besties with Jodie Sweetin. Mushroom cut is back at it AGAIN, only this time he's helping to distract braceface, who may have missed the line ("YES") altogether. Really, the kid in the center is bringing this all together. He's the Internet MVP.

Thanks, 1995. You were terrible, although you had probably an appropriate level of cats.