The iPhone is a god damn miracle. An absolute god damn miracle. It's a computer -- a computer better than my actual computer in many ways, and a phone, and whateverthefrig else you may need it to be. There's probably a knife in there somewhere, but I haven't found the right button to deploy it. My point is: there is absolutely no way I should even be able to comprehend how amazing it is that I can download a free video game THROUGH THE AIR, have it installed in seconds and play that game ON MY WIRELESS, HANDHELD TELEPHONE. Did I mention that these games can be played BY MOVING MY FINGERS AROUND ON THE SCREEN?

That said, the iPhone store has some absolutely horrible apps on it. Apps that definitely shouldn't exist. Things that are so soul-crushingly awful that you really shouldn't think about the thousands of man-hours that were spent bringing these wretched abominations to life.

This is the first entry in a series of the worst sports game applications that I can find on the iTunes app store. The goal is to find the absolutely most awful sports-based videa game that anyone has ever made. The criteria are as follows: the game must be listed under the "Games" tab on the app store AND under the "Sports" category on the "Games" tab. That's it.

The first game on the docket: Stickman Parkour.

This is what happens when you boot up Stickman Parkour. 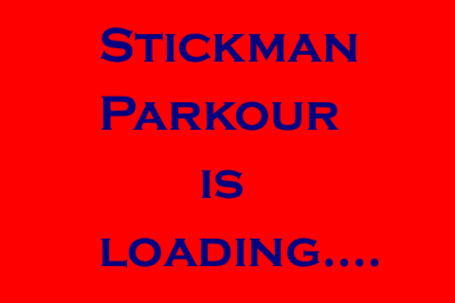 That screen is the best part of the game. It's hilarious and it tricks you into thinking something awesome is about to happen, like you're about to watch an episode of Botchamania or something.

Nothing awesome happens. You just get this. 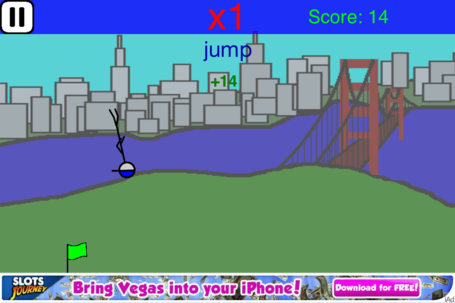 That's the most that this game makes sense. Because it doesn't make any god damn sense. You are supposed to tap the left side of the screen to "run," tap the right side of the screen to "jump" and while you're in the air, you're supposed to wiggle your finger around to make your guy do flips and shit. Oh, and because this is the "free" version, you get banner ads at the bottom that make the game stutter. Bring Vegas into your iPhone! No, you dumb ad, I can't do that. There's no room in there for that. I can't even play Stickman Parkour without it seizing up and you want me to cram "The Biggest Little City on Earth" in there? Get real.

So you select a "level," like "The Windy City" San Francisco, or "The Big Easy" New York City, and you're supposed to run across the level and do jumps and flips and maybe collect a star if you're lucky. But the levels are like five second long and there's actually no way to get air or do anything. The controls don't make any god damn sense, you can't like land on your head and break your crazy neck or anything, you just race inexorably toward the finish and maybe you jump and spin once before you get to hit "TRY AGAIN?"

Best restaurant I've ever eaten at. The food was exquisite and great value for the price. The wait staff was helpful but I think one time I went there, the hostess was chewing gum. I can't be certain she was, but that is completely unacceptable nonetheless. ONE STAR.

This is probably the worst game I've ever played. Also, when I boot it up, it makes my iPhone explode. Five stars.

I absolutely do not understand it.

One thing I do understand is that the titular Stickman is wearing a backwards baseball cap. That's what parkour is, y'all. Just a backwards-ass baseball cap and jumpin' up and flippin'.

This is the worst sports game app.