Share All sharing options for: Hey Guys, Let's Maybe Not Be Totally Gross.

In the wake of Friday's massacre in Colorado, a few hopeful stories emerged in the media. There was the fact that three of the 12 people who died lost their lives protecting their girlfriends from gunfire. The 13-year-old girl who stayed in the theater through the chaos to try and give CPR to an even younger victim. But then there was stuff like this CNN story, bylined to one Thom Patterson.

It's ostensibly about how James Holmes, the suspected gunman, bought a bunch of ammunition ahead of his rampage, but then, in what could only have been an attempt to push this disaster over 1,000 words (Thom Patterson gotta get paid), it turns into essentially a how-to article on getting the highest body count in your very own theater shooting. Here's the worst of it:

Howard said a crowded theater offers an ideal location for a gunman -- particularly one armed with a shotgun -- to target dozens of victims. A large room such as a theater -- where people are seated in rows -- makes moviegoers easy targets, even for an inexperienced shooter, [Michigan attorney and security and firearms expert Steven Howard] said.

A shotgun would do more damage among a tightly packed theater audience because its ammunition comes out of the weapon in a reverse funnel shape and would disperse across a wider area, according to Howard.

In a theater scenario, he said, "so many people's heads are lined up next to each other that if you fire down these rows of people ... one blast is going to kill or seriously injure 10 or 15 people, depending on a number of variables."

Cool. Great journalism, Thom Patterson. Really cool job calling up the first Google result for "guns and ammo expert" and then publishing every really troubling thing he says about how anyone looking to commit mass murder would do well to bring a shotgun into a movie theater. Really nice assist from CNN for actually running this grotesquery. But then this is the same outlet whose main story on the killings got the headline "Gunman turns 'Batman' screening into real-life 'horror film'." Heyyy guys, Dark Knight Rises? Not a horror film. Sooo the pithy little button you tried to put on your story to blow readers' minds doesn't even make sense.

The media has been full of stories like that since the first reports emerged from the Aurora massacre. This is the lead for the New York Daily News story I linked to above about the three men who died protecting their girlfriends: "Three survivors of the Colorado movie-theater massacre escaped with minor wounds, but were left with broken hearts because their heroic boyfriends died saving them." Whoa! How ironic! Incidentally, the URL for the story is http://www.nydailynews.com/news/national/aurora-shooting-died-bullets-sweeties-article-1.1119395 (emphasis mine).

There were plenty of other "chilling ironies" to go around, none of which were actually ironic. There was a theater shooting in the 1985 [sic] Batman comic The Dark Knight Returns! Is that where the killer got his dastardly idea?! One twist of fate that actually was chilling and cruel, if not ironic, was the fact that aspiring sports reporter Jessica Ghawi left the food court at Toronto's Eaton Centre mall just minutes before a gunman began raking it with bullets in June, only to be killed 1,500 miles away in Aurora a bit over a month later. But then the media got all gross about that too, as Piers Morgan pressed her shellshocked boyfriend for comment and she became the face of the killings, to the exclusion of the other 11 people who died that day.

But it isn't just the media that's been gross. There's this video, called "The Day Batman Cried" (!!!!!!!), and it's a slideshow of different pictures of people escaping the theater that night. It ends on an advertisement for the company that made it. Or, you might have seen this making the rounds on Facebook and Twitter:

Hey Facebook, I had an idea.......All those kids in the hospital recovering from gunshot wounds at the Batman massacre could use a visit from their hero. I propose we (as in all of facebook) should make enough noise asking Christian Bale to visit these kids in the Hospital dressed in the real Batman outfit. They need to know Heroes can be real too, not just the bad guys. Not asking anything fancy from you, if you read this, share it on your wall. If you wanna go the extra mile, post it on other sites as well. Show the kids there really are heroes.

Dear Christian Bale, Please visit the injured children from the Movie massacre as Batman, you have the power to be a Hero right now, not a movie Hero, a real life flesh and blood one. Thank you, Everyone

So the best thing we could do for people who barely escaped the massacre with their lives would be for a masked man in body armor to show up at their hospital beds by surprise? And it's the same character and actor they were watching when the carnage broke out and people began dying around them? This do-it-yourself PTSD kit has Gone Viral on Twitter with the hashtag #BaleOutAurora. So there's a pun involved too.

Speaking of puns, there's also this, almost certainly the most repugnant picture I've seen to emerge from the whole thing: 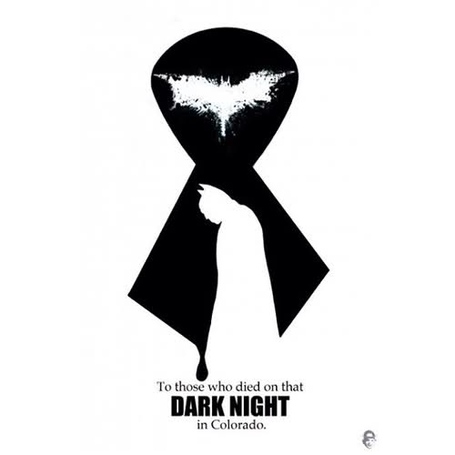 I've seen no shortage of crying Batmen, but this is the only image I've come across that combines two visual puns (the Batman logo and the Batman profile making the ribbon) and one actual pun in a single horror show of an image macro (an image macro!). And...is--is that a drop of blood coming off the ribbon?

I certainly don't mean to make light of what happened in Aurora. It was a horrific act, senseless and devastating for the families of the deceased, and it makes us all the poorer by bolstering America's fear culture with actual hard evidence. But if the best response you can muster is to scramble in the absence of new information for a story, any story, that will get clicks, or to propagate the most ghoulishly misguided Viral Campaign possible, or to make Photoshop puns about the whole thing, then maybe you should just opt for silence instead.