Advertising is weird. There are a lot of obviously awful commercials and advertisements, of course. But there is a special segment of commercials that, the longer you think about them, the less sense they make. This is one of those commercials.

A lot of companies feature shitty computer-generated pitchmen to shill their wares these days. General Insurance, Geico, Aflac, Carfax. The list goes on. But there is one company that is head-and-shoulders above(?) the rest when it comes to the sheer shittiness of what they're putting out. We're talking sub-Taiwanese animated news. Sub-Delgo. Sub-Birdemic. Sub-Sharktopus. Animation so awful that it just raises a million questions. I'm referring, of course, to Blue Tax.

Blue Tax has a whole slew of ads, but they are somewhat difficult to find in their unadulterated form on the Internet. Perhaps this is because they are horrifying terror machines of shitty animation. Here is a full ad and it should give you a great insight into what this company believes will entice you to call and pay for their service. 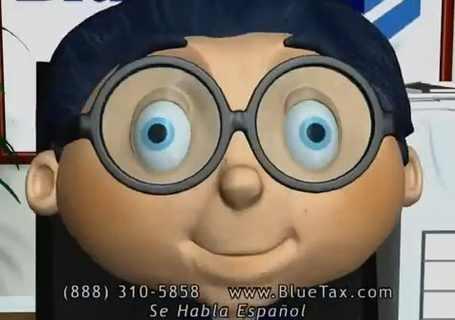 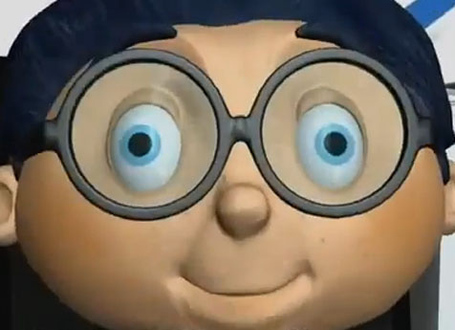 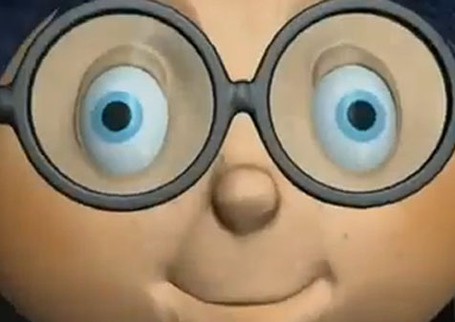 Blue Tax believes that their mascot, "Max," will convince you to call up and see how this crack team of professionals can save you money. You know what these commercials convince me? That this company is run by one guy in a studio apartment and a filthy shirt who downloaded a shareware text-to-animation program and dubbed in his own voice. I cannot believe that

Seriously, it costs a shit-ton of money to get commercials on the air. You're telling me they couldn't take $50 out of that budget to film a group of sad-looking jerks in an office? Did they not know anyone who owns a suit? Were they worried how much it would cost to print out an 11x14 piece of paper with TAX BILL printed on it? 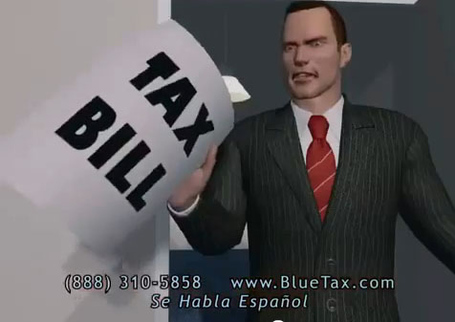 God damn it, look at this shit: 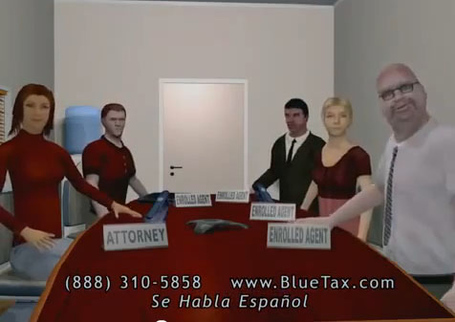 HOW DOES THIS CONVINCE PEOPLE TO DO ANYTHING, LET ALONE THINK YOU CAN GET THE IRS OFF THEIR BACKS

So this "The Sims"-on-a-circa-2000-Dell-quality animation can't draw people in, can it? The only things that I know for sure Max is capable of doing are terrifying babies and being strangely self-aware.

I think it speaks volumes that the only unedited version of this commercial on YouTube is not even listed with "Blue Tax" in the title. Instead, it is uploaded as "very creepy tax commercial." I couldn't have put it better myself.