Advertising is weird. There are a lot of obviously awful commercials and advertisements, of course. But there is a special segment of commercials that, the longer you think about them, the less sense they make. This is one of those commercials.

People from the South love sweet tea. They buy it by the gallon at Biscuitville and vacationing Southerners were so horrified that West Coast McDonald's locations didn't offer sweet tea that they organized a letter-writing campaign and succeeded.

One thing that people from the South don't like, however, is none of that fancy-pants fruity frou-frou bottled tea. "I GOT A JUG A TEABAGS OUT BACK A-SUN BAKIN'," they holler. "I AIN'T BOUT TA PAY NO TWO DOLLARS N CHANGE FER NO RASPBERRY POMEGRANATE HORSE PUCKEY."

Thankfully, the people at Lipton Iced Tea have found the Achilles heel for these potential customers. What good Southerner can resist the siren song of Grammy-winning, slavery-pining tunesmiths Lady Antebellum?

The Lipton/Lady Antebellum Synergy Spectacular (or LLASS) consists of two almost completely different ads, both of which are insanely fucking weird. The first such commercial involves the band members backstage (or more accurately understage, as they are all waiting to be lifted up through the floor of their stage a la a young Gangrel), complaining of the heat. They are refreshed by a delicious beverage and proceed to rock the house. This seems like pretty standard fare, right? NO JUST WATCH:

They're all hot (as evidenced by smoke, I guess? And two of the band member kinda-fanning (the lost Fanning sister) themselves and being like half-assedly WHEW IT'S HAWT Y'ALL), so Lady Antebellum lady asks for someone to pass her that Lipton Iced Tea (in her finest THIS IS MY FIRST TIME ACTIN Y'ALL delivery). The trio of bandmates thirstily consume the tea, which TURNS THEM INTO SENTIENT MOJITO-BEINGS and also apparently makes this lady super-smug: 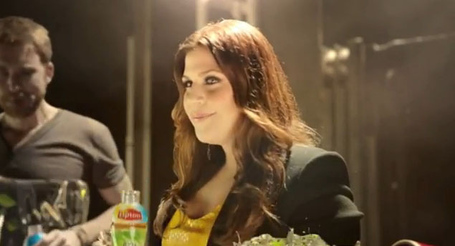 "THIS WAS A GOOOOOD IDEA, Y'ALL." /faaaaaaaaaaaaart

So they all rise up through the stage and play one of their rockin' songs and the crowd seems pretty happy to see Lady Antebellum, weird new see-through bodies and all. You're telling me they wouldn't even be a little put off by THIS? 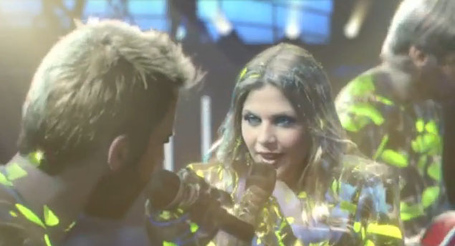 My favorite part of this commercial is that Silent Guitar Guy starts really gettin' into some Boyd Crowder-style boot-scootin' when the song fires up into FULL SHITKICKIN MODE: 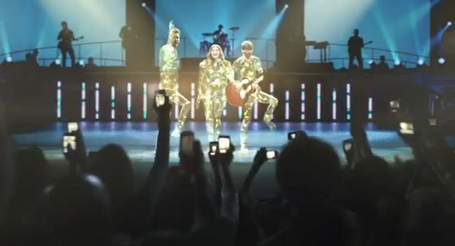 Also, wow, it must really suck ass to be the touring band for Lady Antebellum. The road band for Garth Brooks got to run around on stage in a theater-in-the-round setting and rappel from the ceiling and shit. Lady Antebellum's backing band has to be a half-mile away on top of the set of the Broadway version of "American Idiot."

But perhaps the weirdest part of this whole commercial (not really) is that, based on the very, very last shot of the commercial, we are led to believe that this massive liquid-person, Michael-Jackson-HIStory-tour-set concert is taking place INSIDE A TENT. 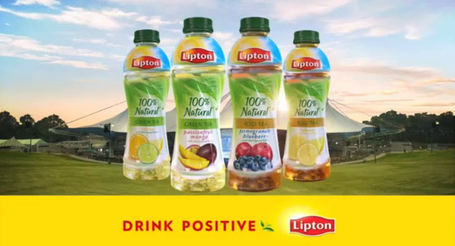 Oh yeah, just your average 100,000-person, pitch-black concert taking place down'to the State Fair, set up in the middle of the English countryside from the end of 28 Days Later. You know, your standard Lady Antebellum deal. Also, "Drink Positive"? I'm not sure what this has to do with either the tea or the Lady Antebellum-turning-into-Mutagen Man tent show.

But this isn't the extent of their ad campaign featuring Lady Antebellum, the trio of sweet crooners who love the era of blacks counting as three-fifths of a human being so much that they named their band after the golden age of Southern slavery. No, there's another ad featuring the band and boy howdy is it a doozy.

In this ad, the Lady Antebellum tour bus has broken down! Oh no! Literally the only thing tying these two ads together is that it's SO DURN HOT Y'ALL

The Antebellum-mobile has broken down. Due to, like, heat or whatever (again indicated by smoke and waving). 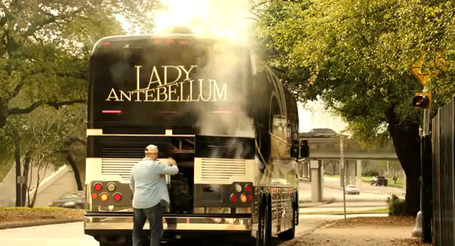 So it's a scorcher out there. Lady Antebellum herself (the woman in the band is supposed to be the titular Lady Antebellum, right? Admittedly, I don't actually know a lot about Lady Antebellum except for the fact that it's a quarter after one, she's a little drunk and she needs me now), gets a super smart idea! 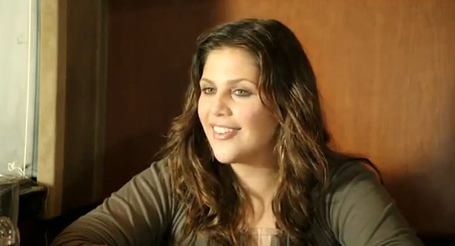 Her master plan is to pull some iced tea instant mix out of Alabama's Feels So Right album and make and drink said iced tea. 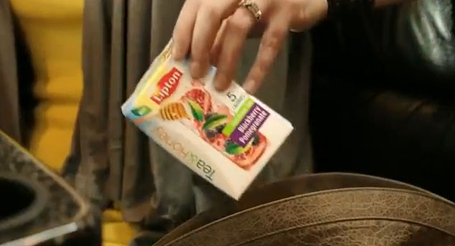 DIABOLICAL. The band, of course, really enjoys the refreshing iced tea, which -- being instant -- likely tastes like sub-Crystal Light hint-of-honey-flavored water. Also, supposing that the bus has broken down to such an extent that their air conditioning is out, it's unlikely that they're using any refrigerator-cold water (there's no ice in them glasses, y'all), so they're being "refreshed" by some room-temp-or-warmer powder-water. Lady Antebellum and Lady Antefella express their delight in the beverage, while Silent Guitar Guy can only quietly and sadly nod in (mock?) agreement. Seriously, watch this guy nod a few times after sipping his tastewater. It's heartbreaking. 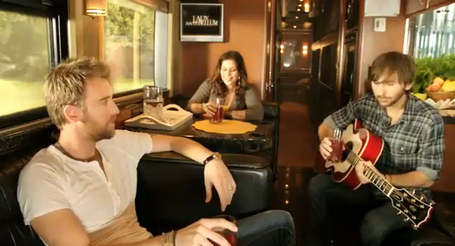 Now that these skinny-jeans-in-a-heatwave motherfuckers are suitably quenched by the instant mix, they disembark from their vehicle and walk into a nearby park, where Lady Antebellum walks up to a picnicking family and tosses some packets of the shit onto their blanket like it's manna from fucking heaven. 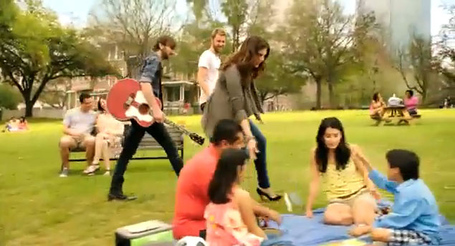 "Oh hey, instant tea mix to put in our jugs of water we don't have. Go fuck yourself, lady."

The family Antbellum then hops up onto a picnic table and starts serenading the jam-packed park with another one of their crowd-pleasing songs; one that causes the Lady Antebellum's face to do stuff like this: 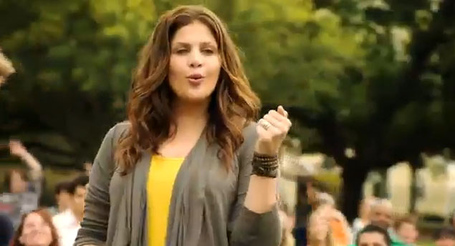 Oh man, check out the lady in the lower-left-hand corner there. That lady is ROCKING THE FUCK OUT to this middling adult contemporary jam. Shit, EVERYONE is rocking out. Look: 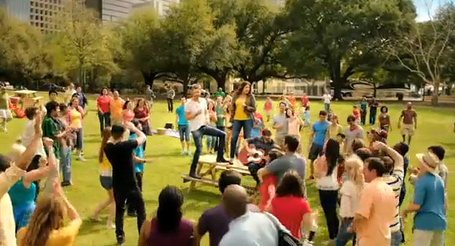 Nice try, Lady Antebellum, but this is still only the second-weirdest and second-most-rocking picnic in history.