The Search for the Most Unintentionally Funny Twitter Account is a new Progressive Boink feature that will scour the wilds of Twitter in a hunt for the Twitter feed with the highest humor to intended humor ratio.

Corporate Twitter accounts are never not completely stupid. The whole concept of a huge corporation having a Social Media Strategy is absurd, a seeming massive practical joke the young are playing on the old and out of touch. The corporate Twitter accounts that give out coupons or hold contests for free McMuffins or whatever, fair enough, but then you have Clorox begging people to retweet a Father's Day message with "the name of [their] favorite dad!" Or, check this shit out: 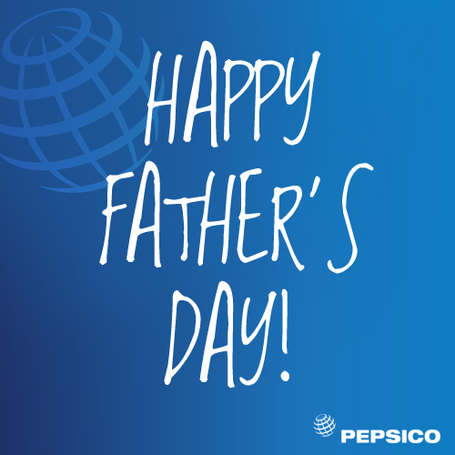 That's what @PepsiCo tweeted on Father's Day. Someone actually got paid to make that turd of an MS Paint composition and then toss it up on the Pepsi twitter account for...what reason, exactly? How is any sort of social media anything helping any brand, ever? The corporate ineptitude of the whole thing is hilarious. Even if all these companies are spending no money whatsoever on any of this by just tossing social media duties over to unpaid interns, it's still funny, because lol at the concept of someone applying for an internship at Subway.

So corporate social media is totally inane and inherently funny. "Cool," you're surely saying to yourself. "Article over, time to return to this Cracked.com list of the top seven most badassiest Supreme Court justices" or whatever the fuck. Except! You haven't seen Pizza Hut's Twitter feed yet.

@Swt_Ria we apologize for the way your food arrived. Plz go to pizzahut.com/phcares & provide us with the details & your contact info.

That's the most recent tweet from @pizzahut. The previous four tweets are also apologizing to customers over how shitty Pizza Hut is. It looks like they finally caught a break with the next newest tweet after those five, calling enthusiasm over an impending Pizza Hut order from @mommygoggles (brb having full-body grossout over the name "mommygoggles") "awesome," but then she actually got her order and it had no sauce and double cheese and the person manning @pizzahut had to apologize to her, too.

Out of the last 50 tweets from @pizzahut as of early Tuesday afternoon, 32 are apologies for how shitty people's Pizza Hut is. "This is UNACCEPTABLE!" is a common refrain, interrupted only by the occasional, "It's time to celebrate dear old Dad!" (what is it with these companies and Father's Day?)

All of these, by the way, have come in just the last few days. So if you follow Pizza Hut, you can expect your Twitter feed to be filled with hundreds of groveling apologies from a pizza intern to a disgruntled mob of people who are all about 15 minutes away from having explosive diarrhea. 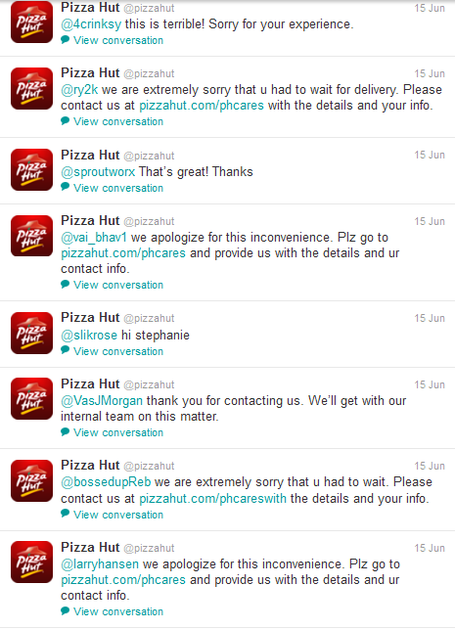 Pizza Hut, I nominate you as the first candidate for the Most Unintentionally Funny Twitter Account. Good luck facing off against the nominees yet to come. I truly apologize for any inconvenience this has caused.

@a_bitch_unique We are sorry your order arrived this way. Plz go to pizzahut.com/phcares w/ your contact & local store info. We'll follow up