Don't vote. It's complicated and you're going to mess it up.

There are plenty of reasons not to vote Tuesday. Here are a dozen.

Share All sharing options for: Don't vote. It's complicated and you're going to mess it up.

1. The impact of your vote is negligible. It only counts for one percent of the overall vote. If you had like 75 friends, you and your friends could decide the election, but you do not have that many friends. People with that many friends generally have better things to do than voting.

2. If you live in a swing state, it's either really cold or really weird outside.

3. You don't have anything nice to wear to the polling place. You're going to look stupid.

4. Everyone on the ballot is probably an asshole.

5. If you skip work to go vote, your employer can legally fire you.

6. Polling places are often set up in fire stations, where firefighters are trying to sleep and do their job and save your home if it catches on fire. It would take a lot of nerve for you to loiter around in their fire station and get all up in their shit like that. They're going to be nice about it, but God they hate it so much.

7. While in line to vote, you might meet someone you hate running into, and it will be in a scenario that's most likely to involve political conversation. This is going to be terrible.

8. The ballot is complicated. It's been years since you voted, and you're not going to know what to do. Here is a sample ballot: 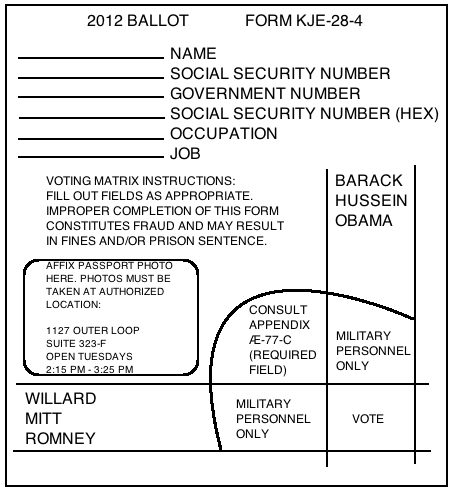 9. If the polling place has private booths, this will be awful because nobody will be able to help you figure out how to fill it out. If you fill it out incorrectly, you risk jamming the vote counting machine and negating the votes of hundreds of other people.

10. If the polling place does not have private booths, everyone in line, and everyone who works there, is going to stare at you while you nervously fiddle with the ballot. When it becomes apparent that you don't know what you're doing, people in line are going to start shouting things like, "Come on! Hurry up!" Soon, everyone in line will be saying that very loudly. The poll workers will say things like, "you're a grown adult, why don't you know how to fill out a simple ballot?" One of the workers will wave your ballot in the air and say, "Remember to punch out columns A-3 through ZA-17-b only! Don't do what this knucklehead did! Use the multiplier columns!"

11. You need to bring your birth certificate to vote. It's at your mom's house in Iowa. You really should have been thinking about this weeks ago. Did you really think you could simply roll out of bed and vote? Why don't you have immediate possession of your most critical documents? How old are you?

12. Frankly, I don't have any confidence in you.