The 1990s were the decade that spawned a million lowbrow T-shirts. Here are a few of them.

The 1990s was an awful decade full of awful clothing decisions. The 90s spawned the worst T-shirt franchises of all time, full of terrible and instantly-recognizable icons of terrible taste. Icons that ranged from glaring eyes to exceedingly large canines. This is just one of the T-shirt lines from that forgotten era.

T-shirts were already a fully-ingrained aspect of American society by the 1990s, of course, but at some point in that decade, several companies appeared to discover double-entendre all at once and conspired to put the most overt and laziest of those vaguely sexual-sounding slogans on shabbily-manufactured shirts and sell the for $20-$25 a pop at any mall storefont where you could also buy a man that attaches to your car window with suction cups and drops his pants when you squeeze a bulb.

One of these ubiquitous lines that revolved around the high concept of "hey that sounds like a sex thing kinda" was the "Coed Naked" line. These were apparently made by "Gottahave Sports" and they pumped out over a dozen varying categories. Coed Naked Baseball. Coed Naked Firefighting. Coed Naked Nursing. Coed Naked Cheerleading.

But in this installment of Awful 1990s T-Shirt Repository, we'll be taking a look at perhaps the strangest of them all: Coed Naked Soccer.

For reasons unknown to anyone, ever, Gottahave has collected the retired designs of Coed Naked shirt franchise in a "Hall of Fame." Each design is accompanied by some vital information, just like you'd expect from any Hall of Fame! We'll kick off this inaugural edition of the Awful 1990s T-Shirt Repository with the Coed Naked Soccer Hall of Fame, featuring some of the saddest and laziest double-entendres paired with the most easily-accessible clip art the company had available at the time. Please keep in mind that people paid money for these shirts, then wore them. In public. What a fucked-up decade that was.

(The Coed Naked Hall of Fame was brought to our attention by way of Dan McQuade and Robert B. Wheel)

Coed Naked Soccer
Saying - Get Your Kicks On The Grass!
This soccer shirt was the first style available for sale at gottahave.com in 1995.
It was replaced in the spring of 1996.
We are not sure what preceeded it since our records only go back to 1965.

That is a long time for the "GottaHave.com" records to cover! Wow! One can only imagine the shirts that Gottahave Sports pumped out in 1965. Blazers with pictures of wieners on them? We'll never know. Under Gottahave finally unseals those records, I guess.

Anyway, this was the original Coed Naked Soccer shirt. Shirt Prime. Since 1995 was still the dark ages of double-entendre on T-shirts, the tagline (or, uh, "Saying," as Gottahave describes it) is relatively innocuous. Get your kicks on the grass! It's like something that Reggie would say to Archie if Archie were planning a picnic in a field with Betty. In these early days, I guess they felt "Coed Naked Soccer" was daring enough. Anything else was just icing on the scumbag cake. Kids still had to convince their parents to buy them so they could wear them to junior high, after all.

Please note that the overall design of the graphic on this one is basically exactly what you'd expect to see on the cover of a book at B. Dalton Bookseller entitled Learning About "America On-Line" and the Wild World of the World Wide Web!"

Coed Naked Soccer
Saying - Go Hard For 90 Minutes!
This soccer shirt was introduced in the spring of 1996.
It was replaced in the fall of 1997.

Whoa hey now we're getting pretty graphic here. As is the custom with nearly all shirts of this time, the double-entende of the "Saying" doesn't actually make sense, even in a sexual way. You imagine that what they REALLY wanted to say was like "Get hard and have sex for 90 minutes" or "Partake in intercourse for a duration of time comparable to a regulation soccer game!" or perhaps "Refrain from ejaculating for what seems like an impressive amount of time" but this was as catchy and just-naughty-enough as they could muster.

I'm really wondering who was in the stock photograph that formed the basis for the art on this one. I hope one day he was walking through a mall and saw this and recognized himself. I hope he did a double-take, read the shirt, and then just went, "Aw, man." 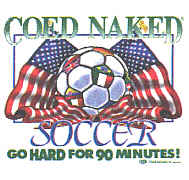 Coed Naked Soccer
Saying - Go Hard For 90 Minutes!
This soccer shirt was first available for sale in the spring of 1997.
This shirt design lasted until the fall of 1997.

Whoa hey a redesign! This time they emphasized HARD and 90 so they made sure you got it. Please note that from the very beginning, "Coed Naked" was a registered trademark. I hope the copyright clerk gave the guy a disapproving look from over her glasses as she rubber-stamped the paperwork. I'm also hoping whoever founded Coed Naked was the Joe Francis of the 90s. Wait, I guess that would be Joe Francis.

This appears to be the first non-clip-art design for the line, but they were still just going with a random font for "Soccer." I'm guessing this font was named "English Script" or something, because soccer. 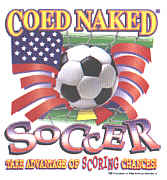 Coed Naked Soccer
Saying - Take Advantage Of Scoring Chances!
This soccer shirt was introduced in the fall of 1997.
It was replaced in Summer of 1999.

Whoa hey now the word "Soccer" is gettin CRAY ZAY y'all. Please note that the last two designs really emphasize that this is AMERICA you're dealing with, because when you're making allusions to all the sex you'd like to have on your T-shirt, you're a pretty specific demographic. They sell American-flag Truck Nutz, right? They must. THESE NOVELTY TESTICLES DON'T RUN

You should take advantage of SCORING chances, you guys. Get it? Because you probably don't get a lot of opportunities for sexual congress. I give Coed Naked a lot of credit for this one, because it's a terrible innuendo AND a pretty significant jab at the person who's buying this shirt. "HEY VIRGIN, BUY THIS SHIRT!" 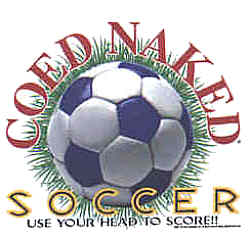 Coed Naked Soccer
Saying - Use Your Head To Score!
This soccer shirt was first available for sale in the summer of 1999.
This shirt design lasted until the fall of 2002.

"Use your head to score."

THIS SHIRT DESIGN LASTED UNTIL THE FALL OF 2002. People were buying this shirt until well past 9/11. And it doesn't even make sense! Use your glans penis to score? Is that what they're getting at, here? Are they advocating for you to give oral sex? I don't believe they are! We don't really want to mention it, but we kind of have to, but that soccer ball and placement of grass is attempting to evoke a wide-open vagina, right? USE YOUR HEAD TO SCORE, EVERYONE! Right in here.

"We're making sure the connection to soccer is only tenuous at best. There's no substance here." I'm imagining a full factory of dead-eyed drones running these shirts through the silkscreen process, checking for imperfections, probably smoking and wearing one of the Coed Naked retired designs themselves. We started a war with Afghanistan and people were still buying shirts that said "use your head to score."

Coed Naked Soccer
Saying - Get Your Kicks On The Grass!
This shirt design was introduced in the Fall of 2002 and discontinued in the Winter of 2005

And so, like Ouroboros eating his own tail, we end where we began. A new design and a barely-legible "est. 1986" is added, but it's the same shirt they used to kick off the line (soccer term). Coed Naked Soccer ran out of ideas after just four shirts. That's all the sexual euphemisms they could think of based on people playing naked soccer. Let me see if I can think of some real quick.

- Prove you're a keeper!

- Blow them away with your ball handling skills!

- No penalties for hand balls

- perform a bicycle kick with your penis

Okay, now I just feel dirty. Rest in peace, Coed Naked Soccer. Unless a new version of you is still being made. I haven't been in a Spencer's Gifts in years, so someone else will have to conduct that field research.