The Most Watchable Movie Bracket: The Final Four.

Share All sharing options for: The Most Watchable Movie Bracket: The Final Four.

For those of you who have been following this since day one, you may have noticed that last week was a bye week. What can I say? I was busy making binders full of women/killing Big Bird/buying Lucasfilm Ltd./being Donald Trump. Haha lol! Gotta love that topical humor. But seriously, wasn't Hurricane Sandy a tragedy? So sad... Onto the bracket: 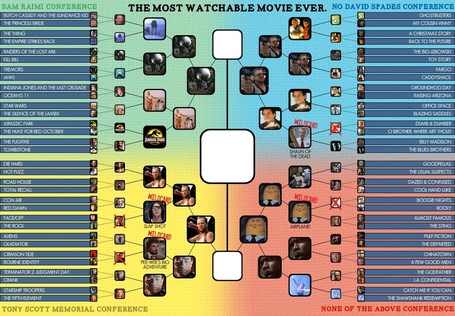 At least one surprise: Airplane!, a large collection of puns, snatched victory from the jaws of defeat, beating Pulp Fiction by a margin of two votes. While this is a travesty that shall not soon be forgotten nor forgiven, it did give us a tidy Final Four: We have an action-adventure film going up against a comedy in both sets of voting this week. There may be those of you who feel that the action-adventure and comedy movies should instead be paired together, but I believe that together we will find that this makes for a more interesting, less predictable path to the final two. Also it would've been a huge pain in the ass to move the conferences around. Anyway!

Voting will run a bit longer than usual. You have until the evening of Monday, November 5, to make your voice be heard. And the turnaround on this one is going to be rapid. That's right: on Election Day, Tuesday, November the 6th, Two-thousand-and-twelve, we as a nation will not only decide who will lead our country for these next four years, but we will also determine once and for all which movie will reign o'er them all as...the most watchable movie of all time.

Continue on to the penultimate round of voting.