Jon, as your friend I felt compelled to share with you some thoughts about your latest endeavor, the End Zone Bar & Grill.

Slavoj Žižek has a long screed where he decries late-model capitalism displaying "first as tragedy, then as farce." I had long taken it as so much bloviating until I saw your End Zone Bar & Grill menu, at which point it all came clear. If you packed an Applebee's in salt and baked it for a few hours, upon cracking open the result there would emerge a short bleat, and a vision of tepid, cowardly food. 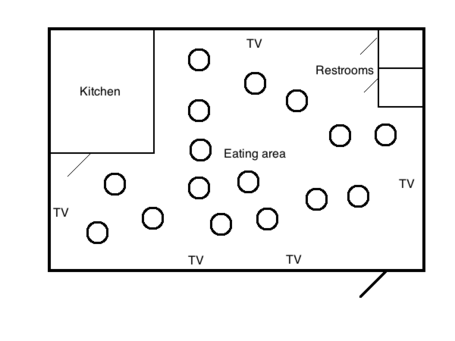 Before I get to the food, though, I would like to note that I actually like the floor plan. I really like it. I can already hear the sighs of relief given when people walk in the door and realize they won't need to look their companion in the eyes, and they can get through another night of spitting awkward questions into the ether, and when word comes back from the void that no, Stacey didn't say she misses you, well you just pretend you didn't hear it. Keep your eyes locked on Woody Paige. He's got something real good on the chalkboard today, did you see it? Keep looking, they'll switch back to him soon.

I want to tell you about two people I know. They're down at the bar on Sundays. One of them has a longshoreman's mustache and a backpack full of bus schedules, and every Sunday he draws forth his notebook and resumes taking notes where he left off the previous week. He doesn't play fantasy football, he's just keeping track, and there are some really interesting in-game trends he can show you. The second guy wears the same track suit every week and has a pair of those headphones that have the radio built right in, and every week you can see this model of efficiency move around the bar, glad handing each celebrating group of fans as fortune shifts their way, comforting those whom luck has deserted. You have to speak up when you talk back to him, those headphones aren't just for show.

The End Zone Bar & Grill seems built just for them. When they're halfway through their pitcher of one of the kinds of Sam Adams (the good kind, not that one that's all dark and shit), that's when the End Zone pulls the old "Double reverse!" The restrooms are almost perfectly cordoned off by a row of tables, a veritable Maginot line of little plastic cups full of ranch. And those tables can easily be occupied by my friend the statistician, or FM Jones, and they can just wait right there until every person in that bar has come to them. 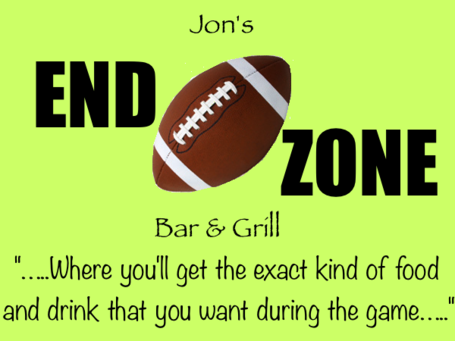 Without knowing what the final slogan will be, I can't say too much about the sign. I admire the courage in using that many fonts, though, and I think you're going to find the graphic-designer-who-has-pulled-off-the-road-in-rage business to be rather brisk. 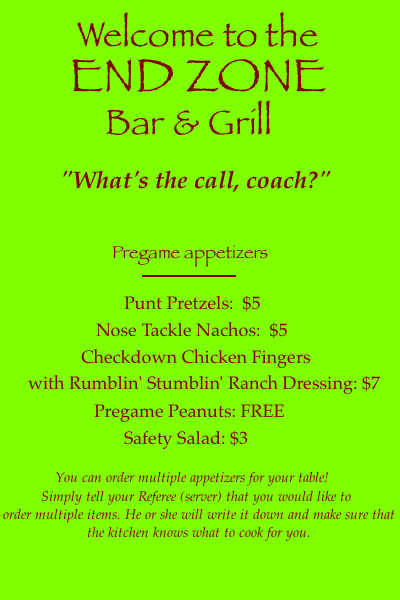 And finally, the food. Jon, the food. What is it like, Jon, what is it like to have all of Guy Fieri's lack of taste, but none of his courage? I imagine it is a cold place, with only kickoff ketchup to console yourself. It is rare that reading something can provoke so physical a reaction, but between the punt pretzels, the nose tackle nachos, the rumblin' stumblin ranch chicken fingers, the tight end tacos ... I ended up so parched I was in need of an intravenous drip. "Drown your sorrows in salt" wasn't an option in the slogan poll, but I'm hoping you'll allow me a write-in.

Best of luck with your endeavor, Jon.