The Most Watchable Movie Bracket: The Elite Eight.

Share All sharing options for: The Most Watchable Movie Bracket: The Elite Eight.

You monsters are all dead to me. Airplane! knocked GoodFellas out of the tournament. Just...ugh, whatever, here's the bracket: 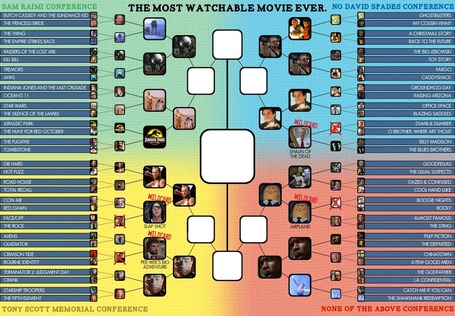 The last round had a few extremely close matches, including Raiders of the Lost Ark vs. The Empire Strikes Back. Raiders bested Empire by precisely one vote (108 to 107). One! The wildcards did not fare quite as well, however, with only one advancing and the other three losing in the largest landslides of the round. Hopefully, though, all the choices this time around will be even more agonizing. These last few rounds will all take place on Friday, so mark your calendars.

In the meantime, let's get it started (in here).