On September 9th, 2003, Jon, Brandon, Nick and Justin launched Progressive Boink. It was a crappy site and they all shut it down to join baseball teams/the Army. Just kidding! Here is a sappy article about it.

Ten years ago tonight, Progressive Boink went live for the first time, and it looked something similar to this. 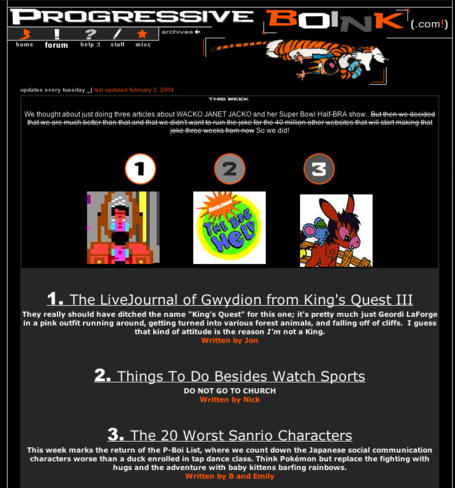 We decided to update the site on Tuesday, September 9th, 2003, and every Tuesday thereafter, because 24 aired Tuesday nights and 24 night was terribly special to us. Between Brandon, Nick, Emily, Justin and myself, we'd run three articles each week about any damn thing we felt like writing about.

I want to stop for a moment and outline exactly where I was in life in September of 2003. I was 20 years old, and the idea of going to college was beginning to permanently slip away. I didn't care that I had zero plans for the future, and didn't really even mind much that my job at RadioShack produced $1000 a month if I was lucky. I lived on my own and had cheap stupid fun, and that was good enough for me.

That cheap stupid fun included killing lots of time on the Internet. I found Whatever-Dude.com, where Brandon wrote about wrestling and video games and whatever else he felt like, and then I kept reading and reading until I'd read every article of his that I could find. Nobody else on the Internet was writing like this dude. I kind of wanted to write online somewhere, and upon finding B, I really wanted to. We talked for a while, made millions of dumb jokes about old NBA players, and then decided we would launch Progressive Boink. (That name, which Nick came up with, is a nod to Calvin & Hobbes, the comic strip that remains pretty much my favorite thing in the world.)

I did want to write online for a living -- and God, in the worst possible way -- but in 2003, almost nobody working independently really knew how to do that. Man, I just wanted to write. The Internet was young, and new, and afforded us the opportunity to do whatever they wanted and make it look however we wanted. Even at the time, I remember feeling really lucky to have been there, then. There was no excuse not to fly off the handle and do all kinds of fun, silly, outrageous, ridiculous bullshit.

We did. When B or Nick or Emily did something, I'd love it, and then I'd turn around and try to put together something to match it. We were constantly pushing each other to create the wildest shit we possibly could. Readers in the forums were part of it, too, to the extent that the "staff" and "reader" lines kind of disappeared. We were just a big community of knuckleheads, hanging out and making each other laugh. That's how we met Bill, Mike, Kyle, Pete, Lindy, and Hanstock, each of whom later joined the site as writers.

It didn't feel like work, but we worked our asses off. I'd get home from my job, stay up all night working on a post, and go to work the next morning without having slept. I just didn't want to stop, not for the sake of achieving some sort of dream career through means I couldn't even imagine, but because I decided: this is me, forever.

You're not asking for my advice, but if you did ask me how to write for a living, I'd tell you to obsess over what you're doing, work your ass off, do that for years without ever stopping. Challenge yourself to come up with something nobody else is doing. Surround yourself with the best, most talented people you can, and then y'all make sure to challenge each other and keep each other accountable. "Work your ass off" deserves additional emphasis here. If you do all that, you can put yourself in a place to be there in the, I don't know, 10 percent chance an opportunity comes by to start getting paid in a meaningful way.

It took me years -- actually, nearly six years on the dot -- before I joined SB Nation and started writing for gainful employment. I write alongside Bill Hanstock, and Pete has written here too. Brandon runs the ship over at the blog With Leather, which he's turned into a giant wrestling/sports death robot.

I have my dream job, and I fully recognize it's a wonder I even got here. If Progressive Boink didn't happen, I have no idea of what I'd be doing, but it wouldn't be this. I'm really proud of what I did to get myself here, and I have to credit metric tons to the people I spent so many years writing alongside, but I have all y'all to thank for so much of this.

Before it was separated from its mother, was chased down in the prairie, and had its flesh ripped from its bones by new-media types, the idea of "creating a conversation" and "forming a relationship" with readers was a really, really important one I stumbled upon in the early years of Progressive Boink. I went into it with the idea that I'd bang away like some sort of newspaper columnist, people would say "great job," and that would be it. It's still kind of like that, since I'm up here and all you assholes have to speak your piece in the comments below, but man. You -- the people who did and do read my stuff -- cackle at stuff with me, you say nice things, and you encourage me. It's a communal kind of experience, ideally, and I'm just happy that you seem to have as much fun as I do.

I'm so damn lucky for all of this. Thanks, y'all. Love you.