The Most Watchable Movie Bracket, Round Two: Action and Adventure.

Share All sharing options for: The Most Watchable Movie Bracket, Round Two: Action and Adventure.

When we left off, y'all were voting to narrow down the field of watchable movies from 64 to 32. Now, we're going to vote to whittle these down to a Sweet 16. Next week, you may find some shakeups before we reach an Elite 8. Be prepared. In the meantime, the bracket, as it currently stands: 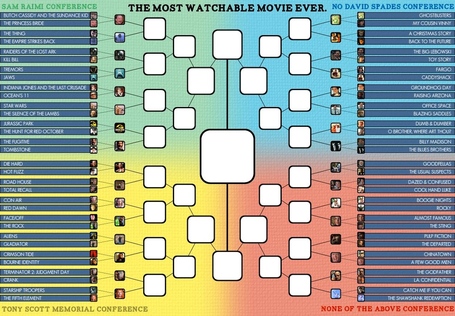 ...which was the result of the following victories, in the order in which they were originally seeded, in the adventure/horror Sam Raimi Conference and the action Tony Scott Memorial Conference:

A few things to note before voting begins:

In the Tony Scott Memorial Conference, meanwhile, Terminator 2's 341-to-75 (82% to 18%) victory over Crank was the largest landslide, while the closest vote was between The Fifth Element and Starship Troopers. The former film beat the latter 215 to 200 (52% to 48%). Die Hard received the most votes overall, with 394.