The Most Watchable Movie Bracket: Round One Revealed.

Share All sharing options for: The Most Watchable Movie Bracket: Round One Revealed.

Well hot damn, folks. Evidently y'all like watching movies. Between the comments on two posts and a (smaller) spate of tweets, I ended up losing count of how many nominations we had, though the final number was somewhere north of 200, across 521 comments and at least 30 tweets.

It was not easy whittling them down to a bracket of 64. Some decisions came swiftly--for example, avoiding The Boondock Saints as though it were a human turd sitting on a white carpet, which it basically is; it is only watchable to college freshmen named Travis or Braylen. Other decisions were more painful, like dropping The Godfather Part II, even though I personally find it a bit more watchable than the first movie. Interestingly, we ended up with more comedy films in the nominations than any other one genre, which came as a surprise to me; I had expected action and adventure to dominate, but those genres were far outnumbered by comedy and drama. Also of note: the Coen brothers were the most dominant creative force, trailed by George Lucas, whose influence on the relevant movies was more diffuse, only having served as solo writer/director on one of four first-round movies on which he had some form of creative input.

In the end, the list was determined using three primary factors: commenter enthusiasm, in the form of both rigorous defense and multiple commenters chiming in to support a nomination; popular and critical appeal, the most minor factor, but employed to eliminate "so-bad-it's-good" considerations and selections like The Goonies plagued by a cloud of nostalgia; and my own judgment. Seeding the bracket was accomplished based on the same criteria.

Ultimately, I established four conferences of 16 movies apiece, united by genre or other considerations. Note that if community consensus finds that there are any glaring omissions that either failed to be nominated or failed to make the cut for round one, there may possibly be opportunities for wild card entries later in the tournament. Without further ado, here are the initial 64 movies in the Most Watchable Movie tournament, ranked by seed:

The Sam Raimi Conference: A Slapdash Mix of Adventure and Horror
Butch Cassidy and the Sundance Kid
Indiana Jones and the Last Crusade
Jurassic Park
Raiders of the Lost Ark
Jaws
Tombstone
The Silence of the Lambs
The Empire Strikes Back
The Thing
Star Wars
The Fugitive
Tremors
Kill Bill
The Hunt for Red October
Ocean's 11
The Princess Bride

The All That Is Required for Joe Dirt to Win Is That Good Men Do Nothing Conference: Comedies Not Starring David Spade
Ghostbusters
Groundhog Day
Dumb & Dumber
The Big Lebowski
Caddyshack
The Blues Brothers
Blazing Saddles
Back to the Future
A Christmas Story
Office Space
Billy Madison
Fargo
Toy Story
O Brother, Where Art Thou?
Raising Arizona
My Cousin Vinny

The None of The Above Conference: Bildungsromans, Picaresques, and Other Story Structures You Learn About in Intro to Western Literature
GoodFellas
Pulp Fiction
The Godfather
Boogie Nights
The Sting
The Shawshank Redemption
A Few Good Men
Cool Hand Luke
Dazed & Confused
Chinatown
Catch Me If You Can
Almost Famous
Rocky
L.A. Confidential
The Departed
The Usual Suspects 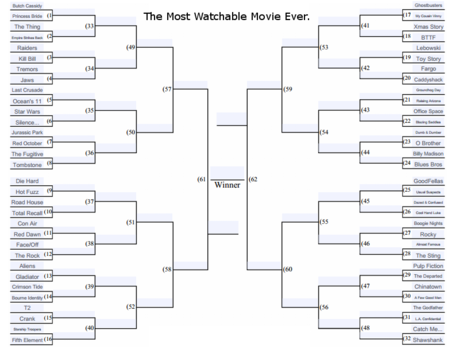 Initial polls to begin determining round one winners will start tomorrow, so watch this space, fill out your bracket if you want to play along at home, and remember to Rap The Vote!