Pragmatic Futurist Bookie: How Will The NFL End?

Share All sharing options for: Pragmatic Futurist Bookie: How Will The NFL End?

In either case, here are some possible scenarios I can think of, as well as some odds. This, as you might guess, is as much about America and the human race as it is about the NFL.

The Global Catastrophic Risk Survey, conducted at Oxford University in 2008, estimated a 19 percent chance of human extinction by the year 2100 -- most likely by nanotech weapons, a world war, or an engineered pandemic. With such a large scope, and with so many unknowns, I find it difficult to place much confidence in this figure. We'll roll with it anyway.

For lack of better understanding, let's suppose this 20 percent likelihood of human extinction remains constant throughout the remainder of human history. I think we ought to agree that all other possibilities that would lead to the NFL's end -- societal changes, etc. -- grow more probable as more time passes: 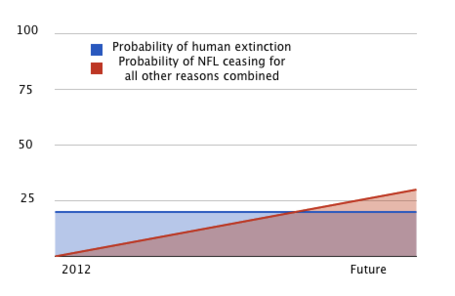 The idea of the NFL ending in the year 2013 for any reason other than human extinction or the collapse of our civilization are very, very low. But at some point in the future, those other factors will have had enough time to develop so that they're more likely to bring about an end to the NFL. When will we reach that point? 2050? 2200? It's difficult to say.

Were American society to collapse, it would be just as sure to destroy the NFL as human extinction. It's certainly more likely to occur.

I don't believe that the present-day United States are in any real danger of collapsing, but human history is littered with the ghosts of fallen empires. Our world is certainly different than those of the Roman or Byzantine empires, and since humankind has only been developing civilizations for 15,000 years or so, we have a very limited sample size to pull from.

It could be argued, however, that time is "moving faster," so to speak, in the present day. For example, it took us over 2,000 years to evolve from the iron sword to the pistol. It took us about 1/15th that much time to progress from the railroad to landing on the Moon. As developments move faster, so do the systems that could bring about societal collapse, and new systems are born all the time.

Today NFL is arguably America's primary cultural institution. Indeed, one might have to take a wrecking ball to the latter to end the former.

Over the last couple of years, during which concern over player health has reached a fever pitch, I've heard an occasional fringe opinion pop up here and there: that the American government might eventually outlaw football.

I find it far more likely (though still unlikely) that the government would step in and heavily regulate the league in an effort to make it safer ... but we should remember that this has almost happened before. In 1905, the year 18 football players died on the field, President Theodore Roosevelt threatened to ban organized football entirely unless sweeping changes were made.

The greatest danger is a dramatic turnabout in public sentiment. We've seen how swift and powerful the teetotalism movement and "Red Scare" were, and how capable they were of altering laws and policies.

At this point in history, it's very difficult to imagine the NFL going belly-up. In the 1990s, the already-popular league experienced a meteoric climb in popularity. It's enormously profitable.

Again, though: empires fall. Boxing has fallen hard over the last 20 years or so. Then again, boxing doesn't have the massive overhead the NFL does. If something dramatic happens, whatever it may be, that causes public interest in the league to decline, they're suddenly left with cavernous stadiums to fill, players to pay, ads to sell, and all sorts of other things, and if they couldn't scale back rapidly enough, the NFL could fold.

Perhaps game-fixing is uncovered and the game loses so much integrity that NFL fans leave en masse. Maybe a competitor finally emerges and succeeds where the USFL and Arena Football League failed, and runs the NFL out of business. Or maybe a yet-to-be invented sport captures the public interest so overwhelmingly that interest in the NFL withers and dies.

None of those scenarios seem especially likely, but all are entirely possible.

Evolves into an entirely separate entity - 9:1

It's very difficult to imagine what else the NFL would evolve into. Perhaps, after accumulated a few centuries' worth of resources, clout, and influence, the NFL becomes a political movement, or buys a chunk of land and becomes its own sovereign nation. Eventually, their biggest fish to fry are 20 times more important than their football game, so they phase it out.

Football is no longer interesting to an elevated society - 9:1

Football fascinates us for now, but a shinier, more interesting toy is bound to come around eventually. As I said above, I think time is, in a sense, moving more quickly than it used to, and it figures to only pick up more speed.

They don't play football in Star Trek, is all I'm saying.

There are probably many strong possibilities I didn't account for. If you can think of any, please say so.