Share All sharing options for: Revisiting The 2002 RadioShack Catalog, Part 3.

And now for the conclusion of our sojourn through the 2002 RadioShack product catalog. (If you missed them, Part 1 is here, and Part 2 is here.)

In this section, we'll finally get to the remote-control cars, which is the only reason most of us would even flip through one of these catalogs to begin with. Get ready for the Aggressor, Mauler, Violator, Mangler, Deceiver, and other toy cars named after mortal sins! 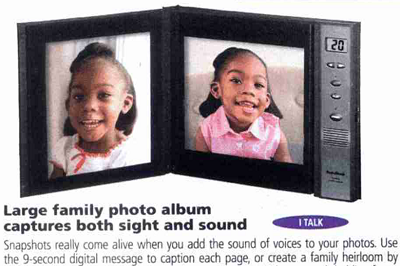 We had a few of these "talking picture frames" on display, so that customers could push the button and hear whatever inane shit we -- or a bored customer -- pre-recorded into them. One time, a couple of kids went through this album -- which let you record up to 20 nine-second messages -- and took turns battle-rapping into them. "We're gonna sell 100 of these things for y'all," they told. "Y'all gotta give us a cut." And honestly, their rhymes weren't bad, either. It was awesome.

We managed to preserve the recordings for about a week until our manager got wise to them. The store I worked at, being a mall store, experienced such dramatic sales swings that incoming managers lasted only a couple months before desperately trying to get transferred away to another store.

Except for this manager. Let's call him Frank, I guess. Frank was the square-est square I have ever met in my life. He didn't listen to music He had no hobbies, or favorite television shows, or opinions about anything at all. Having a conversation with him about anything other than sales numbers was completely impossible. He was cold, robotic, and thoroughly unlikable.

When Frank found out about these five or so battle-rap recordings, not only did he erase them all, he recorded a hilariously earnest and hokey sales pitch over each one. "Thanks for visiting RadioShack," he recorded without inflection. "This talking picture album is a terrific gift for your friends and family." Frank was the worst. THE FREAKING WORST. 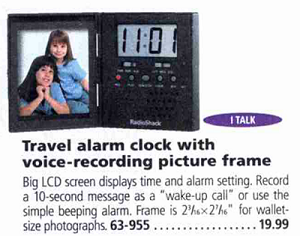 And this brings us to a co-worker of mine I'll call Ed. He was in his late 40s, sort of heavyset, and an unbelievable creep. He'd ogle at teenage girls walking through the mall and say awful shit that, thankfully, I have managed to forget. He was DadBoner in real life, is what I'm saying.

Ed was perfectly content with never ever doing any work. A couple times a day, he would announce that he had to "take [his] medicine," walk out to his car, and get stoned. When he came back, he would walk over to the Casio display keyboard and just start banging away on the keys for 10 minutes. He certainly wasn't making music. He just liked to make a racket.

Eventually, we installed a remote switch on the power outlet. I kept the remote in my pocket, so whenever he started one of his stoner jam seshes, I'd switch it off from across the store. He never knew it was me. "Yeah, man, weird. Don't know what happened."

Anyway. One day, as Ed clocks out and leaves for the day, he says, "hey, listen, pal. I recorded new messages on all the picture frames. Hope you get a kick out of 'em." I'm busy with a customer, and I forget about this until a couple hours later, when an old lady picks one of them up and presses the "play" button:

"QUIT FINGERIN' THE GODDAMNED MERCHANDISE AND MAKE A FUCKING PURCHASE!"

This old lady was so startled that she almost dropped the thing. I was laughing so hard that it took me half a minute to get a proper apology across. That was the only thing worthwhile thing Ed accomplished during his entire three months or so as a RadioShack employee, but man, it was a home run. 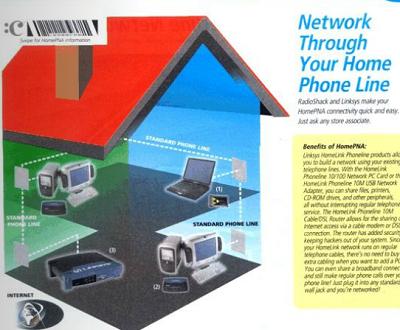 For a few years there, we were all in home network purgatory. Y'all remember that shit? We couldn't figure out whether to tear up our walls and run Ethernet cables through the entire house, or try to jury-rig the connection through our old phone jacks, or try to send the signal through our power outlets. And our computers ran Windows ME, the most God-awful OS of all time, so it took an eternity of trial-and-error to tweak every little setting just to get it to work. Guh.

It was a valiant effort to squeeze some sort of utility out of those phone lines, though. There are hundreds of thousands of miles of telephone cords running through our homes, and these days we use them for absolutely nothing.

Which fits perfectly into my dystopian-future scenario, in which either the government or some omnipotent corporation controls and monitors all Internet activity. Emails are censored, free speech is compromised, the whole bit. We're unable to fight back on the software end, so we utilize these ancient old phone jacks to access an "underground Internet" of sorts. 2800 bauds of freedom, y'all.

Also, everything Linksys has ever made is a total pile of shit.

Alright, just a little mushy sentimental shit and then I'll get to the remote-control cars. Promise. 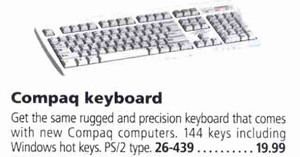 I still have this keyboard.

I used it from 2002 to around 2007. It's dirty from years of coffee stains, it's missing a few keys, and in the corner you can still see where an ex-girlfriend of mine scribbled on it.

I made two important realizations in early 2002. The first was that my goal of writing for a living, which I'd had since the age of 11 but had since ditched in the interests of engineering school, should once again be my goal. The second was that I hated the idea of spending one more far-too-expensive day inside a classroom.

So I dropped out and started writing on the Internet. I had no connections, no resume, and no clue of how the Hell I was going to write for a living, so I reckoned the only possible option was to just start banging articles into this keyboard, and work at RadioShack to pay the bills. Those years weren't all that fun. I was pretty damn broke, and even as my writing improved, it eventually looked more and more likely that my career path would end at "RadioShack manager."

But still -- thanks largely to my pals here at Progressive Boink -- I didn't quit. I couldn't let them down, and I couldn't let myself down. And somehow, I eventually found a job writing for a living. I've had this job for years now, and several times a week I stop and think, "wait, I have this job? Me?" The week that goes by without me saying that is probably the week all this should be taken away from me, because the privilege of writing for people and making a living of it is one that nobody could possibly deserve.

No one makes it here without help from others, either, but I keep this keyboard around as a reminder of the weight I did pull. I'm prouder of that than anything.

GET TO THE REMOTE-CONTROL TOYS ALREADY YOU SENTIMENTAL B*TTHOLE 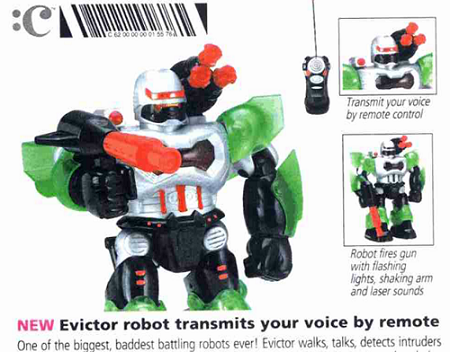 This guy was awesome. You'd say, "fire!" into the remote, and those little orange missiles would shoot. My only quarrel was with the name, really. A robot called "Evictor" should have the following functions: 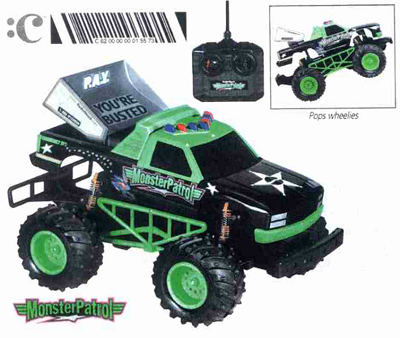 Take note of the hostile theme running through RadioShack's line of remote-control cars. "YOU'RE BUSTED." Yes, you caught me, I bought a last-minute impersonal birthday gift for my estranged son and I forgot to buy the battery for it. No need to get shitty about it, all right? 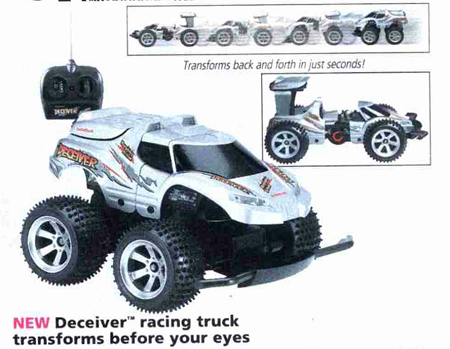 THIS CAR HAS GROWN SIX INCHES LONGER FOR NO APPARENT REASON! I HAVE BEEN DECEIVED! BEGONE, ROBO-JUDAS 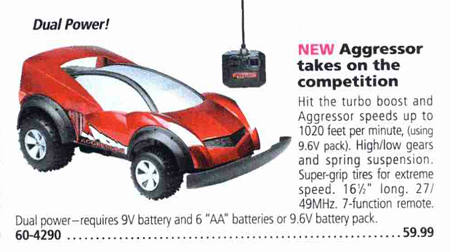 "Aggressor." Jeez, RadioShack. I mean, I'm in this remote-control car game to race around, maybe do some stunts or something. Couldn't you give these cars normal names, like "Trickster" or "Turbo" or something that reflects that? I'm not trying to fuck anyone up or anything. With a name like "AGGRESSOR" I feel like I'm supposed to go around town with this thing, run it into peoples' legs, and give 'em the "SUCK IT" gesture. 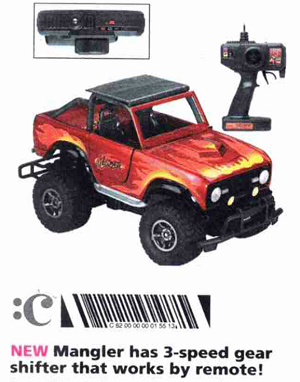 Evictor, Deceiver, Aggressor, and now Mangler. This didn't make the 2002 catalog, but for a while we sold a car called the "Violator" as well. This is more of a toy industry thing than simply a RadioShack thing, though. They just love conflating "neat stuff" with "FUCK YOU I HATE YOU I'M GONNA KILL YOU." Why can't a neat-o remote-control car just be a neat-o remote control car? Why does everything you market to boys have to be all Billy Badass? Even the remote looks like a gun. WHAT DOES A CAR HAVE TO DO WITH A GUN? WHAT IS WRONG WITH YOU PEOPLE 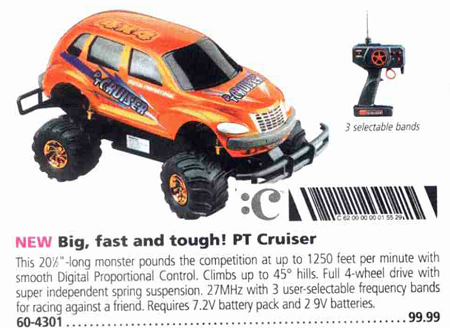 For the 2002 Christmas season, and for reasons unknown, we were sent tons and tons of these. Our store had well over a hundred of them. And almost none of them sold, because nobody likes PT Cruisers.

I do, in the broad sense, applaud Chrysler for at least trying to do something aesthetically different, because these days, 95 percent of cars on the road look exactly the same. At this point, a clean 1989 Volvo looks like the baddest car on the road, simply because it looks different.

But, I mean ... the PT Cruiser looks like it comes with a polo shirt and a set of golf clubs. It signals to others on the road, "Hello, I have a moderate amount of wealth but have absolutely no sense of style." You know?

For some reason, they kept sending us more of these Cruisers, until that February, when we had well over 200 of them. Radio Shacks are not large spaces, and we ran out of space to put them all in the back, so we ended up having to create eight-foot-tall display stacks that would inevitably fall over every few days. We reduced the price to $50, then $30. No dice. Nobody wanted them.

We tried to sell a lot of worthless crap nobody wanted, actually. Around that time, RadioShack sort of ditched its dedication to quality. We sold $50 Monster cables in what can only honestly be described as a scam. We sold crappy, ultra-cheap home theater systems with paper speakers that stopped working after a month. We would sell TVs, but our stores were so small that the only TVs we had were the display models that had been playing the same DVD 14 hours a day for a year straight.

A lot of people wonder how the Hell RadioShack is still in business. The answer: cell phones, basically. Most RadioShacks are glorified cell phone stands. They'll make money off their other stuff if they can, but everything else is just a play to get you into the store so the employees can try to sell you a phone. They make (or at least, made) anywhere from $10 to $40 every time they sell one, and it's essentially their only hope of making more than $6 an hour.

That's not a bad model. It's just a weird one, and RadioShack is a weird company. I never would have guessed in a million years that this company would outlast Circuit City. Damn, I mean, if Best Buy doesn't turn things around, RadioShack might outlast them too.

Welp, it's been a fun read through this catalog. It's reminded me of two things: first, that working there wasn't so bad sometimes. And second, that it was really bad a lot of the time.