Survey Results: We Paid $5 Or So For Radiohead's 'In Rainbows,' And We're Cool With It.

Share All sharing options for: Survey Results: We Paid $5 Or So For Radiohead's 'In Rainbows,' And We're Cool With It.

About two weeks ago, I asked y'all to complete a survey about In Rainbows, Radiohead's seventh studio album. As you might remember, they threw the conventional distribution format out the window, and asked fans to pay whatever they felt like for a digital download of the item. Meaning, you could have paid $10, or $100 ... or $0, if you felt like it.

So how much did we pay for In Rainbows? And were we fair to them? After collecting nearly 300 surveys, I crunched the data. 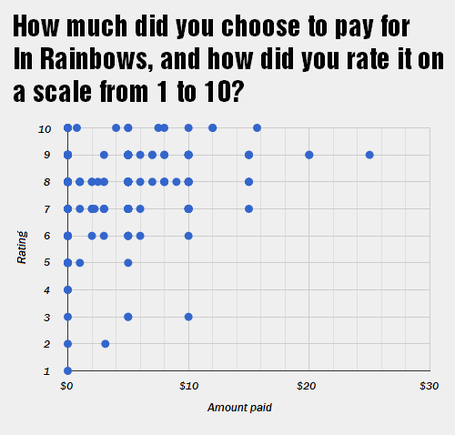 Not shown here: someone surveyed actually claimed to have paid $50. Anyway, this reflects a trend I expected: those who regarded the album more highly were more likely to have paid a few extra bucks for it.

Of the 183 people surveyed who obtained the album from Radiohead's website, 72 of them -- 39 percent -- decided to pay absolutely nothing for it. The average amount paid was $4.38.

Alright, so, next question: how fair do we think we were to Radiohead? Here's another chart: 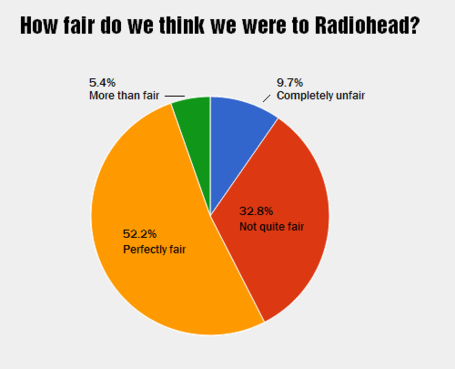 I struggled with this one. See, I paid $0 flat. I could have paid something, but I was pretty broke at the time. And honestly, I reasoned that Radiohead didn't set a minimum for people like me -- people who were broke as Hell at the moment and could use a break. That's just me projecting my rationale on to theirs, of course, but I've always been really appreciative of them.

You know? There are plenty of bands out there who would have been shitty about it, or at least tried to get a little dig in -- like, maybe if you proceeded to check out with a $0 price tag, it would have shot you a message like, "enjoy it, cheapass," or something. Nothing of the sort from Radiohead. Same treatment, whether you paid $0 or $50. I thought that was as cool as it was interesting.

All that said, I count my treatment of Radiohead as "perfectly fair," despite paying nothing.

And just for fun, here's how we rated In Rainbows. 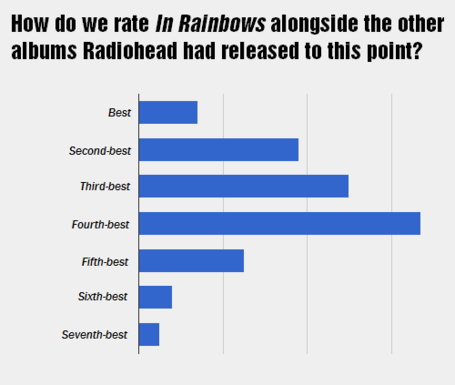 Third- and fourth-best were the most popular options, probably because a lot of us are unwilling to bump the OK Computer / Kid A tandem from our rankings.

Personally? This is certainly liable to change, but I think I have to place it third. "Weird Fishes" was one of the best songs they've ever produced. "Bodysnatchers" is a jam. "Nude" and "House of Cards" are beautiful. "Videotape" was incredible ... although it was a completely different song, and 10 times better, when I saw them live. The second half of the album, which I sort of regarded as a B-side, was pretty damn good for a B-side.

Thanks once again for filling out all these surveys, friends. No major surprises here, but I found it interesting nonetheless.