Ahem. Well, last week I started my review of the 2002 RadioShack catalog. In case you weren't sufficiently repulsed and weirded out by the thoroughly crappy electronics we purchased a decade ago, we return today with Part 2.

This part of the catalog features a few shining examples of RadioShack's time-honored tradition of totally and shamelessly ripping you off. I, a former RadioShack employee, will walk you through it. Enjoy! 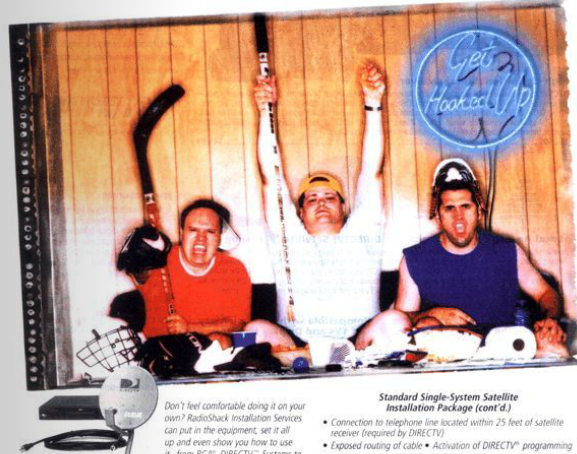 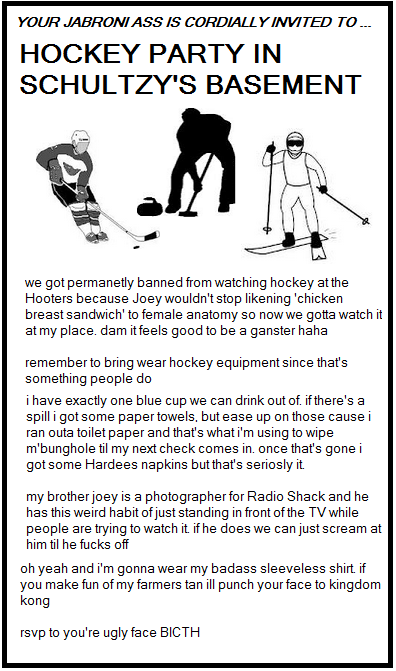 Friends, I personally sold you hundreds of these, and y'all got so mad at me.

Let me first explain what the Hell this is. It's called an RF modulator. You know those yellow, red and white cables you used to hook up your DVD player to your TV? Those are called composite cables. A lot of TVs from 10 years ago didn't have those inputs, just the little screw-in cable jack. This little box let you hook up the former to the latter.

Three things about this pissed you off. First: if your TV was too old or cheap to have composite inputs, it probably meant you didn't have a ton of money to throw around. And of course, you needed this thing in the first place because you just sunk anywhere from $100 to $300 into a DVD player or PlayStation 2 or something. And now you have to spend 30 more bucks just to get it to work? Bullshit! And I know that's bullshit, and I'm sorry.

Second: the RF modulator did not include the cable you needed to actually hook it up to the TV, which was sort of an unforgivable sin on our part. You had to spend another $5, minimum, for one of those. So now you're spending around $38 with tax just for the privilege of using this expensive-ass thing you already bought.

Third: often times, we at RadioShack would totally forget that you even needed that cable. So you'd spend too much money on this piece of shit, drive home, try to hook it up, realize you didn't have the cable you need, and have to drive all the way back out to my store for it. Again, I'm really sorry.

Now, sometimes you got really pissed. And if you did ... OK, listen, I'm going to flip ahead in the catalog for just one second:

As I said, some of you got especially pissed off when I told you you needed that RF modulator. "It's just cords!" you said. "You're just trying to screw me into buying this thing. I guarantee I can look through this store and find something a lot cheaper." So you'd go to the back of the store, where we kept all the drawers full of little parts and converters and connectors and stuff, and a few minutes later you'd emerge with this:

"See?" you said. "Same thing. Exact same thing." And yes, I mean, it did allow you to physically connect one of the composite cables to the screw-on jack. You weren't wrong about that. But when I tried to explain to you that it was about more than physically connecting a piece of metal to another piece of metal, you thought I was bullshitting you. "Ring me up for this. Guarantee you it'll work."

It never worked. Never, ever. So now, not only were you pissed off for the reasons I laid out above, but your pride was also damaged. When you came back and exchanged this piece for the RF modulator, you always went to a different store to do the deed. You were too embarrassed to come back and talk to the same person you told off the day before.

As an aside ... this little piece that cost $2.49? I have no fucking idea of what anyone would ever use it for. It was like RadioShack slid that into their stores as a red herring. Like it was some Machiavellian plot to lure you into hubris, destroy your ego, and remind you how much smarter we were than you. Sorry. God, I'm sorry. 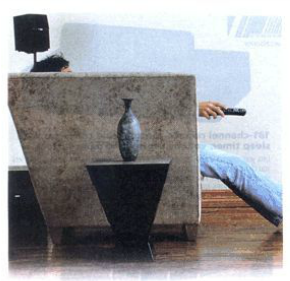 Wow. This is some high art. I mean, it must be, because I just don't get it. Why would you want a sofa with ludicrously high armrests like that? And with the armrests so high, how does that end table serve any practical or aesthetic purpose? I just don't ...

... ohhhhh. Wait. Those are Wranglers, aren't they? I'm seeing Wal-Mart jeans, and I'm seeing an incongruent mishmash of expensive art deco furniture, and it adds up to ...

... alright, I'm gonna go, with "you deal Oxycontin." Fair? You geeked up on your own shit, went on a shopping spree through a suburban strip mall, and managed to go Wal-Mart --> Pier 1 Imports --> RadioShack (to buy exactly one rear speaker and one subwoofer, because "that's all you really need, when you think about it") before power-napping on the bench in front of the Fantastic Sam's. I see you, pal. I see you.

Here is a little tiny thing you could use to convert one type of video cable to another type of video cable. We charged $20 for it. The actual amount of money it cost RadioShack before being marked up: 63 cents. We were careful to pick our spots, but sometimes we just wanted to job the shit out of you. 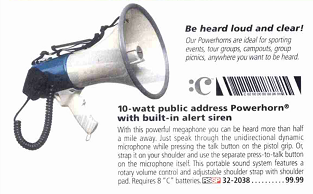 I spent the majority of my RadioShack career in a store in the mall. Business in mall stores is infamously volatile, and depends largely upon how well the mall as a whole is doing. During Christmas season, we took in tons of money. In July, we might get like 10 people in the store the entire day, many of whom just wandered in from the mall to kill some time.

And man, if you were a manager, this broke you. Mentally, physically, spiritually. Pay for a manager was insulting low, and the demands and sales expectations were unreasonably high. Across a two-year span, I think I had about 10 managers there. Some of them desperately begged for a way out, even taking a demotion to work at another store if need be. A couple others just completely gave up, and just spent their time looking for other jobs online, waiting to eventually be fired.

One of these managers ... I'll call him Josh. We became friends. After two months of being understaffed, having to work 75-hour weeks, and seeing sales plummet, he just completely checked out. He made no secret of it, either. Sometimes he'd go to the back room and nap for an hour -- even if he was the only employee in the store. People stole stuff off the walls, but he just didn't give a shit.

A week or so before he finally walked out out for good, I arrived for work to find him sleeping in the back. So I pulled this bullhorn out the box, set it to alarm mode, and let 'er rip. I want to stress: this thing was LOUD AS SHIT. And man, Josh looked like he was struck by lightning. He shot straight up out of his chair and just started screaming, and I laughed harder than I ever have in my life. Couldn't breathe. Thankfully, he eventually started laughing too.

"Here's your dang electro-Bible. Wait, you want to actually understand it? That'll be 20 more bucks, asshole."

OH HELL YES Y'ALL DON'T KNOW SHIT ABOUT THIS SHIT 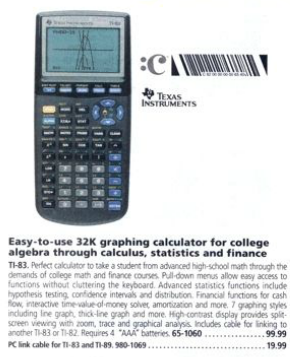 If you had one of these TI-83s, you know how amazing they were. In high school my friends and I used to hook them together and bet on competitive Tetris matches. I accrued massive amounts of dork-cred by writing an RPG game on this thing when I was 16. Basically, you -- represented by a dot -- walked around a crude map of my high school, and you went around and battled various actual teachers who served as "bosses." The game was peppered with unflattering jokes about various teachers that threatened to get me in trouble at some point.

It was passed all around the school. One day, one of my teachers pulled me aside after class. "You were the one who made that calculator game, weren't you?" I froze. I thought I was dead. "Uh ... yeah."

"I was just playing it on my calculator. It's great. I wish you made me more powerful, though. I die too easy!" And that right there was the highlight of my entire experience in the public education system.

Alright, we're through about 300 pages. Time for another break. I'll return for the rest next week. And again, if you missed it, my review of the first 100 pages can be found here.