Wikipedia Brown, And The Case Of The Smashed Snow Globe.

Share All sharing options for: Wikipedia Brown, And The Case Of The Smashed Snow Globe.

Idaville was the safest and most crime-free town in the country. Every would-be crook, young and old, knew better than to try to pull off one of their capers in Idaville. It may seem strange, but it was all due to a fifth-grade boy named Wikipedia Brown.

Wikipedia Brown was the son of Idaville's police chief, and the family lived on Rover Avenue. "Wikipedia" was just a nickname, of course. His family and teachers called him by his real name, Leroy. But every child in town knew him as the smartest boy in Idaville. They called him Wikipedia Brown because he had memorized every page on Wikipedia.

Wikipedia Brown set up his own private detective agency in his garage. Anyone who wanted to hire him could come by the garage and pay a quarter, and they'd receive the services of Wikipedia. Wikipedia's best friend was a girl named Sally Kimball, who also acted as a bodyguard when Wikipedia took on a particularly dangerous case. Sally was the toughest girl in Idaville.

One day, Wikipedia and Sally were sitting in his garage. It was a particularly warm and muggy summer day, and Wikipedia was dozing in his chair. Sally idly thumbed through a well-worn magazine. Suddenly, there came a knock at the garage door. In walked Colin Thompson, one of Wikipedia and Sally's classmates. He timidly placed a quarter on Wikipedia's desk.

"I'd like to hire you, Wikipedia," said Colin meekly.

Wikipedia sat up straight and looked at Colin.

"What seems to be the trouble, Colin?" asked Wikipedia.

"It's my father's snow globe collection," answered Colin, in a voice so low they could barely hear. Colin seemed to be on the verge of tears. Sally and Wikipedia cast a knowing glance at one another. It was well-known that Mr. Thompson owned the largest snow globe collection in all of Idaville.

"W-well," Colin began, "I was playing in my side yard when Bugs Meany came by and saw me."

Wikipedia's ears perked up at the name. Sally scowled and clenched her fists. Bugs Meany was the leader of a gang of teens who called themselves the Tigers. Bugs was constantly a thorn in the side of Wikipedia and Sally, and never seemed to learn his lesson.

"He started acting real nice to me," Colin continued. "I thought it was strange since he's usually so mean. He said he wanted to see my dad's snow globe collection. I figured it couldn't hurt, so I showed him around. Bugs seemed very interested and polite. He only looked around for a couple of minutes and then he left." Colin's eyes welled up with tears. "But when I went back in the room a few minutes later, I noticed that the prize of the collection had been smashed: my dad's Wizard of Oz 50th anniversary snow globe was smashed to smithereens!"

Wikipedia shrugged. "Bolger's studio contract stipulated that he would play any part the studio chose; however, he was unhappy when he was cast as the Tin Man," said Wikipedia. "The Scarecrow part had already been assigned to another lean and limber dancing studio contract player, Buddy Ebsen. In time, the roles were switched. While Bolger was pleased with his role as the Scarecrow, Ebsen was struck ill by the powdered aluminum make-up used to complete the Tin Man costume. The powdered aluminum badly coated Ebsen's lungs, leaving him near death. Ironically, Ebsen would outlive all the principal players of Oz. Ebsen's illness paved the way for the Tin Man role to be filled by Jack Haley. Bolger would spend most of his time on the set of The Wizard of Oz locked in his trailer, doing cocaine. [citation needed]"

"What happened after you noticed the snow globe was smashed?" asked Wikipedia.

"I came right here," answered Colin. "I knew that if anyone could prove he did it, it would be Wikipedia Brown."

Wikipedia picked up the quarter and put it in his pocket.
"We'll take the case, Colin," said Wikipedia. You can be sure that we won't rest until Bugs has been brought to justice."

"Will you take us to the scene of the crime?" asked Wikipedia. 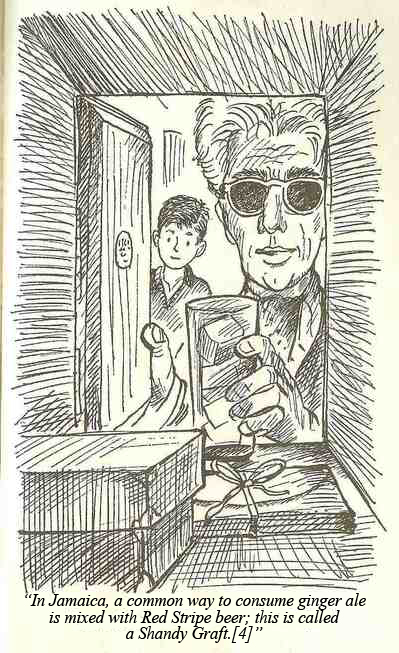 Mr. Thompson's snow globe collection was kept in a small den. Shelves lined the walls and were filled with more snow globes than Wikipedia had ever seen. He whistled.

"It sure is impressive," said Sally. "I've never seen so many snow globes before!"

"They're quite impressive, Sally," agreed Wikipedia.
"Perhaps more than you think. Today's snow globes can include music boxes, moving parts, internal lights, and even electric motors that make the "snow" move so that it is no longer necessary to shake the globe. Some also have central slots for positioning items such as photographs. A number of contemporary fine artists, in particular, Walter Martin and Paloma Munoz and Ligorano/Reese are using snow globes as a medium to comment on social and political issues. Both artist teams create snow globes as sculptures having ironic connotations.[citation needed]"

"It's over there," said Colin. He pointed to a prominent shelf but averted his eyes. It seemed as though he couldn't bear to look.

Wikipedia and Sally examined the smashed remains of a snow globe. water and bits of Styrofoam "snow" covered the shelf amid pieces of broken glass. A tiny resin Scarecrow lay face-down amidst the carnage.

"I don't know how Bugs could have taken it," wailed Colin. "I didn't turn my back and I never even saw him take his hands out of his pockets."

"Hmm," said Wikipedia. "I'd like to take a look around outside." 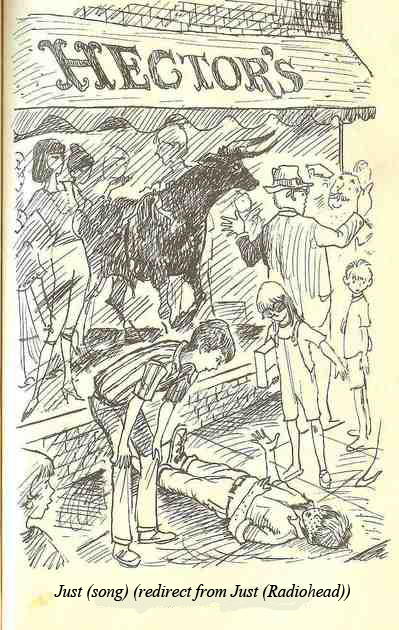 Wikipedia and Sally followed Colin to the side yard.

"You say you were out here, playing?" asked Wikipedia.

"Yes, that's right," answered Colin. He shifted his eyes from side to side and looked nervous.

Wikipedia crouched down in the grass, looking at a toy Jeep and tractor on the grass. He glanced up towards the street. From this vantage point, he couldn't see the sidewalk at all. He looked over and saw something in the grass.

"What's this?" asked Wikipedia. He carefully reached down and plucked at something on the ground. Colin craned his neck to look. Wikipedia held up a few pieces of clear, curved broken glass.

Colin swallowed. "Bugs must have dropped the broken glass out here while he was making his getaway!"

Wikipedia looked at Colin, then closed his eyes and thought for a moment. Colin looked at Sally nervously. Sally smiled. She knew that Wikipedia was working hard on finding the answer. Finally, Wikipedia opened his eyes.

"Colin," said Wikipedia, "I think this has gone far enough."

"W-what do you mean?" asked Colin.

"You broke the snow globe and you are trying to frame Bugs Meany in order to avoid getting in trouble. Confess."

How did Wikipedia know? Turn to the end to find the answer.