The Two Guys Not Wearing 'One Thunder' Shirts Meet In The Concessions Line: A One-Act Play.

Share All sharing options for: The Two Guys Not Wearing 'One Thunder' Shirts Meet In The Concessions Line: A One-Act Play. 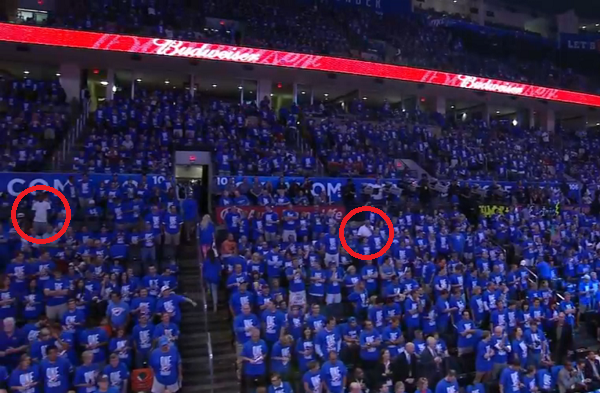 CRAIG: Where'd you get it?

JOHN: I think my wife got it at the Kohl's.

CRAIG: You never told me you had a wife!

CRAIG: Sorry. I know. I'm bad at this shit. I don't know how to have a conversation with a stranger. It's just ... you're the only other person in this building who isn't wearing one of those "One Thunder" shirts. I thought I should say something.

[JOHN turns around to face the front of the line. Two minutes pass.]

JOHN: [turns back around] I can't talk to anybody here. Everyone just wants to talk about their shirt. All my friends came with this same shirt on. They keep goin' all like, "what size shirt did you get?" "I got Large." "Well, I got Medium." "I'm glad we're wearing the same shirt." "I'm glad you look like me." "I am too."

CRAIG: Yeah, same. Every time I try to start a conversation it just turns into, "hey, my shirt is machine-washable. Isn't that great? It's 100 percent cotton. What's your opinion on it being 100 percent cotton? Mine is that it's good."

JOHN: I don't know why everyone wants to dress the same.

CRAIG: Well, it's obviously because it's a promotion kind of thing with the team--

JOHN: I'm gonna be dead soon. I'm 38. In 100 years I'm basically definitely gonna be dead. Science might catch up, but even if it does, it just means I'm gonna be a wrinkled-ass bean for a while longer ... I don't want to be dead, but I'm not depressed or sad about it either. Is that the way to be about it?

CRAIG: What? ... Man, I don't know. You think because I'm the only other person not wearing the Thunder shirt, I'm supposed to know what to tell you?

[The crowd's roars echo through the concourse. "DURANT!" rattles from the PA system. CRAIG and JOHN lookthrough the tunnel and sees a faceless mob of people in blue shirts, standing and cheering.]

CRAIG. I killed this wasp today.

CRAIG. Yeah. Me and my wife moved into a new apartment, and I don't know how everything works yet, you know? Like, where the switches are, where all the light belongs, all that. I'm putting all our stuff into the fridge, and I see a shadow on the wall, like something is dangling. So naturally I reach my hand up because I think it's the lamp cord. It's just a wasp.

JOHN: Did it bite you?

JOHN: You know what I mean.

CRAIG. It didn't bite! It just kind of kept hovering around, exploring. The way those things fly, man, it's so creepy. It's the limbs, I think. Their arms and legs just dangle still as they float around. I don't know why that creeps me out, but it does.

JOHN: So you killed it anyway.

CRAIG. It landed on the wall and just started crawling around. I thought it was what I was supposed to do. Got the bug spray and let him have it. He dropped off the wall like that. [CRAIG snaps his fingers.] But he wasn't dead. He was on the floor, lying on his back, just wiggling his arms and legs around.

JOHN: He was in pain then, right? What did you do?

JOHN: You did it before I did.

CRAIG. I stomped on him. He was in pain for like five seconds. I felt bad about it.

JOHN: If he had a narrative in mind, I doubt that was part of it.

CRAIG. It's never a part of it, man. We aren't wired to understand death. Maybe if humans had to actually figure out how to be dead people, evolution would have wired us that way. But there isn't much to figure out. You just lie there and don't say anything.

JOHN: And I guess that's just fine anyway, right? You can't really be in wonder of something you know everything about ... I don't want to be some sort of all-knowing God or something. I just want--

THUNDER FAN. HAAAAY WHY AREN'T Y'ALL WEARIN' THE THUNDER SHAHRTS?

CRAIG. We went to Kohl's.

THUNDER FAN. WILL YOU TAKE A PICTURE OF ME AND JACOB AND MEGAN?

THUNDER FAN. JACOB IS MY BEST FRIEND. MY BEST. FRIEND.

JOHN: Hey man, I need to get back.

CRAIG. Well, it's been an actual conversation. I wish it could have been longer.

JOHN: Me too, friend.

CRAIG. So do I just hit the camera button ... wait, that just turns it around to the other camera ... okay, hold on. You ready?

THUNDER FAN. MAKE SURE TO GET OUR SHIRTS IN THE PICTURE!

CRAIG. What kind of fucking question is that?