Holiday Mixtape: Rudolph, the Temptations, and the California Raisins

Share All sharing options for: Holiday Mixtape: Rudolph, the Temptations, and the California Raisins

One of the last things I remember doing before moving out of my parents' house years ago was round up all of their Christmas music and put it onto an iPod. It was October, but it was important. I'd never known a December without Christmas music playing almost constantly in my house from Black Friday to Boxing Day, and I wasn't about to start on my first Christmas alone, 1,000 miles away from my family.

Now, I own about two dozen different versions of "Rudolph the Red Nosed Reindeer." But this one by the Temptations in 1968 is, by far, my favorite.

Rudolph the Red-Nosed Reindeer - The Temptations (via westphillysoul)

"Rudolph" was my favorite Christmas special growing up, to the point where I covered up the black nose of the reindeer-shaped stocking I got from Burger King with a piece of paper I cut out and colored in with an almost dried-out red Crayola marker. What good was a reindeer-shaped anything if the nose wasn't red?

This version of the song, and only this version of the song, was my jam. All of the other, other, other versions are OK. Some are not so OK. One version has Jewel go crazy in the middle of it and start singing BADOING DOING like a spring came loose. Too many (more than zero) compare Rudolph's nose to a light bulb. The most annoying version is Goofy being interrupted by Mickey and Minnie Mouse, but instead of doing the light bulb thing, they say things like "It certainly was!" and "That's not very nice!" And, according to a quick and not at all scientific search on AllMusic, there are about 2,000 more recordings. That's almost one version for every year since Christmas was invented.

The Temptations scrapped the happy little tune to "Rudolph" and belted it out like it was actually important. They sang a song about a bullied reindeer with the same amount of soul as "Silent Night" and the stop-shooting-at-each-other-you-jerks anthem, "Someday at Christmas." Rudolph's central theme was "it gets better" decades before It Gets Better's central theme was "it gets better," and the Temptations actually sold it that way. It got better. Even Santa was no longer asking Rudolph to light the way through a foggy Christmas Eve; he was telling him, "Come on and guide my sleigh!" Do it. Do it now.

Fellow holiday song hoarder Emily asked me, specifically, for this version of "Rudolph" a few years ago.

OK. No she didn't. It was just close enough to what she really wanted. She really wanted the one by the California Raisins from "A Claymation Christmas Celebration."

This is our actual jam. It's clearly a cover of the Temptations' version, but nearly 2 decades removed, it's a tiny bit more fine-tuned. There are minor details that somehow sound better and more timeless coming from a bunch of singing, clay raisins. Which is saying something, considering "Claymation Christmas" just might be the most 1987 television program ever. 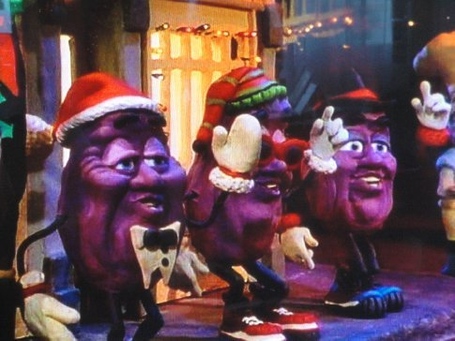 My Christmas doesn't get to be over until the California Raisins miss their bus, make a sleigh out of garbage and fly it into space. Neither should yours. Thank you, Temptations, for making me feel feelings about that wimpy deer.